Review: Over the Top by Rebecca Zanetti 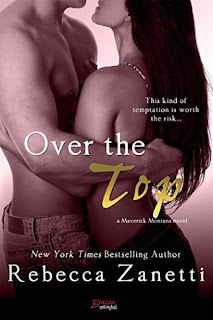 This kind of temptation is worth the risk...

Dawn Freeze had a huge crush on Hawk Rain for years, and the entire town knows it. It's understandable?the man is total hotness. That tall, lean body. Intense dark eyes. And always one foot out the door. Now he's on leave for exactly one week. And this time, he's made it crystal clear that he only wants one thing. Her.

Hawk's been fighting his attraction to Dawn for as long as he can remember. She's his best friend's little sister, and that means hands-off. Except now she's all grown up, and her sweet sexiness is exactly what he craves. But just as Hawk allows himself one mindblowingly intense night with Dawn, he learns that everyone he loves is in danger. Especially her.

And the only way to protect Dawn is to push her away...

This one was not bad, but not that great either. It's a companion novel, the fourth in the series, but I feel like I'm really missing something in this book. I didn't enjoy this book nearly as much as I'd hoped, especially since I've heard so many great things about this author (this is my first novel of hers that I've read). I think Zanetti is an accomplished romance writer, but this one wasn't entirely for me!

Dawn has had a crush on Hawk for years, and now that he's back in town, it seems like her crush has strengthened enormously. But he's only in town for a short time before he goes back to hunting a criminal drug lord. Hawk has been attracted to Dawn for quite some time as well, but he knows better than to mess around with his best friend's sister - especially since she's got other brothers, and they're all friends. But Dawn and Hawk throw caution to the wind and decide to act on their desire for each other. But Hawk isn't planning on staying in town - will Dawn wait for him? Will one week together be enough?

Another thing I really liked was some of the secondary characters. I'll get to Dawn and Hawk in a second. But there was this set of old ladies, whose names I can't quite recall at the moment, who were exceptionally hilarious. They kept pushing Dawn to do this or that with Hawk or to Hawk, in order to get the pair together. They had rules and advice and guidelines for Dawn to follow, like the best way to a man is through his stomach, or let him rescue you sometimes, or things like that. These ladies were everything in this book!

I really like Hawk - he is alpha to the core, a bit of a control freak (more so than your usual alpha), and very swoonworthy. I believe he used to be some sort of military personnel (or maybe he still is?), and right now he is hired to track someone down. Which is one of the reasons he doesn't want to start anything with Dawn - his current job is dangerous. And he has to hunt this guy, so he'll be leaving. Also, if things don't work out with Dawn, then he loses her AND his best friends (her brothers). I liked Hawk, even with his controlling nature. It wasn't demeaning, in my opinion.

I didn't really like Dawn though. More on that below.

Overall, the romance in this book was really steamy and chemistry-filled. The scenes were tense and hot. There was also a great deal of humor in the story, and some feels. I liked the book, but I just didn't get into it as much as I would have liked to. Still, I enjoyed the story!

Well... I didn't like Dawn very much. At first I didn't really mind her, she seemed sweet and kind. But then I realized, she's actually stupid. She thinks she can take on a criminal, a drug lord? She thinks she can "take care of herself" or "handle herself"? Honey, please. I bet you've never even held a gun before. Self-defense only goes so far. This attitude of hers really, really bothered me, throughout the entire book. Like she could actually do s*** if the criminal came up to her with a gun at her temple. How dare she blame Hawk for wanting to leave and protect her by not drawing danger to her? He's been honorable and she's being a b****. And then she wants to complain about how he's a control freak? He's "bossing you around" because he wants to protect you from things/people that are ENTIRELY TOO DANGEROUS FOR YOU.

So I thought Dawn was naive and stupid. And selfish too. But that's the way the author wrote Dawn, and I think it was supposed to be very feminist and independent. Personally, I think it came off as naive and dumb. Straight-up zero common sense.

Beyond that, I couldn't really get into the story. The romance was hot, don't get me wrong. But the story itself, with the drug lord and the crime and hunting him down - that seemed off to me. It's like the author didn't take this plot seriously. It seemed to casual for Hawk to be hunting someone down. So I couldn't really get into the story. It's like the author had a hot romance, and she had an idea of a high-stakes story, and she wanted to shove the two together. It didn't really work, in my opinion. Maybe I needed to read the first three books in the series, to get a better feel of the setting and overall story? I don't know.

Meh. Maybe not. This isn't Brazen's best novel, by far. It's getting three stars because I actually did really like the romance (the chemistry was steamy!), and there were parts of this book that were hilarious and totally worth rereading. But overall, I could recommend a slew of other Brazen books that were much better than this one!

2.5 stars -> rounded up to 3 stars. Perhaps I'm feeling generous. I think I trust Zanetti to write a good romance. Not sure about a good story though, outside the romance. But I think I'd read more books from her.