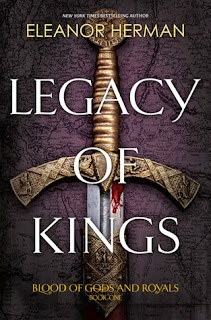 Imagine a time when the gods turn a blind eye to the agony of men, when the last of the hellions roam the plains and evil stirs beyond the edges of the map. A time when cities burn, and in their ashes, empires rise.

Alexander, Macedonia’s sixteen-year-old heir, is on the brink of discovering his fated role in conquering the known world but finds himself drawn to newcomer Katerina, who must navigate the dark secrets of court life while hiding her own mission: kill the Queen. But Kat’s first love, Jacob, will go to unthinkable lengths to win her, even if it means competing for her heart with Hephaestion, a murderer sheltered by the prince. And far across the sea, Zofia, a Persian princess and Alexander’s unmet fiancée, wants to alter her destiny by seeking the famed and deadly Spirit Eaters.

Weaving fantasy with the salacious and fascinating details of real history, New York Times bestselling author Eleanor Herman reimagines the greatest emperor the world has ever known: Alexander the Great, in the first book of the Blood of Gods and Royals series.

Prince Alexander is named regent in his father's absence. The tournament has just begun, yet danger is all around Macedonia. Hephaestion is Pella's champion in the tournament, and Alexander's best friend. Cynane is Alexander's half-sister, who tries to turn Hephaestion against Alexander. Katerina is an orphan in Erissa, a friend of Jacob. Jacob is a contestant in the tournament, who is in love with Kat and wants to make a better future for her, should she agree to marry him. Zofia is a princess who is in love with a soldier, but will be given to Alexander to marry, if she does not find the Spirit Eaters and change her future. This is a complex story with so many intertwining lives and so much at stake.

I LOVE ancient history. Anything medieval, ancient, etc. History is one of my favorite subjects, and so it's no surprise that historical fiction is one of my favorite genres. Ancient Greece and Ancient Rome has always fascinated (one of the first stories I ever wrote as a child was set in Ancient Greece!), and ancient times in Macedonia is a time of particular. I LOVE the story of Alexander the Great! So I was excited to see what Herman came up with, in Legacy of Kings.

While I am giving this book three stars, it is not in disappointment! I liked this book and will certainly be reading the sequel come next year. The setting is very high fantasy esque - with kings, queens, betrayals, scheming (SO MUCH SCHEMING), swords, fantastical creatures... it's easy to mistake this for more of a high fantasy novel than anything else. This seems to historical fantasy! Herman mixes magic with history, and it is quite alluring!

There are a lot of characters in this book (see my note on this in the next section). Kat is introduced first, so I think of her as the primary protagonist of the story (though she probably isn't - the bajillion protagonists in this book are likely of equal importance). I liked Kat the most anyway - she is calm and calculating, kind and selfless. She isn't in love with Jacob, her childhood best friend. But she accompanies him to the tournament, and she is noticed by the prince. Alexander takes her into the palace, all on a whim.

A lot of things in this book are based on whims. Kat came with Jacob because it felt like something she needed to do. Alexander saved Kat and brought her to the palace because something about her mystified him. The queen didn't investigate a disturbance outside of her window because she didn't feel like she had to. The characters of this world rely on prophecies and intuition and the gods, so they often do things based on feelings and intuition.

I liked Alexander a lot. He is scarred in the leg, and this is apparently not good luck. Everyone does not want him on the throne because of this deformity, which is so unfair. He is more than capable, more than competent. He is an able-bodied fighter, and a smart prince. Alexander has a clever mind and a good, kind heart.

The story starts off rather slow (see below), but it picks up around the one-fifth mark, and I finished pretty quickly after my interest was piqued. I didn't want this book to disappoint me, and I knew I would finish it regardless. Nevertheless, I had no problems finishing the book.

Romance - there is little romance in this novel. Jacob is in love with Kat from the start, but Kat is not in love with him. Nor does she really fall for anyone. Zofia has her own love story, but that looks like it's not going anywhere. Also, she is supposed to be getting engaged to Alexander at some point, so we'll see if that happens or not. I do have a main ship, but I will not mention the names in the review.

I LOVE how this book finishes. All the deceit comes to light, especially in terms of Hephaestion and Cynane. Alexander finds out something very important, as does Kat. Cynane might actually get what she deserves. Zofia might not. So much happens at the end, it was hard to keep up! Not in a bad way though. I cannot wait to read Empire of Dust - if only to find out more about the title! But seriously, I anxiously await the sequel!

Several things made the rating of this book drop. The most significant - the sheer amount of perspectives this book had. What hurt the book most was the amount of points-of-view the author employed. All third-person, which was probably good, given the amount of perspectives. Kat, Alexander, Hephaestion, Cynane, Zofia, Jacob... I think those were all? Six. Six different POVs. That was waaaay too many. The story felt disjointed and disconnected at first. The pieces didn't fit together, the perspectives didn't make sense against one another.

As the story went on, things started to make more sense. But at first, the book was very slow, and it did not help. I was not getting into the story, especially with so many switches in perspectives. There were way too many perspectives, and the beginning was way too slow.

We need more answers! I'm sure the author will answer a hundred of my question in Empire of Dust, but one of the most frustrating things about reading this book (WHILE reading it) was the feeling of not knowing everything. And yet, some things were very obvious (like the green eyes).

My biggest problem was definitely the number of perspectives though. That was crippling.

Still, despite the dislikes, I recommend this book. It is excellent historical fiction, with a generous side of fantasy. Did I mention magic? Kat, Alexander, and the queen have interesting abilities, as does Kat's mother, and some minor characters in the book. Oracles, Pegasus, hellions, and other supernatural beings abound in this book. Very cool stuff! An intriguing novel, worth the read, though you definitely have to muscle through the beginning.

3.5 stars -> rounded down to 3 stars. Again, kind of ignore the rating? 3.5 stars is more accurate than 3 stars. I liked this book, and will definitely be looking forward to reading Empire of Dust!