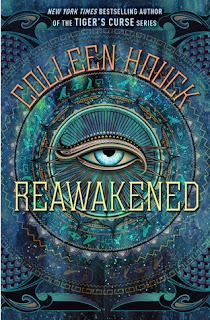 I was NOT expecting to like this book, to be honest. I mean, I wanted to love it, as with all books I request and start reading, but I had an awful time with Houck's Tiger's Curse series. I hated the books I read of that series (never finished it) - I couldn't stand the protagonist, the love triangle, the um, interesting take on Indian people and culture. In any case, I was wary of this one, but I am a sucker for Egyptian mythology and culture! And I'm so glad I gave this book a chance, because I really liked it, and want more!

Lily is a rich girl living in New York with her uptight, strict parents who control every aspect of her life, even if she has a ton of money. When she seeks refuge in the Met, she accidentally stumbles upon something strange - a mummy come to life! He binds to her life force, and she is all but forced to come with him to free his two brothers from the same predicament, in order to stop an evil Egyptian deity who is trying to destroy the world. Lily and Amon, the sun prince, will travel to Egypt in order to free his brothers and save the world.

I liked Lily pretty much from the start. I can't remember much about Kelsey, the protagonist of The Tiger's Curse series, but I think Lily is a much more likable girl. I thought she would come off as rich, snotty, pretentious, entitled, but I found that while I've never been in her position (in terms of money), I understand her. She's applying to college and is allowed to go only to where her parents want her to go. She agrees to help Amon without much pressure, though it is a weird situation to be in, with some random stranger claiming he's a demigod and needs to go to Egypt to free other mummies. n

I loved Amon. He is a sweet guy, caring and kind, who listens and hates taking from Lily. Because he is bound to her, from when he first woke up and drew her energy to sustain himself, he is able to take her energy and read into her at will. But he does not like taking from her, or knowing her personal feelings or thoughts. He is very unfamiliar with this millennium, so he has different customs and values. I could get used to a guy like him, really easily!

The world-building is so great! I absolutely adore Egyptian mythology and whatnot, and Houck really did her research and used her imagination to create a very unique story. There are many Egyptian mythological stories in this book, well-written and quite intriguing. Houck really captures Egypt (in my inexperienced opinion - I've never been to anywhere in Egypt). Even if everything was completely bogus and Houck made it all up - that's quite an imagination! She takes us through tombs, deserts, quicksand, pyramids!

And the plot of this book is very intriguing, fairly fast-paced, but not overwhelmingly so. We start in New York, and then end up in Egypt fairly quickly into the story. Lily and Amon travel to different parts of Egyptian, and I love their adventure! Even if it was dangerous and scary at times. There was also plenty of humor and heartwarming moments!

Hmm, speaking of heartwarming... there is romance in this novel. But it isn't quite romance. Lily and Amon fall completely in love with each other, yet there are no declarations of love or physical interactions of any sort until the very last few pages. But guys. The chemistry? The development of the relationship? The wondering-if-he-is-looking-at-me-like-that, etc.? Spot on. Houck does an AMAZING job of writing a romance that isn't physical or even expressed. The pair don't directly acknowledge what they have, though Lily pushes Amon. Amon has his reasons for not wanting Lily to want to be with him. You'd have to read this one to understand! I think I'm satisfied with the romance, I couldn't see it happening any other way. Also, the ending of this book has me curious about what direction the author is taking, with the romance. NO love triangle! Or insta-love.

Anyway! I am quite happy to say that I really enjoyed this book. It is nice to be proven wrong, but I had a feeling that I would enjoy the book, even though was also quite wary. But clearly it worked out for me!

Hmm, I'm not sure if there was anything specific? If this were a standalone, I might have been a bit peeved. But there is at least one more book, so I am satisfied with the ending. For now.

I would recommend this one! It's set in modern-day times, but has a strong Egyptian mythology/fantasy backing. Swoony hero, likable heroine, and engaging story? Win! I bet if you liked Kiersten White's The Chaos of Stars, you'd enjoy this one!

4 stars. Maybe 4.5 stars. I really enjoyed this book - again, much to my surprise! I'm so glad I did. I can't wait to read the sequel! Crossing my fingers that this series works better for me!