Review and Giveaway: The Boy Most Likely To by Huntley Fitzpatrick 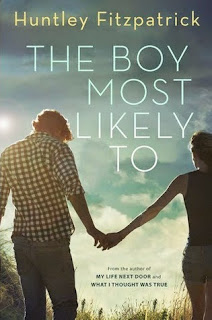 The Boy Most Likely To by Huntley Fitzpatrick
Book Two of the My Life Next Door series
Publisher: Dial Books
Publication Date: August 18, 2015
Rating: 3 stars
Source: eARC from NetGalley

Tim Mason was The Boy Most Likely To find the liquor cabinet blindfolded, need a liver transplant, and drive his car into a house

Alice Garrett was The Girl Most Likely To . . . well, not date her little brother’s baggage-burdened best friend, for starters.

For Tim, it wouldn’t be smart to fall for Alice. For Alice, nothing could be scarier than falling for Tim. But Tim has never been known for making the smart choice, and Alice is starting to wonder if the “smart” choice is always the right one. When these two crash into each other, they crash hard.

Then the unexpected consequences of Tim’s wild days come back to shock him. He finds himself in a situation that isn’t all it appears to be, that he never could have predicted . . . but maybe should have.

And Alice is caught in the middle.

Told in Tim’s and Alice’s distinctive, disarming, entirely compelling voices, this novel is for readers of The Spectacular Now, Nick and Norah’s Infinite Playlist, and Paper Towns.

Ahhh, the bittersweet kiss of disappointment. I really wanted to like this one more than I did. I read My Life Next Door years ago, and LOVED it. I'm not a cotemporary fan, but this book was one of my favorite books ever - contemporary or otherwise. I just read What I Thought Was True last week, despite owning the book for a while. While I didn't love it as much as I loved My Life Next Door, I thought it was great! Huntley's first two novels were awesome. Five stars to the first one, four stars to the second one... three stars to the third one (The Boy Most Likely To). I can't believe I waited this  long, only to be disappointed!

Tim has been kicked out of high school, kicked out of his parents' house, and kicked out of his AA buddy's place, which he hadn't even started to live in yet. Tim's best friend Jase Garrett has Tim live in the Garrett's garage apartment. Alice, Jase's older sister, has been wanting to move into that garage apartment for a long time. With eight kids, the Garretts are quite a large family. Alice is nineteen, the second oldest, should be in college. Instead, she's taking of five of her younger siblings (with Jase, who is a year younger than Alice), while their mom is pregnant with Garrett #9 and their dad is in the hospital after a car accident. The last thing Alice needs is Tim taking the garage apartment. The last thing Tim needs is an unexpected surprise from someone he barely knows. Tim and Alice have way too much going on to be dabbling in a relationship - but maybe that is exactly what they need.

I'm not sure if I was a fan of Tim in My Life Next Door, but remember thinking that he was a crazy kid who needed to get his life together. This book takes that statement to a whole different level. Tim's life is insane. His school kicked him out, his dad kicked him out, and now there is someone new in his life. Not to mention he's kicked alcohol, cigarettes, and drugs OUT of his life. Tim has got it all going on, but I like him. He turns everything into a joke, but he's actually pretty serious, straight-thinking, and smart.

Alice is a control freak. She is always trying to keep Harry, George, Duff, Patsy, and Andy in line. Joel, the oldest Garrett kid, is on his own, living his life. Alice is the second, Jase is the third. Jase is going to college, but Alice had to defer, with the new Garrett baby and their father's injuries. Alice is a second mother, and a control freak. She likes being the dominate one in relationships, and is a bit of a heartless b****. Except around Tim.

The romance is not like that of My Life Next Door or What I Thought Was True at all. While I personally found this to be disappointing, someone else might be pleased. There is little physical interactions between Alice and Tim for about 60% of the book.

The conflict of the book pops in pretty quickly, and it seems a bit... I don't know, weird? I realize this could be an Alyssa thing, but I wasn't sure how I felt about the big curveball of the rising action. A friend of mine said it seemed "convenient", and I agree. It seemed like an easy way to draw this plot, an obvious way. But still, it was definitely fascinating. This plot dominates the story.

Overall, I liked the book - I just did not love it, and felt disappointed by it. After waiting so long, perhaps my expectations were too high. Or something.

Like I said above, I didn't really enjoy the big curveball of the rising action. There is a statement that Tim makes that foreshadows this Big Thing, but it seems weird to me. I had mixed feelings as I was reading, and I didn't seem to enjoy the story after The Big Thing was revealed (which is about 30% or so into the book? I'm bad at estimating. It seemed fairly early). The story kind of went downhill from there, for me. This isn't a fluffy contemporary romance novel - one could have figured that out, with Tim being an actively recovering alcoholic and substance abuser. But there is something else going on, and it's... weird.

And the fact that Tim didn't do this one thing to begin with, after finding out about The Big Thing? Hint: he should have questioned the accuracy of what he was told from the start. It doesn't make you a dickhead - it makes you smart. Duh.

The romance - this is not like Jase and Sam. This book is driven by something that is not related to Alice at all. The romance felt nonexistent, in my opinion. Either Huntley didn't do the best job of fleshing out the romance, or she did, and it's supposed to be a bit not-there and subtle and whatnot. Insta-love-y, in my opinion. Did Tim already like Alice from My Life Next Door? I can't remember. But their romance started off insta-love-y, and then there were a ton of speed-bumps and obstacles, and then finally at the end, there is a resolution. The romance was not enjoyable.

This is going to make me seem judgmental - but I've seen many people say that they would LOVE to be a Garrett, for the Garrett's to adopt them. Personally, I would hate that. Eight kids, ninth on the way, no money, not even to feed the children? I personally would not even bring ONE child into the world if I couldn't somehow provide. But nine?! And your oldest is twenty-two?! My paternal grandmother did this, guys. Ten children - nine boys, one girl. My dad is the youngest. He and several of the other younger children were raised by the oldest children. It was in a third-world country with things like dirt floors and no running water or electricity. The Garretts are in the USA with all of these great things that they can't pay for and are STILL making more children. I don't know, seems like a bad idea to me. Especially since we get to see things from the second oldest's POV - Alice - and remember, Joel is the twenty-two, the oldest and no longer lives at home. It's so unfair to Alice that she has to take care of her siblings! She does it out of love and blah blah blah but it's still very, very unfair.

Anyway. To each their own. Big families are fun, according to my dad (and my mom, who had seven siblings). But I have two older siblings and they are two enough. Not for me! Again, I realize this is a personal thing. But coming from large families? Taught me a few things.

This might be an Advanced Reader Copy thing, but distinguishing between Alice and Tim's POV was so annoying! There were no asterisks or names in bold at the beginning of a new POV, nothing to indicate a switch. Maybe this will be fixed in the final copy.

Anyway... there were some other things I didn't really like about this book, but I'll step aside for now.

This is a hard book to recommend/not recommend. On the one hand, I really enjoy Huntley's contemporary books, and would technically recommend any of them. On the other hand, this is easily Huntley's weakest. And yet it took the longest to appear. Definitely read My Life Next Door, but you could stop there. I know there are many Huntley readers that are very devoted, like me, and will read this one no matter what and/or will buy it no matter what. More power to you! I would do the same, had I not read it early.

3 stars. It's with a heavy heart that I give this book less than four stars. I mean, it could have been two-star or one-star bad though. Three stars isn't terrible. It isn't that great, either. I liked this book, but I expected so much better, and ended up being disappointed.

I didn't enjoy this book as much as I'd hoped, but I still liked it! This giveaway is for The Boy Most Likely To, and What I Thought Was True. Courtesy of the publisher. USA only, please!