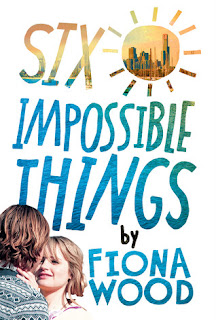 Fourteen year old nerd-boy Dan Cereill is not quite coping with a reversal of family fortune, moving house, new school hell, a mother with a failing wedding cake business, a just-out gay dad, and an impossible crush on Estelle, the girl next door. His life is a mess, but for now he's narrowed it down to just six impossible things...

This book is cute, very much lower YA literature. Oh, what it is to be fourteen again! That was six years ago, for me. How time flies. This book is all about fourteen-year-old Dan, and basically how life took a dump on him and his mother in a very short span of time.

Dan's father springs it on Dan's mother that the company is bankrupt and their home and assets are to be liquidated. Oh, and he tells them that he's gay, and he and the mother are no longer together. Great-Aunt Adelaide died, conveniently leaving Dan's mother a house, but not a house to keep. It's a historic house, and it's a bit of a dump, honestly. So they move, and Dan has to start in a new school system. Dan and his mother are totally broke, and can't even afford utilities in the house. Everything is a disaster for this boy, and he has to learn how to be much older than fourteen. Dan gets a job, changes his lifestyle, his look, and falls in love...

This is a coming-of-age novel, and it seems like it's meant for younger audiences in YA. Dan is fourteen, and he certainly thinks like a fourteen-year-old. Still, I think I liked him. He's totally awkward and weird, nerdy and painfully shy. I don't think I was anything like this at fourteen, but I definitely think Dan is an authentic adolescent character. And certainly fun to follow!

The story itself is ridiculous and a bit exaggerated? But also fun to read. So much craziness and shenanigans go on in this book. While the tone is lighthearted, there is also melancholy and sad. Life is hard in the Cereill home. There is a lot of struggling and hate towards the father and frustration with each other. But I like these negative emotions, and how well Wood writes this situation.

There is romance - Dan is basically obsessed with Estelle, the girl from next door. Estelle thinks Dan is a bit weird (which is true), and so it isn't mutual at all, at first. Dan makes a fool of himself in school and outside of school no matter what he does, but he never really stops trying to indirectly win Estelle. The romance isn't one of my favorite, but it was sweet, in an adolescent way.

Overall, I think I liked the story, but it definitely wasn't one for me. This is definitely a case of it's-not-you-it's-me. Contemporary doesn't always work for me.

I'm not a huge fan of lower YA, I'll just say that right now. It's not my thing! I can't dislike this book because it's lower YA, that's not fair, but I'm saying that if lower YA is something that you enjoy, then you'll already have a better chance at liking this novel, than I did.

I really didn't like how Dan was so obsessed with Estelle. It was creepy, and weird, and didn't come off as romantic or nice at all. I would have been very angry and very hurt if someone did some of the things Dan did to Estelle, to me. In general though, Dan is literally obsessed with Estelle, and no part of that is okay, in my opinion.

I didn't like how overblown and exaggerated things seemed. Maybe the author wrote this book years and years ago, because no one in high school acts like they way they do in this book? No one immediately starts calling someone a dickhead, in public, in front of everyone, especially not a new kid. No one takes a Sharpie and writes all over the new kid's face. This is like Mean Girls but for boys, and it is so exaggerated and infuriating.

Also infuriating - how much illegal and/or trouble-making activity goes on, and how Dan keeps letting it happen or not tell adults. You're fourteen, not twenty! Dan is a pushover and lets people walk over him all the time.

Which kind of ties into the romance - read this next part at your own risk - I kind of wish Dan would say no to Estelle more. She totally uses him at several points in the book! Totally not okay! And he keeps saying yes, because omg-she-is-paying-attention-to-me. Gee, I wonder why...

And then when everyone was blaming Dan for something completely out of his control... honestly, everything in this book was way too exaggerated for my tastes. Contemporary novels often aren't my thing, but this one was a different kind of contemporary that I didn't really enjoy.

To be honest, the story was a bit on the boring side...I like when everything is pulled together at the end, but most of the story is focused on Estelle and Dan's obsession with her, which I wasn't really digging. So I found the story a wee bit boring, unfortunately.

I personally didn't love this one, but it's probably a "me" thing, like I said above. Or maybe it just wasn't that great. It looks like it's a popular book, so I'd say it was just me. Contemporaries are hardly agreeable with me! Still, I'm glad I gave this one a shot. I won't be reading the companion sequel, Wildlife - especially from the sneak peek I saw in the back on this book! What is happening?!

2.5 stars -> rounded down to 2 stars. I wish I had liked this one! I tried though. The voice is very unique, the protagonist very original and likable, but the story wasn't that interesting to me, and there were a bunch of little things that bothered me!

USA residents: enter to win a copy!
Posted by Alyssa at 12:00 AM