Review: The House of Shattered Wings by Aliette de Bodard 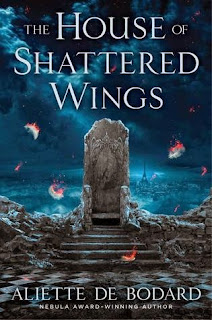 Multi-award winning author Aliette de Bodard, brings her story of the War in Heaven to Paris, igniting the City of Light in a fantasy of divine power and deep conspiracy…

In the late Twentieth Century, the streets of Paris are lined with haunted ruins. The Great Magicians’ War left a trail of devastation in its wake. The Grand Magasins have been reduced to piles of debris, Notre-Dame is a burnt-out shell, and the Seine has turned black with ashes and rubble and the remnants of the spells that tore the city apart. But those that survived still retain their irrepressible appetite for novelty and distraction, and The Great Houses still vie for dominion over France’s once grand capital.

Once the most powerful and formidable, House Silverspires now lies in disarray. Its magic is ailing; its founder, Morningstar, has been missing for decades; and now something from the shadows stalks its people inside their very own walls.

Within the House, three very different people must come together: a naive but powerful Fallen angel; an alchemist with a self-destructive addiction; and a resentful young man wielding spells of unknown origin. They may be Silverspires’ salvation—or the architects of its last, irreversible fall. And if Silverspires falls, so may the city itself.

This story follows many people, in third person. Philippe, who is a powerful immortal, but not a Fallen. Isabelle, who is a Fallen inextricably tied to Philippe. Selene, the Head of the Silverspires House, which used to be run by Morningstar (think Lucifer). Madeleine, the alchemist of the Silverspires House, formerly of the Hawthorn House, and totally addicted to angel essence. When Isabelle and Philippe are taken by Selene to the House, Philippe is trapped, but Isabelle is at home. There is darkness looming, an evil that not even Selene knows of. These characters will join and fight to save the Silverspires, willing or not.

This book was confusing - I don't even know how to comment on the story. The plot was interesting, but a bit boring. There was a lot of history dumped at times, and a lot of descriptiveness, which wasn't entirely necessary, in my opinion. So, with all of that in mind, the story seemed to go at a snail's pace. And when things happened, they happened too quickly and I wasn't sure what had transpired. Still, the story was very unique, nothing like anything I've read.

There was a lot going on, despite the plot moving slowly. Philippe has something going on inside of him, something that is evil and is seeking vengeance. He doesn't trust House Silverspires, nor do they trust him. Isabelle and him are linked in a strange way, and he trusts her, despite their rough start. Selene is a hard, cold woman, trying to lead House Silverspires as she has been since Morningstar disappeared. But someone is killing her informants, and it might be the other Houses.

There are a lot of characters, yet I feel like only a few were fleshed out. Philippe for sure, it was easy to connect with him, even if we were in the dark about what was going on with him for the entire book. Madeleine too - she's basically a drug addict, needing forbidden angel essence more than she needs food or water. These characters are developed from the beginning.

Read on for things I wasn't sure about, things I may not have liked.

I apologize if this review seems disjointed or all over the place. I don't even know if I liked this book or disliked it. I felt bored as I was reading, unfortunately. I struggled to get past 20%. 40%. 50%. 67%. I remember being at these locations and thinking, how have I not read more? This book is not THAT long, but it sure felt long. And boring, unfortunately. Perhaps this is an Alyssa problem, but I don't bore easily, especially with fantasy.

The story moved incredibly slowly, and we were left in the dark about so many things for so long, which really did not help. So it dragged. And I was tired. And that did not make for a good combination, and this book didn't do me any favors. Also this book was dense. Get to that in a minute.

There was so much information thrown around in this book at random times, like bursts of history, world-building, character information. It was a bit annoying, all the info-dump. That and it really took away from the story. All of the long descriptive scenes didn't benefit me personally.

I am so confused! In general, I'm just confused about this book. What happened, what will happened, did X person actually die, is Y person alive or dead? What was the tree? Where did Nightingale go? Is everything resolved? I'm not sure of anything, and I wasn't sure of anything since the beginning of the book. Me being confused was easily the worst prt of my experience with this book. Sadness!

Tl; dr - if I allowed myself to not finish book ("DNF"), this would be one. Despite the "positive" rating, this experience wasn't the best.

Nahh, I feel like there are so many better books than this one. If you had your heart set on reading it, then read it, go for it! But I don't recommend this book, especially if you hadn't heard of it before. Just read something else, this one isn't worth your time. The cover is gorgeous though. Dense, confusing adult book = no bueno.

2.5 stars -> rounded up to 3 stars. But really, 2.5 stars. I don't regret reading this one - I had been so excited to read it! But I wish I had liked it more. I wish I had understand what was going on. Because I still don't. And I really don't want to put myself through the bit of torture that was struggling to read/finish this one.