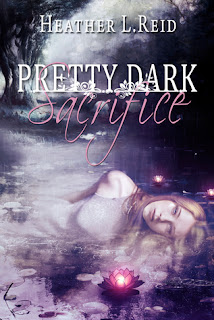 It’s been five weeks, two days, and eight hours since the demons forced Quinn to throw herself into the raging river, since Aaron sacrificed himself to save her, since his body disappeared without a trace.

Everyone wants Quinn to move on, but she can’t, not after a spirit appears to her at Aaron's memorial, convincing her he’s still alive.

When a mysterious box materializes on the very spot Aaron disappeared, Quinn finds she’s at the center of an ancient prophesy of betrayal, revenge, and sacrifice that takes her to the depths of the underworld to face Lilith—Adam’s first wife.

If Quinn can stop Lilith from unleashing the demon horde Eve, trapped inside the box during the Battle of Eden millennia ago, she will save the human realm and free Aaron from an eternity in torment.

All it will cost is her blood.

It has been over two years since Pretty Dark Nothing was published! That book was one of my favorite books of 2013. It was very unique ad original and fresh, and I loved it from start to finish. I remember rereading it a few times, and so the book is still one that I remember pretty well. Nevertheless, while I didn't love this sequel like I did Pretty Dark Nothing, I certainly enjoyed it! My rating is more like 3.5 stars, but not quite 4 stars.

It's been over a month since Aaron sacrificed himself in order for Quinn to live. He saved her from drowning in a river, but he himself died. The search for his body has been called off. Yet Quinn does not believe that he is dead. She is sure that he exists still. And he does, which she soon finds out. He is in the Underworld, held captive by Adam's first wife, Lilith. Also, Quinn has Eve's blood and flesh, and she is able to fight ad banish demons. Quinn will stop at nothing to get Aaron back, even if it means allowing Lilith to release an army of demons, effectively dooming humanity.

This book felt different from Pretty Dark Nothing. Less raw, less emotional. In the first book, Quinn was all over the place, and her character was a bit shaky. By the end, she changed greatly, and became a strong and deadly girl. In this book, Quinn is desperate to find Aaron, with or without the help of her friends or her Sentinel, Azrael. Quinn's desperation makes her impulsive, but also very, very powerful. I am very pleased with Quinn's character development in this book.

The story is wrapped around Quinn's search for Aaron. No one believes her when she says that she knows he is out there. Everyone looks at her with hatred, because he is the one that died saving her. Even Quinn's best friend Reese hasn't been speaking to Quinn. But Quinn's friends don't abandon her, and Reese, Marcus, and Caleb (a new guy friend of Quinn's) band together to help her and support her. I love Marcus - he is a tease and a flirt, and a great other half of Reese. Caleb is calmer and more of a low-key flirt, but he knows that Quinn's heart is elsewhere.

We do get bursts of scenes with Aaron's point-of-view. Aaron is in the Underworld, captured by Lilith, who is trying to find a box that contains her demon army (they are trapped, kind of like Pandora's box). Lilith tortures Aaron in the worst of ways, and Aaron learns strange things about himself that he didn't know. Things start to click and make sense, but Aaron is still trapped. I really like Aaron - his situation is hopeless, yet he never gives up. He is a go-with-the-flow guy, but he is also an impulsive, angry guy when he's provoked. I like Aaron a lot!

There is romance in this novel, and series in general. This book is told in third person, switching between Aaron and Quinn (though more Quinn than Aaron, by far). Though Aaron is held captive in the Underworld, he and Quinn do communicate in this book, in an inventive way. And when they see each other solidly, sparks fly like in book one. Readers will be very satisfied with the romance of this novel - no insta-love, no love triangle.

Overall, I really enjoyed this sequel. There will definitely be a third book, given the way this one ended. This book was engrossing and engaging, and functioned well as a sequel novel. The third book looks like it will be the epic showdown, and I cannot wait!

This book didn't have the same feel as Pretty Dark Nothing. One of the things that I absolutely loved about book one was the rawness, Quinn's drama, the difficulty of all that she was dealing with. This book has significantly less baggage. I guess some people might like this though! I just wish it were the opposite, because the rawness of emotion and pain was one of the things that really drew me in,

But still this novel was dark and full of guilt and shame and pain, so I really can't complain all that much!

Given the uniqueness of this series, I would definitely recommend this book and its predecessor! Not only is the series unique, but entertaining and quite dark, too. Borderline creepy and scary, though I scare easily. The romance is very satisfying The female protagonist is one of those characters that seems like she might be weak, but proves her strength over and over. Such a great novel!

3.5 stars -> rounded up o 4 stars. I read this one pretty quickly, which is great, because it shows that the book wasn't boring. I am quite excited to read the third (and hopefully final) novel! I say "hopefully" because I hate waiting for series to be completed! Gimmee the next book now!