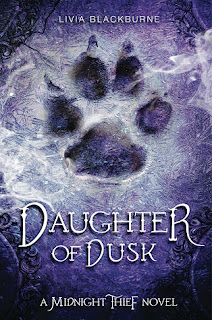 After learning the truth about her bloodlines, Kyra can’t help but feel like a monster.

Though she’s formed a tentative alliance with the Palace, Kyra must keep her identity a secret or risk being hunted like the rest of her Demon Rider kin. Tristam and the imprisoned assassin James are among the few who know about her heritage, but when Tristam reveals a heartbreaking secret of his own, Kyra’s not sure she can trust him. And with James’s fate in the hands of the palace, Kyra fears that he will give her away to save himself.

As tensions rise within Forge's Council, and vicious Demon Rider attacks continue in surrounding villages, Kyra knows she must do something to save her city. But she walks a dangerous line between opposing armies: will she be able to use her link to the Demon Riders for good, or will her Makvani blood prove to be deadly?

In this spellbinding sequel to Midnight Thief, Kyra and Tristam face their biggest battle yet as they grapple with changing allegiances, shocking deceit, and vengeful opponents.

Despite my immense love for Midnight Thief and my overwhelming excitement for this book, I didn't love it. I actually beta-read Daughter of Dusk last year (my most heartfelt thanks to the author), and I did not quite enjoy the book then. I can see some changes made from the draft I read to now, but I'm still not convinced that I enjoyed the book.

In this sequel novel to Midnight Thief, Kyra must learn to be both Makvani and human to save herself and the ones she loves in Forge. Forge's Council is slowly being taken over by Willem, and the Makvani are shying away from helping Kyra or the Council. Kyra is hiding who she is - but how long will that last before Willem and the Forge find out? Kyra will need to make alliances and outsmart Willem before Forge is lost.

There are a fair amount of twists and turns in this book, that definitely keep the story interesting. The overall story of the series is very important and ever-present, as the Council is moving in on the Makvani, and the Council is slowly being taken over by Willem, who has his own agenda. There was also the book's plot and subplots, dealing with Idalee (a young girl Kyra considers her adopted sister), Kyra's struggle with her Makvani side, and her feelings for Tristam.

While I mostly liked the story, there were definitely cliche parts, and boring parts. Read more on that in the next section. For the most part, the story held my attention. There were some changes made to the story from what I beta-read. I think the changes were necessary and an improvement, though I still (obviously) didn't love this book.

The author cleans up the romance in some areas, and complicates it in others. There is no love triangle between Kyra, James, and Tristam. I personally never thought there was one, but there definitely isn't one in this book. But then Tristam has familial duty, and Kyra knows he isn't comfortable with her Makvani blood... so there's that. The romance isn't really in this book, which bothered me. There is no chemistry between these two characters. But still, at least it's a pair, and not a triangle.

The ending is a good one, not perfect, but not sad or terrible either. There are a good amount of deaths, but also a good amount of surviving couples and positive changes. Some things didn't change, and I like that the author kept some things a certain way - it felt very authentic that way. Overall, I think this book was okay, but not great, especially for a series conclusion.

I'm not even sure how to explain why I didn't like this one. I think it was a case of me being weird... but I can't say that this is all on me. For one, it seems obvious that the author hasn't written more than one or two novels. Her writing style isn't really that great. There are so many anachronistic or slang phrases and words that just don't fit the style of language and speech in this series. The author uses a specific speech most of the times, but inserts modern phrases at other times. This felt very off. Seriously, shouldn't editors screen for these things?

Also, the author's writing style seems very juvenile - almost like this book is Middle Grade. Is it? I thought this was Young Adult. The author doesn't have a lush, flowing writing style. Everything is rather TELL, and not SHOW. Matter-of-fact, conversational, instead of descriptive, or something. Every person's writing style is different, but Blackburne's isn't very... author-y. I'm trying to put this in words and failing majorly. I'm not trying to take shots at the author, but I'm trying to accurately convey how I felt about her writing style - it just isn't that great.

The story seems rather cliche and predictable. While Midnight Thief blew me away, this one seemed to be full of cliches. OF COURSE Flick and ______ would form a relationship, basically on sight. Of course Tristam's familial duty would come up RIGHT NOW. Of course Willem would do this, Malikel would figure out this, Leyus is this. Cliche, cliche, cliche. So many cliches.

I can't say I'm a huge fan of the romance in this book, though I'm glad it wasn't worse. There is NO ROMANCE, and I personally don't find this to be a good thing, given that Kyra and Tristam moon over each other fairly often. There is no chemistry! No rhyme or reason for them to want to be together! They would make good friends or partners or solders-in-arms, but lovers? Naaahhh. They have zero chemistry, physical or otherwise.

There were times when I wondered where the story was going or what the significance of this or that was. Some things just didn't seem to have a point. The story, as a whole, is interesting, and I was in no danger of not finishing, but the construction of the plot wasn't great. And keep in mind, I said this was an improvement from what I beta-read. That statement still stands.

Overall, I'm disappointed in some ways, ESPECIALLY since I beta-read this novel, and had issues with a lot of the things I mentioned above. The author changed some things, but most things stayed the same. When I beta-read this book last year, I told the author what I didn't like (I was very honest), and while I understand why the author wouldn't want to change things, it's too bad, because my sour opinion still stands.

No. Sorry, but no. If you haven't read Midnight Thief, don't worry about it. There are plenty of high fantasy novels publishing in 2015 and 2016 that are REALLY GOOD. This series is meh, okay at best. This conclusion should have been so much more epic and so much less bleh. But I walked away with a feeling of "oh well" and "meh" and "whatever". Not exactly encouraging.

2.5 stars -> rounded up to 3 stars. I'm disappointed, because Midnight Thief was one of my favorite novels of 2014. Yes, three stars is still positive. But I was really hoping that, since I beta-read the book (and didn't like it), that when I read it the second time, I would at least like it more? Not so much, unfortunately. Still, it was an okay novel!