Blog Tour Review and Giveaway: Bind Me Before You Go by Harper Kincaid 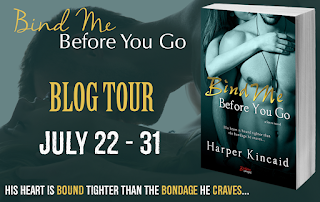 Welcome to the blog tour for Bind Me Before You Go by Harper Kincaid! Excited about this new Brazen novel? Me too! It's now a published novel, so get a copy as soon as possible! Check out my review if you need some convincing :D 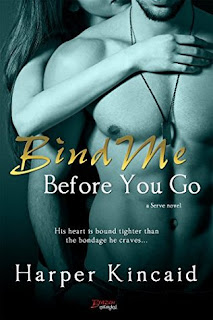 His heart is bound tighter than the bondage he craves...

Security expert David Cavill has more secrets than any man should. Secrets that forever shut down any possibility of love, marriage, or family. Yet Cassidy draws him in, an intoxicating combination of strength, candor, and sensuality that David can't resist. But as their bond deepens, Cassidy must decide if she can love a man whose heart is bound tighter than the form of bondage he craves...

This book is so short! Yet we get a lot of detail and background about Cassidy, and David. Both of them have issues, and both of them are hardworking, passionate individuals. Cassidy grew up in a difficult place, and David has a home life that isn't easy. The two of them are a great pair, and not just sexually. They have plenty of chemistry together, but they also connect emotionally.

I love the subplot with Cassidy's roommate Allison and David's friend Leo! Leo is an instructor at Serve, and he and David have worked together at Serve together, and are friends. Leo and Allison meet and the attraction is instant. I like the pair of them!

The relationship is developed super quickly, which bothered me, but meh, they fell for each other hard. But I feel like this book could have benefited from another fifty pages. More on this below!

The chemistry was steamy, the tension fairly thick. I thought this book would be a little hotter, given that it's a BDSM-based book, but that's okay. Overall, I was pleased with this one!

3.5 stars -> rounded down to 3 stars. I'm glad I had a chance to read this one! I can't believe I'm saying this but I wish it were a little more kinky. If you know what I mean. I love the steamy romance and the story was pretty interesting! I'll definitely be looking for more of Kincaid's books in the future. 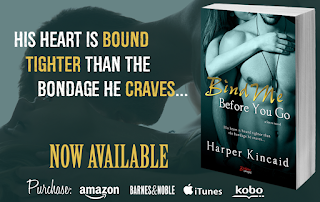 A woman with the heart of a revolutionary,
The mind of a pragmatist,
And the inappropriate humor of your tipsy BFF...

Born in California and raised in South Florida, I've moved around like a gypsy with a bounty on my head ever since. Along the way, I've worked as a community organizer, a professional matchmaker, an art teacher, a popular blogger, and a crisis counselor (to name a few). All the while, longing to have the guts and follow-through to do what I really wanted: to write and become a published author. That wish has finally come true and I am tickled pink with glitter over this good piece of fortune.

What else? Hmm...I love indie, lo-fi, complaint rock played on vinyl, wearing black because it's slimming, the theater, well-informed optimism, happy endings (both kinds),and making those close to me laugh 'til they snort. I'm a self-admitted change junkie, loving new experiences and places, but have now happily settled in the cutest lil' town, Vienna, Virginia. I totally love hearing from readers so stalk me via social media or email me at HarperKincaid26@gmail.com!