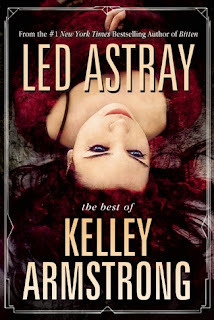 Two brand new tales anchor this wide-ranging collection from one of urban fantasy's most successful authors. Here is the first time that best-selling fantasy, YA, and crime author Kelley Armstrong has had her stories collected from Otherworld and beyond. With her signature twists and turns, Armstrong gives a fresh spin on city-dwelling vampires, werewolves, and zombies, while also traveling further afield, to a post-apocalyptic fortress, a superstitious village, a supernatural brothel, and even to feudal Japan.

With tales that range from humorous to heart-stopping, these are the stories that showcase Kelley Armstrong at her versatile best.

I don't think I've ever reviewed an anthology! I've certainly read a few, but not reviewed one (that I remember). I don't read anthologies often - the stories inside are too short for my taste, and I never feel satisfied. With this anthology, I was really only interested in the Age of Legends story, The Kitsune’s Nine Tales. While that one was probably my favorite of all of the short stories, I enjoyed this anthology as a whole.

There are so many stories in this anthology, and I won't bother summarizes each one, or even commenting on each one. We'd be here all day! I'll highlight some of my favorites - The Kitsune’s Nine Tales, The Door, and Devil May Care.

The Kitsune’s Nine Tales is the only story I really wanted to read in this anthology, when I first heard that this anthology would be a thing! I've read Armstrong's Darkest Powers series, and the Age of Legends series. I wasn't a huge fan of the Darkest Powers series, but I LOVE the Age of Legends series. The rest of Armstrong's books are unfamiliar to me, though I know how popular her books are (as well as she herself!).

The Kitsune’s Nine Tales is the story of Alvar Kitsune and how he escaped death in the Forest. This story is very short, yet very dense. There are short cameos from Gavril, his son, but call that this story takes place over ten years ago, so Gavril is but a boy. This story seems like it is going in one direction, regardless of whether or not you've read the Age of Legends books, but Armstrong finds ways to surprise a reader. This story was certainly interesting, and a bit surprising!

The Door is the next story that I really liked. It is an original short story, not related to any of Armstrong's published novels. It is the story of a young girl whose father brings her books and toys, and when her sisters are born, brings them books and toys. The girl is not supposed to go near a certain door. When her father dies, and then her mother, the girl opens the door. She must make a decision, if she wants to keep opening it, or not. This story sounds really simplistic, with little conflict, but the story itself is so intriguing! What's beyond the door? What didn't her parents want her to see? What do their deaths have to do with the door? This was a strange short story, and I'm not entirely sure I understand it, but that is the beauty of short stories!

The last short story I want to highlight is Devil May Care. This story is a background sort of story relating to the Cainsville series. I've not read this series. This story is about how Gabriel's father and mother met, how Gabriel came to be. It is a strange story, because the Patrick and Seanna do not know each other until one they meet. Their interactions are very strange. Gabriel is conceived, but the parents do not want anything to do with each other. Nevertheless, I am very intrigued. The world of Cainsville seems to be one of fae, foretelling, fulfillment. This story was brilliant for several reasons, but importantly so because I am hooked and want to read the Cainsville series now!

Overall, the stories in this anthology were engaging, entertaining, interesting, and definitely helpful if you've read the full-length novels of the series that the short story corresponds to. And the short stories that stand alone are mesmerizing and strange, definitely worth reading! All of the stories are rather short, which I (for the most part) enjoyed!

I don't know if there was anything specific I didn't like? It's possible that I might have enjoyed some short stories more, had I read the full-length novels associated. But that's my problem, not the author's, and it's not a negative towards the book! Just a note, in case you're in the same boat as me!

If you're a Kelley Armstrong fan, or even if you've only read one or two books by her, check out this anthology! I'm not usually one for anthologies, but this one was quite interesting, and very easy to read, as the stories were short and engaging. Armstrong is a talented urban fantasy writer, that is proven over and over!

4 stars. One of the few anthologies I've read, and I've enjoyed it! Might I recommend the Age of Legends series to everyone? High fantasy YA, simply amazing! The short story in this anthology for that series is very eye-opening! Definitely check out some of Armstrong's books if you get the chance.