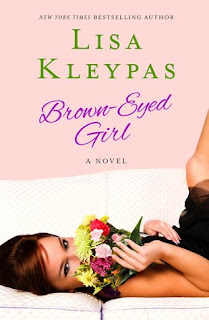 Avery Crosslin is a talented young fashion designer with a bright future ahead of her. But when the company goes into liquidation, Avery finds herself without a job and a boyfriend who decides to leave her.

When her father falls ill, Avery is by his side day and night. But one evening she notices a young man, Joe, in distress and offers to help. Their instant attraction to one another is magnetic but even though she is unexpectedly charmed by the good-looking stranger, Avery tells him that she has to leave. He asks for her name and number, but she lies and tells him she has a boyfriend. At this point in Avery's life, the last thing she wants or needs is more complications.

The next day, as Avery returns to the hospital to thank the nurses for taking such good care of her father at the end of his life, one of them gives her an envelope from Joe. It is addressed to "Brown-Eyed Girl."

Avery knows she wants to see Joe again but she faces a dilemma. When she learns that Joe is the man responsible for her father's death she is troubled.

Is there any hope of a future for them both?

My first Kleypas novel... was a bit of a flop. I guess two stars isn't bad? But I think I'm being generous. I didn't hate it, but I certainly didn't love it. Dislike is accurate. However, I'm quite pleased with myself that I gave it a shot. My lovely friend Racquel and numerous others have been pushing this author at me - and I will definitely keep trying! I think Kleypas's contemporary romance novels just aren't for me.

This is the fourth and final novel of the Travis Family series, featuring Joe Travis, the youngest brother (there are four children), and Avery, a wedding planner. Avery and Travis meet when Avery plans the wedding of a friend of the Travis's, and then Joe's sister-in-law asks Avery to plan a family member's baby shower (Joe's sister, Haven). Joe is interested and Avery, and wants to see her and spend time with her. But Avery has serious trust and commitment issues, and doesn't want to get attached. So naturally, she pushes him away. Is persistence on Joe's part enough for the couple?

I've not read any of the other books in this series (remember, I haven't read a single Kleypas novel, until this one!), so learning all about the Travis family was new for me. I must say, the family is one of the best parts of this novel. The four siblings - Gage, Jack, Joe, and Haven - are very close, as are their respective spouses. Everyone is married except Joe, and they all have kids (Haven's first is on the way). I love the family aspect of this book! It's great to see rich-kid siblings so close.

Joe would be my favorite part of this novel. Do men like him really exist? He is the sweetest, kindest, most attentive, sexiest, hottiest combination of all things hotness that a woman would ever want. I mean, when we first meet him, he's the perfect Texan gentleman. And when he and Avery first do the deed, he's this perfect sex god. And when she pushes him away, he's the perfect gentleman, yet he never gives up. He's not annoying, he's persistent, and he's sweet. Gosh! I want a Joe!

I kept reading, because I wanted to know what was happening. The story wasn't that great, but I was in no danger of not finishing. The steamy scenes aren't all that steamy, but Kleypas does a good job of writing them. There's little foreplay and explicitness, if that makes sense. Good thing, bad thing, depends on your preferences!

I liked the secondary romance in this book - Avery's half-sister, Sofia, ends up finding love too. THAT relationship is hilarious. Sofia and her guy are dynamite together!

I did NOT like Avery. From the start, I knew I would have issues with her. She's got serious trust issues. Her fiance left her at the altar on her wedding day, and her father left her mother and had a slew of other children with different mothers (Sofia is one). So Avery is afraid of men and commitment and getting her heart broken.


I know, I know. This issue exists in real life and is an actual thing and Avery is a person with plausible, authentic issues. Got it. That doesn't mean I have to like her, or her issues. That doesn't mean I have to like how she treats Joe - like s***, might I add. That boy is literally the SWEETEST man on Earth and she treats him like garbage because SHE has issues. I wish he were more of an a**hole - that's what she would have deserved honestly. Honey, you can have issues. But why in the world is it okay to treat someone else like crap because of your issues? Not okay!

She runs from him, ignores his texts, shuts him down, turns down the simplest invitations, is flat-out rude to him, especially when his family is around. She ignores him and his feelings, but when he is "giving her space", she gets PISSED. Well excuse the f*** out of me, ma'am. Who gave you the right to be so hypocritical?! SHE tries to tell him that one certain thing he does is sexist (it isn't), but personally, I think she is being the sexist one.

Joe gives her TOO MANY CHANCES. I'm sure, in his head, he thinks she is worth it. Sure. Cool. But I would never give someone so many chances. Especially if you just met her/him. Hello, insta-love. I can't even say insta-lust because Joe seemed to have fallen for her on the spot. He wanted to start a relationship right then and there, I think. Super nice guy, totally deserves so much better than Avery. Avery, who does not like people telling her that she dresses badly for her figure (that is NEVER an insult, if someone is telling that you're dressing like a bag lady, hiding a gorgeous figure). Avery, who is selfish beyond words. Avery, who wants Joe to go away, yet don't go away because as soon as he does, she's going to yell at him, yet give everything up for her, because SHE is the most important thing in the world. Get over yourself, lady.

The climax/big issue of the book REALLY bothered me. I don't want to spoil anything for anyone, but basically, what Avery basically asks/begs Joe to do is insane. So selfish. I can't believe she asked him that. Instead of talking about it, she straight-up went in for the kill and ask. No, she was kind of telling him. Excuse me? Who made you Queen Elizabeth of England?

Ugh! I don't like Avery. I'm not trying to shame the female protagonist or anything. I recognize that all the issues I had with Avery are real. And I realize that it could very well be just me with these issues. However, I didn't her. And it seriously impacted my thoughts on the book. And I'm articulating my feelings on the book so... Avery is why I didn't like this book. The end.

Again, I think Kleypas's contemporary romance aren't for me. It's an *Alyssa* thing, perhaps!

No. I'm sure there are better Kleypas books out there. But if all of her books are like this - with ridiculous female protagonist who act like they are overlords of the world and everyone should cater to their whims? Leading men by their d***s? Then I'm done. I'm sure other people will find Kleypas's novels very "feminist" and empowering, but as a feminist and a proud female, I can attest that I did NOT like this book (or its female protagonist), and I would not recommend it. If Avery were a person in real life, I would have already yelled at her plenty and set her straight. She would not be my friend, ever!

1.5 stars -> rounded up to 2 stars. Thank you to the publisher for the copy, and for all of the lovely people who recommended Kleypas's novels to me. I'm going to stay away from Kleypas's contemporary romances for a good long while, but I may try a historical romance of hers! I do love historical romances.