Review and Giveaway: What I Thought Was True by Huntley Fitzpatrick 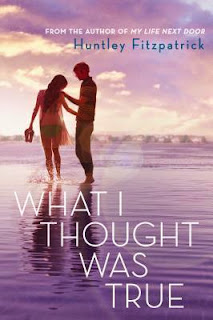 Gwen Castle has never so badly wanted to say good-bye to her island home till now: the summer her Biggest Mistake Ever, Cassidy Somers, takes a job there as the local yard boy. He's a rich kid from across the bridge in Stony Bay, and she hails from a family of fishermen and housecleaners who keep the island's summer people happy. Gwen worries a life of cleaning houses will be her fate too, but just when it looks like she'll never escape her past—or the island—Gwen's dad gives her some shocking advice. Sparks fly and secret histories unspool as Gwen spends a gorgeous, restless summer struggling to resolve what she thought was true—about the place she lives, the people she loves, and even herself—with what really is.

I bought this book months ago, just a little bit after it was published in April of 2014, and it took me THIS LONG to get to it. Review books get maximum priority over books I buy or borrow from the library, so a lot of times, I'll buy a book I've not read before, and it just sits there. Like this one. My Life Next Door is one of my favorite YA contemporaries, and while I don't think this is another *favorite* (it's a tough title to earn!), it is definitely a YA contemporary that I actually really enjoyed. I often have a tough time with YA contemporary.

Gwen wants to forget what happened last year, especially with Cassidy Somers, who was a mistake. She lives on an island with her mother, grandfather, little brother, and cousin. They are poor and work for the richer folk on the island. Gwen takes a job "babysitting" an older lady whose leg is injured. But she isn't the only one working - rich, privileged Cassidy Somers is now the yard boy of the island. Sparks fly and secrets unfold as Gwen's summer pans out to be not what she expected.

I loved and hated Gwen. She and I are very, very different, and while I respect her as a female and like her as a person, I will start by first saying that her decisions regarding boys are not decisions I like, would do, or approve of. If that makes sense. I don't want to spoil much, but I thought I'd add that note. Don't get me wrong! I like Gwen. But I wouldn't have made the choices she did.

Nevertheless, Gwen is a hard worker. I like her work ethic - she and I came from similar backgrounds, financially. Although, Gwen is a child of divorced parents, and has a brother who has a an unknown condition similar to autism. Gwen and her cousin Nico act like third and fourth parents for Emory, which isn't fair to them (he's not either of their child), but they sacrifice much for Emory selflessly. Gwen is constantly helping her mom, her father at his store, and takes on a job she doesn't want, babysitting old Mrs. Ellington.

I felt weird about Gwen, and didn't like her, in the beginning of the book. As well as when we discover why she is running from Cass. It's not revealed all at once, it takes a while, but after each revelation, I was a bit more disappointed in Gwen. And then we find out WHY she did what she did (which I suspected all along), and I was angry and disappointed, but then at least I understood. She is a teenage girl that I have seen over and over in college, so I think I understand her, even if I am not her.

I like Cass a lot. He is a sweet guy, and he is totally misjudged by Gwen. Gwen jumps to all kinds of conclusions (for no substantial reason, really), and she pushes him away. He isn't a "bad boy" or a player or flirtatious. He's charming, a gentleman, with wicked appeal. He is working as a yard boy despite being the son of a very rich family. He needs to improve his performance at his school, which is why he is working (doing hard work), why he is training for his swim team over the summer, and why he asks Gwen to tutor him in English over the summer.

The story is very flowy, like it meanders, in a very story-like way. It doesn't feel like there will be some catastrophic climax that will decide everything, though I did catch foreshadowing more than once (and was right about all of it - especially with Spence at the end!). I like the flow of the story - it's almost conversational, though it's told from Gwen's first-person POV.

Romance! The romance in this story is a difficult one. Gwen and Cass have history, and Gwen has serious trust issues, and doesn't see her flaws. She's blind and naive and wants Cass to want her but then gets mad when he wants her and he confused and I'm confused! She's way too complicated for me, way too much like many college girls, who over-analyze everything in terms of boys and turn everything into a problem. But then again, most boys lead girls to be like that. But then again again, Cass wasn't like that. It takes a while for Gwen to realize this. But I love seeing Gwen and Cass actually fall for each other. Their relationship is rocky but developed, and towards the end, very swoon-worthy!

Character development is so good in this novel! It's not just Gwen's story - it's Cass's story, and how he deals with accepting the consequences of his actions at his school. It's Nic and Vivian's story, as they explore their relationship, the good and the bad. It's Emory's story, as he learns to swim. It's Gwen's mother's story, who cleans houses around the clock every day and never seems to be angry or frustrated. This book has so many positive relationships (despite three very crappy ones from Gwen's past), and it has very developed and well-rounded characters!

Overall, I liked this book. I didn't like it at first, as I was reading, but I started to understand Gwen better, and I really got into the story. There is so much more than Gwen and Cass - Gwen's job, Nic and Vivian (who is Gwen's best friend, and also Nic's girlfriend), Emory learning to swim, Spence Channing becoming more... likable. I didn't like him at first, and I'm still wary of him, but he's okay. I totally saw the ending coming. It was odd, sad, but uplifting!

Like I said about Gwen - I didn't like her at first. It went in waves - sometimes I liked her, sometimes I didn't. Her choices would never be my choices, but I understand her. I don't think even she is proud of her choices, and I'm happy with her character development!

I would recommend this one! Despite not being one for YA contemporary, I really enjoyed this book. Huntley Fitzpatrick really knows how to dig deep into YA contemporary and write more than fluff or romance. There are so many issues at hand in this story, and she writes the story beautifully!

4 stars. I'm so glad I bought this one! Even though I didn't read it until about a year later. I'm getting ready to crack open my review copy of The Boy Most Likely To, so it's good timing!

Courtesy of the publisher. USA only!