Welcome to the release day blitz for Duke of Sin by Elizabeth Hoyt! I am a huge fan of the Maiden Lane series, and this latest novel stole my heart. Read more about this amazing HR novel! 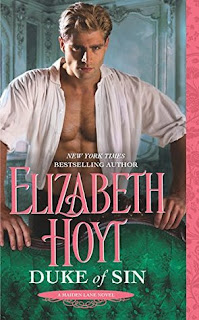 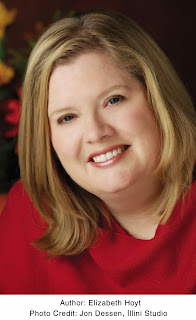 “I was told you had need of me, Your Grace,” she reminded him, folding her hands at her waist to hide the trembling that had begun again. She’d been in demand before this position. Duchesses and lionesses of society had wanted her.

“So practical,” he mused, tilting his golden head back to gaze, presumably, at the gaudy sky-blue velvet canopy of his bed. She’d always thought it rather vulgar, actually. “I suppose that would be considered a good thing in a housekeeper.”

“It’s generally considered so, Your Grace.”

“And yet, I find it somewhat…”—he raised his naked arm straight up above his head and twirled his hand as he thought—“irksome.”

“I am sorry, Your Grace,” Bridget said as pleasantly as she could, which, sadly, was not very.

“Oh, don’t be,” the duke murmured silkily. “One can’t help one’s nature, no matter how irritating it is to others.”

His azure eyes suddenly dropped to pin her, hard and merciless, and she lost her breath as she fell into his predator’s stare. It was like looking into the eyes of something inhuman, almost otherworldly. Her chest ached as she stared at him, the air still locked within her, but at the same time the place between her legs ached as well.

Then she inhaled, filling her lungs with sweet air, as he watched her still, his eyes half-lidded, and she felt an odd exhilaration, as if a gauntlet had been thrown down. As if they were adversaries, equal on the field.

Which was completely ridiculous.

Possibly she shouldn’t have indulged in that third cup of tea this morning.

“I wonder whom you work for, Mrs. Crumb?” he whispered.

“Why, for you, Your Grace,” she replied, holding his gaze.

She felt a bead of perspiration trail down her spine.

He strode, nude, to his desk, and, bending over it, afforded her a quite scandalous view of his muscular bottom. He seemed to have a dark mark of some kind on the left cheek. Good God, it looked like a tattoo. What—? “Why, Mrs. Crumb,” he drawled, and she snapped her gaze belatedly up to find that he’d turned back to her—damn it! “Were you ogling my arse?”
She opened her mouth and then wasn’t sure, exactly, what to say. Was he about to dismiss her or not? “I…I—”

“Ye-es?” He took one long stride toward her.

She was suddenly, overwhelmingly aware of what she’d until now successfully ignored: He. Was. Nude.

His shoulders were wide, his chest highlighted by pale-pink nipples drawn tight, with but a few curling golden hairs between. His torso narrowed in a perfect V to a slim waist and a shallow belly button. A thin line of slightly darker hair led to his genitals.

During his supposed absence Bridget had had plenty of time to study the life-size nude portrait of the duke hanging next to his bed. She’d long thought the dimensions of his manhood exaggerated.

She hastily glanced up to find him standing far too close to her, a wicked smile playing about his mouth.

“Oh, Mrs. Crumb, such a look,” he murmured, his voice a deep purr, his bare chest brushing against her snowy white apron. “Why, I don’t know whether to guard my bollocks…”—his gaze dropped to her mouth—“or to kiss you.”

(Click on each cover for more information!)
Posted by Alyssa at 12:00 AM