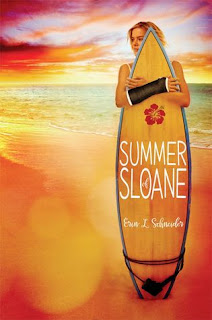 These are the things seventeen-year-old Sloane McIntyre pictured when she imagined the summer she’d be spending at her mom’s home in Hawaii with her twin brother, Penn. Instead, after learning an unthinkable secret about her boyfriend, Tyler, and best friend, Mick, all she has is a fractured hand and a completely shattered heart.

Once she arrives in Honolulu, though, Sloane hopes that Hawaii might just be the escape she needs. With beach bonfires, old friends, exotic food, and the wonders of a waterproof cast, there’s no reason Sloane shouldn’t enjoy her summer. And when she meets Finn McAllister, the handsome son of a hotel magnate who doesn’t always play by the rules, she knows he’s the perfect distraction from everything that’s so wrong back home.

But it turns out a measly ocean isn’t nearly enough to stop all the emails, texts, and voicemails from her ex-boyfriend and ex-best friend, desperate to explain away their betrayal. And as her casual connection with Finn grows deeper, Sloane’s carefree summer might not be as easy to find as she’d hoped. Weighing years of history with Mick and Tyler against their deception, and the delicate possibility of new love, Sloane must decide when to forgive, and when to live for herself.

I didn't have expectations when I decided to read this book. I wasn't sure what to expect, which is good - low expectations mean less disappointment. I'm not a fan of YA contemporary, especially the ones that might have drama. But I was pleasantly surprised when I found that I really enjoyed this book! It is in the running for top ten YA contemporary novels of 2016.

Sloane is going to head to Hawaii with her twin brother in the next day or so, to spend the summer with her mother and stepfather. But the day before she leaves, everything falls apart. Her best friend Mick tells her something, something that happened between Mick and Tyler (Sloane's boyfriend). So Sloane punches Tyler, breaks his nose in three places, and leaves for Hawaii with a black cast on her right hand. Hawaii is exactly what Sloane needs; a clean break (ha ha), friends that aren't friends with Mick or Tyler, different cuisine and culture... and a hot guy who is the son of a hotel magnate. The attraction to Finn pulls Sloane in. But her problems don't just disappear. Tyler won't stop calling and texting, and Mick texts and emails constantly. Even an ocean away, Sloane can't escape the problems that she left behind. But she knows one thing - she is not ready to forgive Tyler and Mick.

The beginning of this book broke my heart. I was soooo not expecting what Mick and Tyler did... well, obviously we can kind of figure out that they slept together, behind Sloane's back. This was heartbreaking, experiencing what Sloane felt. She was so anger and so hurt and so betrayed, and my heart broke for her. I would have shattered Tyler's nose as well! But also Mick's. There is a reason why Sloane didn't lay a hand on Mick.

Sloane hardens her heart and doesn't respond to any texts, calls, emails, or letters that Tyler and Mick send to her, when she leaves for Hawaii, while she's at Hawaii. Good for her! I love that Sloane stays strong and doesn't cave in to communicating with Tyler, or Mick. Yes, these are her (ex)-boyfriend and (ex)-best friend, but they deserve to be shut out by Sloane. I respect Sloane's decisions, and I felt just as scorned as she did! She's pretty much done with Tyler, after she leaves and goes to Hawaii. He has no shot. Mick though... Sloane misses her best friend. But she's done with Mick too, and eventually, Mick's texts start to turn really b****y, and Mick decides she's done with Sloane.

I really like Sloane. She's a swimmer, and she's pretty outgoing. She initiates her and Finn's first real conversation and interaction, and I thought it was hilarious (and embarrassing for her, at the end of that first interaction - so funny!). Sloane is not mopey or terribly sad; she misses her ex-boyfriend, her ex-best friend, but she's angry and over it, not pathetic and sad.

Finn is my favorite character! He's charming and slightly arrogant, but not in the cliche YA boy way. He's very tall and very athletic (he plays football?), and very attractive. But he's also sweet and caring and considerate, and he has a lot on his plate. I feel so bad for him! You could say that he has daddy issues. But he loves his younger sister, and he is great to Sloane.

Sloane doesn't jump right into things with Finn; the romance is progressive, not sloth-like, but not lightning-fast. I like the pacing of the development of their relationship. It takes about half the book for them to finally kiss! But it was sweet and steamy and totally them. I like that Sloane doesn't transition from one guy to another. She'd known Tyler for so long and had been with him for quite sometime. It wouldn't have made sense if she had forgotten all about Tyler. She was angry with him, and hurt, but she didn't make irrational decisions with Finn, nor was she using him as a rebound,

There is some slight drama in this book, but I thought everything was so realistic and so justified. The initial drama, in the first scene, when Mick tells Sloane what she and Tyler did - that was the biggest dramatic scene, and I felt angry right along with Sloane, so I didn't really consider this "drama". The climax had some drama, but it resolved itself quickly enough that it didn't bother me too much.

I just really like how realistic all of the situations seemed. All of Sloane's emotions, her pain, her anger - I felt everything with her, exactly like she did. Schneider got it all right! And the feels! I got hit right in the feels in more than one scene.

The secondary characters were fun to follow! Penn, Sloane's brother, was pretty funny. I liked Mia, though she is a little too free-spirited for me. Maile is a sweetie! And I liked Sloane and Penn's mother more than I thought I would.

I haven't really mentioned the romance - the romance was so, so sweet. And pretty steamy. The chemistry between Sloane and Finn is pretty instant, but the emotions/romance develops beautifully. There is no Tyler - while Sloane thinks about him like once or twice, he never had a chance.

How Sloane handled Mick and Tyler - well, she did better than I would have. Mick turns into an uber b**** at the end of the book, and Sloane is kind about everything. I'm glad Sloane is able to move past everything, but I'm also glad that she doesn't simply forgive anyone.

Overall, I really liked this book. It's getting 4.5 stars from me (though I am rounding down). I am definitely interested in reading more by this author!

Hmmm, maybe I wish Sloane weren't as nice as she was at the very ending of the book, with Mick? Tyler too. I wish she yelled at them some, got it out of her system. Tyler cheated on her! Mick slept with her boyfriend! Both of those are unforgivable to me (especially when they are one and the same). There was one point where I was worried about Sloane and Finn, but it ended up being some miscommunication drama (the worst - but it wasn't bad, in this book). The drama overall wasn't bad! It could have been worse.

I'd recommend this book, especially if you like YA contemporary novels! This book touches on some tough issues (which I won't mention specifically because *spoilers*), in both Sloane's life and Finn's life (and actually, Penn's life too). And the romance is sweet and sizzling! The characters are wonderful and our OTP is shippable.

4.5 stars -> rounded down to 4 stars. I will definitely be looking out for more books by this author in the future! I'm curious to see if the author will write a companion novel (maybe for Penn? Or even Tyler. Not Mick though.) - that would be great!