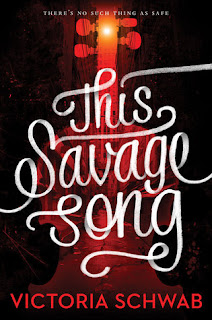 There’s no such thing as safe in a city at war, a city overrun with monsters. In this dark urban fantasy from acclaimed author Victoria Schwab, a young woman and a young man must choose whether to become heroes or villains—and friends or enemies—with the future of their home at stake. The first of two books, This Savage Song is a must-have for fans of Holly Black, Maggie Stiefvater, and Laini Taylor.

Kate Harker and August Flynn are the heirs to a divided city—a city where the violence has begun to breed actual monsters. All Kate wants is to be as ruthless as her father, who lets the monsters roam free and makes the humans pay for his protection. All August wants is to be human, as good-hearted as his own father, to play a bigger role in protecting the innocent—but he’s one of the monsters. One who can steal a soul with a simple strain of music. When the chance arises to keep an eye on Kate, who’s just been kicked out of her sixth boarding school and returned home, August jumps at it. But Kate discovers August’s secret, and after a failed assassination attempt the pair must flee for their lives. In This Savage Song, Victoria Schwab creates a gritty, seething metropolis, one worthy of being compared to Gotham and to the four versions of London in her critically acclaimed fantasy for adults, A Darker Shade of Magic. Her heroes will face monsters intent on destroying them from every side—including the monsters within.

I've read two of Schwab's adult fantasy novels, A Darker Shade of Magic and A Gathering of Shadows. But I'd not read any of her Young Adult novels, until this book. I knew this would be my first YA read by her, and I was pretty excited! I loved her adult books, and this YA novel was just as captivating as her adult fiction novels.

This is the story of two teens whose lives are about to intersect, in dangerous ways. Kate Harker is the daughter of Callum Harker, who runs North City, the north side of Verity City. Harker lets the monsters (Malchai, Corsai) roam free in the city. He is ruthless, and Kate wants to prove herself to him as ruthless like him (even more so). After getting kicked out of her sixth boarding school, Kate is finally where she wants to be - North City. August Flynn is a Sunai, one of only three in existence. He's a monster hiding in plain sight (the Sunai are the only monsters that look exactly like a human). He lives in South City, under the protection of his "father", Henry Flynn, who runs South City. August and his sibling Sunai, Leo and Ilsa, sided with Henry when the city was divided and a truce was made. But the truce is on the verge of breaking. August is sent to Colton Academy as Frederick Gallagher, in order to spy on Kate. But Kate finds out who he is, and Malchai try to kill them both, and everything changes. Things were set in motion, and Kate and August are caught in the middle.

Schwab writes so effortlessly! I can't even begin to describe who beautifully written this book is. It's like she puts a pen to the page and words flow on and on and in such an excellent arrangement. This author is an incredibly talented writer!

The world-building is superbly written. I like that we get to know bits and pieces of everything as the story goes. Initially, we don't know what August is, besides the fact that he is a "monster". We don't know much about the monsters specifically. We don't know everything all at once. Schwab gently breaks us into the story, revealing information as she tells the story. This was intricately done, and in a very impressive way! One would think I'd get annoyed by not having details about our characters and the world and the supernatural upfront, but I liked the slow reveal of information.

August is such a sweetheart! It's a weird thing for me to say, as he is a monster, and a rare one at that. He is one of three Sunai in existence, one of three "monsters" that looks exactly like a human. His monster ability is probably the most intense. The Malchai and the Corsai have claws and rip things apart (one of them drinks blood, I can't remember which). The Sunai are so different, and so powerful. August, however, isn't like his calm brother Leo, who is incredibly powerful and a natural leader. He isn't like his sister Ilsa, who is powerful like Leo (maybe even more so?). August is powerful, but he holds himself back. More than anything, he wants to be human. He wants people to value him not as a monster or a tool, but as a person. He wants to exist without fear.

I wanted to hug August, at so many points in the book. His mental and emotional state of mind broke my heart. He needs some love, people! I sincerely hope he finds some kind of comfort and/or care in the next book/by the end of the series.

You'll notice the violin on the cover of the book - it is very important in the story! You'll have to read the book to figure out why. It is August that plays!

Kate is vicious, hardened, devious, calculating. She wants to be as ruthless as his father, a human who leads Malchai. Many of her motives are to get his attention, and to prove that she is not weak, and that she is just like him. Kate wants power. And Kate is very smart - she figures out what August is after just a few one-on-one chats with him, at the Colton Academy. They bump into each other and talk several times, and Kate is able to put together clues. As ruthless as Kate is, she is also a little scared and vulnerable, and tries to hide this side of her as best as she can.

I love how Schwab digs deep into her characters, and draws out the good and the bad, the self-loathing and the doubt, the ambition and the despair. And in both Kate and August. I felt more bad for August, given that he so desperately does not want to be a monster, but I also felt bad for Kate, because she's trying so hard to be a cold creature like her father.

I'm not sure if we can call Kate and August friends, even at the end of the book. When they first met in this book, they were Freddie and Kate (August was under disguise). Kate finds out who he really is about halfway through the book. He saves her life, she saves his, he saves her life again - they don't abandon each other, even after Kate finds out who/what he is. I like that it's two broken teens on the run together.

On that note -- there is no romance in this book. Sadly for me. BUT. This book doesn't need romance, and it functions well without it. It's nearly five hundred pages and it's jam-packed with action and some well-placed angst. So, no romance!

As I said above, this book was nearly five hundred pages long. The beginning was a little slow and took me a bit to get into the story, but overall, I was hooked. I think I latched on pretty tightly when both Kate and August were finally on their way to Colton Academy. From then on, this book was quite a ride!

I cannot wait to read the next book. Thank goodness this series is only a duology! I am loving this duology trend. More please, Ms. Schwab!

This is going to be a strange complaint, but the synopsis led me astray a little. The way the synopsis sounded, I thought Kate found out about who/what August was fairly quickly into the story. "But Kate discovers August’s secret, and after a failed assassination attempt the pair must flee for their lives." This actually happens more than halfway through the book (closer to 60%, maybe even beyond). This isn't a complaint on the story! More like a complaint about the synopsis.

On that note, I thought the first, let's say, 10% was slow. Nothing to put me off, but I thought I'd mention it so that others might know to keep going for sure!

Would I Recommend It

I highly recommend this novel! You don't have to love fantasy (it's like futuristic paranormal, kind of? I'm not sure what I'd classify the book, in terms of genre, to be honest). It's more like urban fantasy? In any case, you don't have to know or love fantasy to enjoy this book. The emotional depth to this book is incredible! And I loved our two protagonists, and the wild ride they take us on. I can't wait to see what shenanigans they find themselves in, in book two!

4.5 stars -> rounded down to 4 stars. Generally my thing about 5 stars is that the book has to be a new favorite for me to rate it 5 stars. I'll hold off until I read book two, because conclusion novels can make or break the series. But this book is receiving a high rating and high praise from me! I'm trusting Schwab to deliver a high-action, satisfying end to the story.