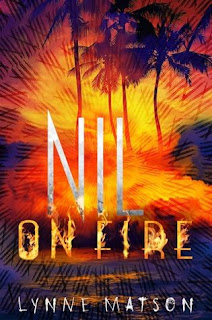 I liked this book, but not enough to give it a very positive rating. Three stars is positive, but I'm a little disappointed that I didn't like this book more. I think a lot of it had to do with personal preferences and likes/dislikes, and I think others might really like this book.

When Rives and Skye escaped Nil in Nil Unlocked, they thought they were finished with the island. But Skye has been having terrible dreams about a darkness, and a girl calling her back to Nil. Little by little, Skye begins to shut out Rives. So what can they do? Skye and Rives decide to go to the Death Twins islands in Hawaii, along with Thad and Charley, to try and stop the island once and for all. But the four of them get sucked right back into the thick of things, and they find themselves back on the island. Paolo is there, along with a dozen or so new inhabitants. Together, the teens try to solve the riddles and destroy Nil forever. But at what cost?

The beginning part of the book is fairly boring, not going to lie. Things really start to get interesting when Rives, Skye, Thad, and Charley go to the islands to stop Nil, but end up getting thrown back onto the island. And just like that, they need to figure out how to how to destroy Nil in three months, when the equinox rolls around.

This book is very much focused on Rives and Skye, and not so focused on Thad and Charley. All of the characters play a huge role in the story, but Rives and Skye are our protagonists. I love Rives! He is an alpha teen male, a leader, and a protective, loyal boyfriend. Part of me thinks Skye doesn't deserve him - he's too good for her (see more on this below).

Matson does a great job in fleshing out all of the characters, despite there being so many of them. Zane is so hip and cool, and I love the way he talks. Hafthor is calm and wise. Carmen is craaaazy. Paolo is intelligent and deep. Lana is constantly in denial (in my opinion). Molly and Davey are so cute. You see what I mean. Each character has their own personality, each is different in their own way. Sometimes when you have so many characters, they can start to blur together. Not so, with these secondary characters.

This book is well over four hundred pages, and I would say that the last one hundred and fifty pages or so are the really exciting ones to read. It felt like nonstop planning, figuring out, twists, revelations. Like everything was finally coming together and people were finally understanding things. The climax was action-packed too! I felt like the ending was abrupt, but the action leading up to it was good.

I enjoyed the edge-of-your-seat action, trying to find out if they would succeed in destroying Nil or not, trying to figure out the clues. Fun stuff! Scary stuff. Overall this is a good conclusion novel, and it probably does the series justice. I just did not like it as much as I liked Nil and Nil Unlocked.

From the start, I just could not deal with Skye. I remember liking her in Nil Unlocked? I pretty much hated her from page one of this book. Everything about her rubbed me the wrong way. She refused to open up to Rives in the beginning. Why? Pride, tough-girl-attitude, she doesn't want to stand behind her boyfriend... there is a difference between a man swooping in and fixing your problems, and someone offering to help you. It doesn't break the rules of feminism to accept help.

And this attitude is present throughout the entire book. Skye just does not lean on Rives, does not let him in. She pushes him out every single time things get worse. She leaves him in the dark, and most of the time, for no good reason. Honestly I want to say she's dumb or crazy or mental but then I try to remember that she has Nil in her head... but no, some of the (poor) decisions she made when it came to Rives were all on her own.

There were some seriously cheesy, poorly written lines in this book. I would pull the lines directly but I've lost access to the book so I can't share them (my fault for reading this eARC at the last minute). There was a lot of "telling" where there could be "showing", and cliches upon cliches. Who even says things like "I'm a big girl" when trying to express a feminist point about something or the other? In the context of the situation, it seemed so 90's and totally cliche. You'll just have to trust me - this was one example of many.

So basically, I couldn't stand Skye. I wish this book weren't so dependent on her! Why did the author focus just on her (and Rives, by default)? Literally all of the bad things in this book (like, the four of them landing in Nil again in the first place) could have been avoided if Skye had been smarter.

It's hard to love a book when you hate the book's protagonist.

I totally recommend this book, if you've read the other two in the series. There is no way you can't! This book is action-packed and the ending, while abrupt, does wrap up the loose ends. It's a good conclusion novel, especially if you like Skye. I liked her in Nil Unlocked but hated her in this book, so there really is no telling.

Anyway, if you haven't read any of the books in the series, I'd caution you. You're not necessarily missing out on much if you decide you're not interested in the series. It's a fun (and sometimes creepy) series, but not life-changing or anything. Just an honest opinion.

3 stars. I seriously wish I could rate this book higher - not that 3 stars is particularly low. I'm a huge fan of the author (she's so nice!) and I loved the first two books, so it hurts me to rate this book less than four stars. But hopefully my points make sense! Like I said in the beginning of this review, it could very well just be me.