Review: Under the Wire by HelenKay Dimon 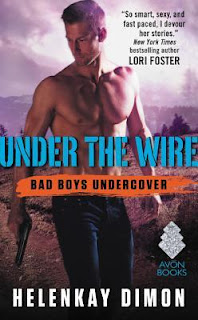 The Bad Boys of the Alliance—a top-secret military security agency—are back for more in HelenKay Dimon’s sexy, action-packed series

Only one thing could pull Reid Armstrong away from a vacation he’s earned with every muscle in his finely honed body—learning that his former fiancée has disappeared on a top-secret science expedition in the middle of nowhere. Second chances don’t come often in Reid’s business, and he needs to prove his worth to Cara Layne or die trying.

Waking up to find her camp destroyed and her colleagues missing, Cara is a walking target. She can’t trust anyone, least of all Reid. Even if his skills get them out alive, he’s a heartache waiting to strike twice. Yet being in close proximity proves their connection burns hotter than ever.

The body count is rising, the enemy is getting closer, and soon Reid will be right back in the position that cost him everything—forced to choose between the woman he loves, and the job that’s his only hope of saving them both . . .

I love HelenKay Dimon's romance novels. My absolute favorite is Mine (with Berkley Romance), but I also loved Everything You Need To Know (with Harlequin). This Bad Boys series with Avon is new to me. I got the first book in paperback via the Avon Addicts program, but unfortunately hadn't gotten to read it yet. It looks like that is going to be fixed very soon. I LOVED this fourth book!

Reid Armstrong is supposed to be taken a vacation from his CIA/MI6-type job. Instead, he's trekking through Russia, tracking his ex-fiancee after her brother noticed that she hasn't communicated recently, while on her geology expedition (she's a geologist). Cara is in danger - her camp was destroyed and she was dragged away, and she escaped. Reid finding her is both a blessing and a curse - she needs him in this rescue, but she hasn't seen him in sixteen months since she broke off the engagement and left him. But the sparks haven't fizzled, and the chemistry between the pair burn hotter than ever. Reid needs to get her out of Russia, but it'll be harder than expected, given that her geology mission wasn't all that was happening, whether she knew it or not...

I love that this story is so much more than a hot romance! I mean, the romance is super hot and so well-written, but this series is all about this secret department of the government that does spy/modern-day assassin kind of things. Reid is part of this agency, as is his friend Parker. Reid drags Parker with him to track Cara. It turns out that Cara isn't just taking soil samples. But it also turns out that someone is after Cara's team, for other reasons. Reasons that Reid and Cara slowly discover, as they try to make it to safety (Parker was sent ahead, lol).

Reid is such a sweetie! He's a bad boy (as this series' title would suggest), with lots of confidence (though not arrogance, not really) and charm. He is incredibly good at his job, and puts his life on the line for others constantly. As soon as he is in warrior mode, he becomes deadly and icily calm and efficient. The man was shot three times during this novel (which, by the way, lasted a span of days, not weeks/months). Reid is so selfless and tough, and it's no wonder he doesn't always open up about his past.

Cara, on the other hand, wants him to open up. She is much more expressive and wants Reid to, well, express. Cara isn't part of the agency, but she is brave nonetheless. She sees so many horrible scenes and events during the book, but stays strong. I hate how and why Cara broke the engagement with Reid, but at the same time, I could see things from her side. I just didn't like those things. Reid proposed to Cara fairly quickly after meeting each other, but Cara said yes, so she's equally "to blame" for things.

I think these two are such a great pair together! They really balance each other out - Reid is calm and collected, Cara is a little jumpier. This is a second-chance romance story, which I love. This is partly why having the book span over such a short time works - the couple is very acquainted with each other. Yet so, so much happens between them, emotionally and physically, in those few days.

Did I mention how great the chemistry between Reid and Cara is? So, so hot. All of Dimon's books that I've read have been some of the steamiest (and often unique) romance novels, and this book is no exception. I think I would have wanted one or two more, err, complete steamy scenes (if you know what I mean), but I also think what Dimon did have in the story worked well.

There is also such an emotional story to their relationship! I got hit right in the feels several times. I'm not complaining! I love experiencing their hurt, their disappointment, their slow build of trust again.

So many plot twists and turns! This isn't just a romance story - there is a lot of interesting spy stuff and conspiracies and betrayals. So cool! I liked how things were shaken up, from start to finish. I also like how Dimon worked in these spy twists and turns into Reid and Cara's relationship - meaning, the twists and turns brought them closer together.

Overall, I really liked this new Dimon book! I think my favorite of Dimon's books is still Mine, but this one was excellent.

One or two more steamy scenes that go the distance! All I would ask for. The emotional journey of the relationship in this book is SO well-written. Just a bit more physical scenes would have made the book PERFECT!

I recommend any of Dimon's books, if you are a romance reader! For me, she is right up there with Tessa Bailey and Katee Robert, Tessa Dare and Elizabeth Hoyt, queens of contemporary romance and historical romance. This particular Dimon book is so enjoyable, and so wonderful!

4.5 stars -> rounded down to 4 stars. I'll definitely be picking up my copy of book one that Avon sent me! I think the cover of that book threw me off so I didn't read it, but I regret putting it aside now!