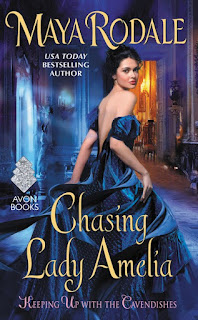 Terribly Improper
Lady Amelia is fed up with being a proper lady and wishes to explore London, so one night she escapes…and finds herself in the company of one Alistair Finlay-Jones. He’s been ordered by his uncle to wed one of the American girls. How lucky then, that one of them stumbles right into his arms!

Totally Scandalous
Alistair and Amelia have one perfect day to explore London, from Astley’s Amphitheater to Vauxhall Gardens. Inevitably they end up falling in love and making love. If anyone finds out, she will be ruined, but he will win everything he’s ever wanted.

Very Romantic
When Amelia finds out Alistair has been ordered to marry her, he must woo her and win back the angry American girl. But with the threat of scandals, plural, looming…will he ever catch up to the woman he loves?

My true rating is 3.5 stars. I liked this one enough to want to round up to 4 stars, but it wasn't quite a 4-star read. I LOVED Lady Bridget's Diary (it got a rare 5 stars from me), but I didn't love this second book quite as much. You can read these books in the series as standalone novels, so if I had to skip one in the series (so far), it might be this one. Still, it was good!

This story is told concurrently with Lady Bridget's Diary - meaning, we start this story with the same ball in which Amelia takes her shoes off (if you read book one, you know the scene). Basically, this story does NOT follow after the end of book one. Rather, it is told simultaneously! Which makes a lot of sense, if you have read book one and was wondering what Amelia had gotten up to, for those couple of days when she disappeared. Well, this book goes into those few days, in detail.

Amelia doesn't want to fit in to London's polite society. She loves horses and horse-riding, not stuffy balls and flouncy dresses. After a disastrous night at a ball, her family spikes her water with laudanum so that she'll calm down. Except that the laudanum has addled her brain, and she goes out in the middle of the night like a drunk. And runs into Alistair Finlay-Jones. Alistair isn't going to leave a helpless (and possibly drunk) noblewoman outside in the middle of the night, so he takes her to his residence. The next morning, he sees the paper (with Amelia's shoe scandal at the ball that previous night), and realizes that the woman is Lady Amelia. And thus begins the pair's adventures together. But all good things must come to an end - right? Amelia can't go gallivanting around London unchaperoned forever, and Alistair was called back to London for a reason: marry an heiress.

Book one took place over weeks. But the majority of this book took place over two days. These two days were the ones in which Amelia disappeared (causing another Cavendish scandal, if you recall in book one). When Amelia wakes up in Alistair's house, he gives her money and sends her on her way... but Amelia has no plans of going back home, not yet. She and Alistair go to the market, the theater, back to his house... anywhere but Durham House.

So the time period was short, which was weird at first. Amelia and Alistair have this instant connection that begins as friendly camaraderie and whatnot, but develops into hardcore lust, all in one day. They know each other for two days, but it would seem that they fell for each other, in lust and in love. But as improbably as this sounds, Rodale definitely sells the romance. You can feel how much these two want to stay together.

Amelia is so wild and uncouth, totally not fit for polite society, in my opinion. She is the youngest Cavendish sibling, and she tries the least. For the most part, I like her. She has relapses and judgment every now and then, but I like her sense of adventure.

Alistair has been touring the world for six years, and he's been called back by his uncle, who wants him to marry an heiress. Alistair isn't a fortune hunter, but his uncle is, and because Alistair is his uncle's heir, Alistair will do as his uncle bids. Tragedy struck the family years ago, and Alistair and his uncle do not get along anymore. I feel for Alistair! He feels like he is not good enough to be in society, for several reasons. He is quite a nice gentleman, and very sweet and patient. I like him! So different from Lord Darcy (from book one) - sweeter and less uptight. I do prefer Darcy (sorry, Alistair!), but I like Alistair a lot.

Their romance was fast, and not slowly progressing like I'm used to experience in historical romance. But the chemistry was there, as was the development of feelings and such. There was a little angst associated with their relationship - both hid things from each other. But I liked how things worked out!

The ending surprised me a little, but somehow, subconsciously, I totally saw it coming. A great HEA for sure! Just a bit surprising. I think it works for Amelia and Alistair very well! I think this book was a good addition to the series, and I am definitely interested in reading Claire's book next.

I thought the fact MOST of this book takes place over two days was a little two fast for me. Meaning, Alistair and Amelia get to know each other and feelings of love and lust develop in those two days. Rodale spends a ton of page-time fleshing out these two days, so that the two days takes like, 50% of the book. But logically, it felt too short.

And then the proposal and the scandal and the surprise - it just seemed very fast to me. This book took place over a shorter time than book one for the most part; the last, hmmm, one fourth of this book takes place over a few weeks. But the majority of Alistair and Amelia's interactions come from two days of interactions.

More steamy scenes, please! At this point, after reading many Rodale books, I've come to expect less steamy scenes than usual. But that doesn't stop me from wanting more.

So if you liked book one in this series, this book is worth the read. At the same time, book one was a lot better and more enjoyable. You could skip this one (and in general). It's not entirely necessary to read in the series. While it clears up a lot about what Amelia had been doing over the days she disappeared, and we learn all about Alistair's tragic past, I wouldn't necessarily fall over myself trying to read or recommend this book two someone.

3.5 stars -> rounded up to 4 stars. I think this series is hilarious! Rodale has such a distinctive and creative writing style, in the series. I much preferred Lady Bridget's Diary, but this book was satisfying in the series. I can't wait to read Claire's book next!