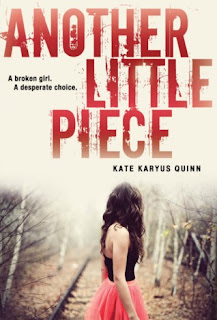 On a cool autumn night, Annaliese Rose Gordon stumbled out of the woods and into a high school party. She was screaming. Drenched in blood. Then she vanished.

Now Annaliese is haunted by strange visions and broken memories. Memories of a reckless, desperate wish . . . a bloody razor . . . and the faces of other girls who disappeared. Piece by piece, Annaliese's fractured memories come together to reveal a violent, endless cycle that she will never escape—unless she can unlock the twisted secrets of her past.

First, I would like to apologize to the author, because I won this book in one of her giveaways around the time of the publication of the book. This was just about three years ago. No one is required to review or even read the books they win in giveaways, but I still feel a little bad knowing that I won the giveaway and read it three years later, while someone else could have won and might have read it immediately. But it is what it is! I liked the book (which is actually pretty surprising!).

This is my May Pili-Pushed read! To see any of my Pili-Pushed reads, see the "Pili-Pushed" tag at the bottom of my blog. Also, me winning the author's giveaway in no way influenced my opinion of the story. I liked it because it was great!

I honestly would not even know where to begin when trying to describe this novel. This books starts with Annaliese making her way over to a girl by a trailer. Annaliese has no recollection of where she is, or was. As it would turn out, Annaliese is the missing girl on Dateline, who was missing for a year. A year ago, Annaliese walked out of a forest covered in blood and screaming, and then she vanished. A year later, Annaliese is back, but with no memory. Annaliese does not seem like Annaliese though. She must rely on her the little memories that come back to slowly piece together what really happened a year ago, and why she's back.

What a strange book! And incredibly creepy. The first couple of passages were bewildering. I couldn't get a good feel of what was happening, but I was hooked.

This book is deceptively contemporary, and paranormal, and horror-ish. It's heavily paranormal, though I can't really say why without going into spoiler-y things. It's somewhat horror-y, or maybe that's just me and my scaredy cat self. The book is CREEPY. When you find out why Annaliese isn't exactly Annaliese, and what she's been up to... *shivers*

Despite this creepy stuff, I liked Annaliese (I'm going to call her Anna from now on). Anna isn't a kickbutt fighter like we see in so many YA novels. She's quiet and contemplative, and she has her quirks. She also has no recollection of anything, so she's a clean slate. But she's still a teenage girl. She doesn't remember anything, and this frustrates her parents, which frustrates Anna. She feels trapped and smothered, especially by people she doesn't know.

We meet several peers of Anna's fairly quickly. Eric, who is flat-out creepy. Logan, who shoulders some guilt and blame relating to what happened to Anna (not his fault though). Dex, the next-door neighbor who knows a lot more than he wants to know, who is quiet and understanding. Gwen, who was Anna's best friend. Kayla, who is mean.

There is a little romance in this book! I found it sweet and charming. At first it seemed to have caught on very quickly, but I think there was lust first and then the emotional response. Which I'm fine with. I like the pair (Anna and someone else...). No love triangle!

I don't want to say anymore about this book, for fear of ruining surprises. The author weaves in twist and turn and surprise with ease. We don't get to know everything up front, but I love how the author reveals information slowly but sensibly.

So, overall, I liked this book! I see that there are lots of mixed reviews for this book, but I'm glad I liked it. It was creepy and haunting - two things I generally don't go for - but definitely intriguing and it had me hooked. And the ending was weird! A little open-ended, but not really. It wrapped up pretty well. A very good job by the author!

I can't think of anything specific! I liked this book but didn't love it, so it's getting four stars (and not five stars). It was a good read!

If you like some creepy fiction, I definitely recommend this book! It's not really scary (unless you're me and are afraid of everything and anything remotely scary), but it has horror-ish aspects woven into the story. The paranormal is both very present and barely there. If you like a good suspense-type novel to read (it's not a mystery book though), this is a good one!

4 stars. I'm glad I tried this book! I had the copy for three years without picking it up. Thank you, Pili, for pushing me in the direction of this one!