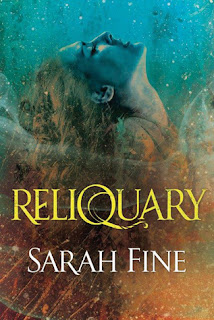 Mattie Carver’s engagement party should have marked the start of her own personal fairy tale. But when her fiancé, Ben, is violently abducted the next morning, her desperate quest to find him rips her away from small-town life and reveals a shattering truth: magic is real—and Ben is hooked. It’s not the stuff of storybooks. It’s wildly addictive, capable of producing everything from hellish anguish to sensual ecstasy almost beyond human endurance.

Determined to find out who took Ben and why, Mattie immerses herself in a shadowy underworld and comes face-to-face with the darkly alluring Asa Ward, a rogue magic dealer, infamous hustler…and her missing fiancé’s estranged brother. Asa has the power to sense magic, and he realizes Mattie is a reliquary, someone with the rare ability to carry magic within her own body, undetected. Asa agrees to help find Ben on one condition: Mattie must use her uncommon talent to assist his smuggling operations. Now, from magic-laced Vegas casinos to the netherworld clubs of Bangkok, Mattie is on a rescue mission. With Asa by her side, she’ll face not only the supernatural forces arrayed against her but the all-too-human temptation that she fears she can’t resist.

It breaks my heart a little, to give this book a less-than-super-positive rating/review. If you've been following me and my blog, you know how much of a Sarah Fine fan I am. This is the eleventh book by her I've read (Sanctum, Fractured, Chaos, Scan, Of Metal and Wishes, Of Dreams and Rust, Marked, Claimed, Fated, The Impostor Queen, Reliquary). Of those eleven, nine have received four stars or higher. So, you can probably imagine how I feel. While I liked this book enough to want to give it a positive rating, there were aspects of this book that I didn't enjoy.

Hours after her engagement party, Mattie Carver wakes up and finds up fiance Ben missing, kidnapped from their house. Ben was perfect and kind and sweet - who would do this? It turns out that Ben was hooked on addictive magic, and he owned someone a lot of money. Mattie throws herself into this dark world, and finds out that she's a reliquary, a vessel for magic. With the help of Asa, Ben's estranged brother (whom Mattie finds by accident in a magic den), Mattie sets off to find Ben and bring him back. But Ben wasn't nearly as innocent as Mattie thought, and there are larger forces at work. Mattie and Asa head to Las Vegas, and then San Francisco to Bangkok, trying to find a relic in exchange for Ben's life.

There was plenty I liked about this book. For starters, I liked Mattie. She's sweet and a little naive and a do-gooder, but not in an annoying way (the do-gooder part). She is fiercely loyal to Ben and doesn't suspect anything bad in terms of him and why he disappeared (she never knew about his money problem, or the magic). Mattie talks a lot and gets on Asa's nerves all the time. She isn't too subtle and she's also a little clumsy. I like her.

I never, ever liked Ben. From the start, I wasn't buying his perfection, his nice-guy act. Sarah Fine writes him in a way that readers are suspicious of him, in Chapter 1. There is something wrong with him that we can't place our fingers on. And then we find out that he owes money, he's an addict, he used magic on Mattie - I never liked him, but I liked him less and less as the story went on. There was nothing Mattie wouldn't do for him, which was pitiful. Even as she found out everything he was doing, she was still bent on finding him. Understandable, you thought you knew your fiance so well, and loved him...

Ben is barely in the book. Thank goodness.

Then there is Asa, who dominates the story. We meet him fairly quickly. He is a sensor, a rare type that can sniff out magic. He's so rare that everyone wants him on their side, so he's always on the run. He doesn't want to be caged in, no matter the price. Asa comes across as a cursing, scolding jerk, but he is actually a loyal and genuine guy. He is very crafty and has good instincts for survival. He's much more sensitive than Mattie initially thought. And he's estranged from his brother for a good reason. Another reason for me to h a t e Ben.

This world's magic is pretty cool. Cool, but also wicked and scary. There are four types: emotion, manipulation, pleasure, and pain. And there are people that wield each type of magic. The magic dens that Mattie finds in search of Ben, where she meets Asa, are full of pleasure (which is what Ben was hooked on, I believe). Mattie was surprised!

One thing I can say about this story (and all of Sarah Fine's books) is that I was never bored, and I couldn't read fast enough. I was apprehensive initially, because of the potential love triangle (I'll get to that), but I couldn't stop reading. So much action! There weren't twists and curveballs at every page, but Asa and Mattie were constantly on the move. The settings were vastly different and well-written, as per usual!

As much as I liked the high stakes and high action and wonderful characters, the next section is going to dose the flames a little.

There may be slight spoilers in the section, but I'm forging ahead.

I'm not a fan of the romance. We know from the start that Mattie is engaged to Ben, and it's clear that they're both in love and devoted to each other. When Mattie finds out that Ben was hiding so much from her AND manipulating her using magic, she's still determined to find and free him. She's incredibly loyal to him - and like I said before, that's understandable. Even if he is a terrible person. I don't like Ben. He seems too perfect initially, and then we found out how awful of a person he actually is. Not a fan.

What's worse is the obvious love triangle. Mattie has loved Ben for a while now, but it's obvious that after this book, after weeks of traveling with Asa, she has feelings for him. Love and lust all tangled up in one, when it comes to Asa, and unlike with Ben, it seems more real.

Here is the spoiler-y thing I will say - Mattie is engaged to Ben and has obviously had sex with him. She and Asa do not have sex during this book (thank goodness), but they share a lot of intimate interactions. There are a few kisses, though some of them were to distract (at one point, Mattie and Asa had to act like boyfriend/girlfriend to blend in). I hate basically all and any love triangles, and I especially hate how Mattie realizes she wants Asa too, but it's clear that she will never want to be with him. Given the tragic events in Asa's past, it's so unfair that he's alone alone alone. I'm not saying it's Mattie's fault necessarily... but Ben is a terrible person, Mattie clearly has strong feelings for Asa (and vice versa), and Mattie makes the choice, in the end.

I h a t e the ending. I hate it. You can probably guess why. I know this isn't the end of Mattie's story (there are two more books to follow), but as this book stands, I am not a fan of the ending. Part of me understands why Mattie did what she did, but there is one part of the ending that Mattie did that I abhor. I felt a little betrayed by that!

Things I hope for, in book two: for Ben to jump into incoming traffic (he won't), for Mattie to realize what she did (she knows but won't change anything), and for Asa to find some comfort. The poor man needs a hug.

Obviously if you have zero issues with love triangles, you'll be fine. I hate them and that's not going to change - especially with a love triangle like this, in which one of the "options" is a terrible person.

I can't recommend this book - at least not yet. I'd say wait until the series is completed - which should be in November! Book two publishes in August, and book three in November. I would just wait it out. I want to have faith in Sarah Fine (the romances in her books are usually very linear and SO good!) but this love triangle appearance has me doubting. Also, this book contains very adult scenes, for those wondering!

3 stars. 2.5 stars? The thing is, I liked the book. I liked the magic, the world-building, the characters (minus Ben). I did not like the romance. None of it seemed fair to Asa. And that thing Mattie did at the very end? I personally was not a fan. But I want to read the rest of the books in the series, to find out what happens!