Science in Fiction (#16): Lotus and Thorn by Sara Wilson Etienne 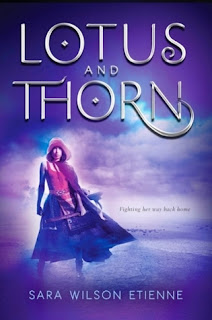 When I first saw Lotus and Thorn, I immediately thought, high fantasy coming at us! Woohoo! This was entirely based on the cover. I quickly realized that this book was heavily science-fiction-based, and in a very intriguing way. In this story, Earth was abandoned half a millennium, and the humans are now on the colony planet Gabriel. Food is scarce, disease runs rampant, and water is precious. The Curadors, who live in the Dome, can't even leave the Dome without protective gear, because they can no longer survive outside.

I'm taking my topic today somewhat tangentially from this book. I want to talk about climate change and the future of our Earth. There is a good chance that this won't be the last time climate change is featured on Science in Fiction!

Drivers of climate change include:
(taken from the EPA, NASA)

- Increase burning of coal: this ties in with the greenhouse gas effect. Because humans have been burning more coal and adding more carbon dioxide into the atmosphere, climate change has been rapidly sped up.

Effects of climate change:
(taken from the EPA, NASA)

- 2015 was the hottest year on record. Yup, that was a thing. NOAA and NASA have the data to back this up. While we're talking temperatures, check out this animation, that shows the annual global temperature change, from the mid-1800s to 2016.

- The Arctic, which is usually cold, has had record-low sea ice. This is terrible! The Arctic is one of the regions that keeps the entire globe fairly cool. But there has been less ice, due to melting ice, due to rising temperatures. The winter season has been too warm. More on this at Science Daily.

- Climate change could be causing a shift in the Earth's poles. Wild, right? The Earth is tilted on its axis, and the degree of tilt is dependent on the distribution of mass. If there is a change in the distribution of mass, e.g. when ice melts in Greenland, the poles shift. The North Pole, which usually drifted towards Canada, has started to drift towards the U.K. This is still a topic of research, so there is no causation proven, but the evidence is present. More on this at Science Daily.

- California has been experiencing a drought for years. Anyone Californians here? California has been experiencing quite the drought in recent times, and that's not about to change. It all goes back to the decreased snowpack, which meant less water from the mountains. And a lack of rain is a problem. And it's pretty hot over there, for the most part. All of this leads to a lot of water conservation policies.

I could go on and on. Climate change is real, it's scary, and it's not going away. For anyone that doesn't "believe" in climate change... open your eyes! Our Earth is in a sad state, especially compared to ten, twenty, fifty years ago. Who is to say we won't end up like the Earth of Lotus and Thorn?

What are your thoughts on climate change?
Posted by Alyssa at 12:00 AM