Review: Children of Earth and Sky by Guy Gavriel Kay 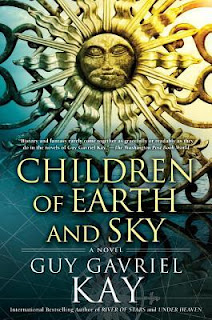 The bestselling author of the groundbreaking novels Under Heaven and River of Stars, Guy Gavriel Kay is back with a new book, set in a world inspired by the conflicts and dramas of Renaissance Europe. Against this tumultuous backdrop the lives of men and women unfold on the borderlands—where empires and faiths collide.

From the small coastal town of Senjan, notorious for its pirates, a young woman sets out to find vengeance for her lost family. That same spring, from the wealthy city-state of Seressa, famous for its canals and lagoon, come two very different people: a young artist traveling to the dangerous east to paint the grand khalif at his request—and possibly to do more—and a fiercely intelligent, angry woman, posing as a doctor’s wife, but sent by Seressa as a spy.

The trading ship that carries them is commanded by the accomplished younger son of a merchant family, ambivalent about the life he’s been born to live. And farther east a boy trains to become a soldier in the elite infantry of the khalif—to win glory in the war everyone knows is coming.

As these lives entwine, their fates—and those of many others—will hang in the balance, when the khalif sends out his massive army to take the great fortress that is the gateway to the western world...

I don't even know where to begin, with my review of this book. Like most adult fiction novels, it's complex. Complicated. Intricately yet intensely written. If you find this review lacking, well, it's because this book is not easy to review! I was very satisfied with this book, and highly enjoyed it.

There is conflict, between the lands of Senjan and Seressa. An artist is sent to spy on the Khalif, as well as a young woman posing as the wife of a young doctor. A young Senjan woman wants revenge for her lost family. A second son of a merchant owns a ship, and is ferrying the artist, the doctor, the and the doctor's fake wife to Dubrava. A young boy is training as a djanni to be a soldier in the infantry of the Khalif. The lives of all of these people will intersect, as a war is emerging.

I love how this story unfolds. There are so many characters, so many protagonists, so many names to keep track of. In the beginning of the book, there is a handy list of all of the important characters. That was really helpful! Overwhelming at first, but definitely helpful. The story is told slowly in each character's third-person perspective. Within each chapter, the perspective switches (in an obvious way), and between each chapter. Information is revealed slowly, and I like how everything comes together like a puzzle, as the story progresses.

There are so many characters that I could name and discuss. Pero is the young artist who is sent to spy on the Khalif by painting his portrait. Pero is quiet and not a violent man, but his role in the story is pivotal. Danica is the young Senjan woman seeking revenge, who joins the crew of the ship with Pero, the doctor, and the doctor's wife. The doctor, Jacopo, is no spy, but his fake wife Leonora is to be one. He is instructed to "marry" her (and she him) so that she will gain entry into Dubrava. I felt bad for Leonora! Not that she had to marry the doctor - no, Jacopo is kind and gentle and she has no issue with him (or he her). But her past life is so said.

My favorite characters are Marin, the second son of a merchant and owner of the ship, and Danica, the young Senjan. The Senjans are hated by many, and so Danica is never really welcomed. She's a raider, which is how she "meets" Marin and his crew. But she joins his crew for protection from her fellow raiders. Danica is so fierce! She is a strong young female character that I admire. Marin is a ladies man, a very handsome and very charming second son who is extremely clever as well. He's just as good with a sword as Danica is with a bow and arrow. I like him because he is very intelligent, but he's also a flirt (very roguish).

Each of the character's lives intersect with each other, in complicated ways. As one would encounter in adult fiction novels, there is a lot of slow-building action, and things can change in the blink of an eye, from one paragraph to the next. The pace of this book is slow, but skip a paragraph or a page and you've missed crucial information.

I didn't mind the pacing too much. This book is long, but so detailed. A lot of time passes in the story, from start to finish. While it is written in third-person and there are many perspectives, we get to know all of the characters extremely well. Especially Danica, Marin, Pero, and Leonora.

There is some romance! There are a few couples, and my favorite was Marin and Danica. As with many adult fiction novels, the relationships start with sex, and there is some somewhat explicit scenes (so this is definitely not for children). Marin is a ladies man, and so it's not surprising that he and Danica attract each other. What is surprising is the development of feelings - from both of them. None of the romances (there are several pairs) are terribly significant in the book, but they are there, in a peripheral sense. And there is some messiness to the relationships. So I would not read this book for the romance (and why would you, it's not a focus in the book).

On that note, this book is SUPER adult fiction-y, guys. Lots of sex, sexual acts (though not as explicit as adult romance novels), violence, and such. Some of the deaths totally caught me off guard, and I didn't see them coming. My feels!

Overall, I really enjoyed this book. Probably more than I thought I would (though I don't really know what I had been expecting!). This is my first book by Kay that I've read, and I liked it. While the first half (ish) of the book was a little slow, things really started to pick up about halfway.

This is the romance reader talking, but I would have loved to see more from Marin and Danica! The ending was incredibly sweet and made up for a lot of things, but still.

There is magic/spirits in this book, and I think I would have liked more explanation on that? Maybe it was supposed to have been explained by religion and faith, but I wasn't sure. Still, I liked the (small) presence of the supernatural.

I'd recommend this book but ONLY to seasoned adult fiction readers, or adult readers in general. Definitely not young teens or adolescents. It's an excellent historical-esque fantasy novel, but there are graphic scenes that I don't think would be appropriate for all ages.

4 stars. I am glad I took a chance on this book! The length had me hesitating, but this was worth the read. I'll be looking out for books by this veteran author in the future.