Review: Sins Of A Wicked Princess by Anna Randol 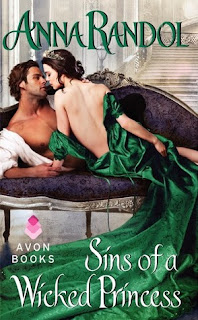 Ian Maddox, aka the Wraith, is happy to leave his life as a spy— as soon as he discovers who's been trying to kill his friends. All clues lead him to the bedroom of an exiled princess. Yet Princess Juliana isn't the simpering royal he expects, and this irresistible beauty agrees to give him the information he seeks…for a price.

Princess Juliana has never cowered—not even as she fled her burning castle in the midst of a rebellion—so she won't tremble before the darkly charismatic man who appears in her bedchamber and holds a knife to her throat. Instead, she bargains with the infamous spy to help her retrieve sensitive documents and restore her kingdom. But Juliana quickly finds that Ian is no humble servant, and she never imagines that lessons in thievery will lead to schooling in seduction.

I don't know why the overall Goodreads rating of this book isn't higher. I LOVED this book. There were so, so many wonderful things about this book that I really just did NOT expect. Or maybe I've been starved of a fantastic historical romance novel for too long. But this book seemed perfect to me. The characters are lovable, the plot was dynamic and interesting, the chemistry was steamy but not over the top, and this book was genuinely FUNNY.

Julianna makes a deal with "Wraith" - Ian: help her learn to be as sneaky as a thief, and she'll give him information about the "Trio" that he is a part of. Julianna needs to steal letters from a duke in order to save her kingdom. Ian needs information from her - he needs to know about who wants him dead (most recently). Eventually, Julianna and Ian decide to work together to get the letters, and Ian is hired as her footman. The pair, as well as the rest of Julianna's court, travel to the culprit's home (for a ball), and there, Julianna and Ian will attempt to steal the letters, and save the kingdom.

I LOVE that there is an actual plot to this book! This book could completely stand alone as a historical fiction novel, and does not necessarily need the romance! Of course, the romance was AMAZING and I loved it, but I'm just saying - the plot of this book was intriguing and interesting, and I wanted to know more. I wanted to keep reading, to find out about the letters, the tricky duke, the lying family member...

The characters are completely lovable. Julianna is feisty and fearless, Ian is clever and witty and so good at what he does. The two of them make a very interesting pair, both with strong wills. HOWEVER, I love that Ian is not overly alpha and macho, like most historical romance male protagonists appear to be. Ian is more laid back and chill, and it's so appealing. Everything is a joke to him, but not actually. More like, he has something witty or funny to say about everything.

I found that in this book, the chemistry was not flaming hot or flying off the page. This was different, but I really liked this, because there wasn't a sex scene or almost sex scene after every chapter or so. In fact, the author had a very, very few amount of sex scenes in this book. Don't get me wrong, the chemistry is HOT. But the author finds subtler ways than straight-up intercourse to make this book steamy.

I really enjoyed this book, you all. It was just about perfect. The ending comes in a rush, but it was a super great ending. Everything comes together in the end. If you get confused about something while reading, keep reading, because everything makes sense at the end. Or at least, that's how it was for me. So great!

I really have nothing to say in this section. Perhaps a few anachronistic phrases every now and then, but honestly, I am so willing to look past them at this point.

I would HIGHLY recommend this book, to historical romance lovers especially. Keep in mind, I did NOT read the previous two books in this series. But you bet I want to now. This book knocked my socks off!

5 stars. I can't believe I waited this long to read this book! Shame on me. I loved it so much!