Review: The Raider by Monica McCarty 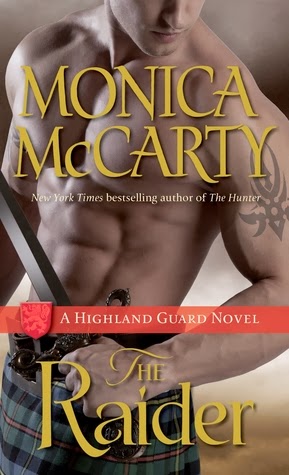 After consolidating his gains against the enemy English, King Robert the Bruce of Scotland sends his best soldiers to fortify the lawless borders. These legendary warriors of the Highland Guard let nothing come before king and country—except the calling of their heart.

Of all Bruce’s elite warriors, Robert “Raider” Boyd is the most formidable. A true patriot whose bare hands are a deadly weapon, Robbie is the fierce enforcer of the Guard, and his hatred of the English has been honed to a razor-sharp edge. But vengeance proves bittersweet when his enemy’s beautiful sister falls into his hands and he finds himself fighting temptation—a battle he badly wants to lose.

Lady Rosalin Clifford barely recognizes the rebel prisoner she saved from execution six years ago. Though her girlish ideals for fairness have matured into a passion for justice, Rosalin believes she betrayed her brother when she helped this dangerous man escape. Now her traitorous act has come back to haunt her. But she can’t deny the longing this tormented warrior ignites in her, or deny the passion that turns sworn enemies into lovers. Is the gentle love of a true English Rose enough to free Scotland’s most brutal warrior from a path of vengeance—before it’s too late?

Ooo, this book! I liked it a lot! It was just about the time for me to read a really good historical romance, and this book came through for me. I've only read the seventh book and this book in the series, so there are six books that I have to read, and of course, the future ones. Each book features one of the Highland Guard warriors, and I *believe* they are all Bruce's phantoms.

This book features Robbie "The Raider", and Rosalin. Six years ago, Robbie and several other Scots were captured by Clifford, Rosalin's older brother. Rosalin, being sixteen and totally crushing on Robbie, frees Robbie and his other comrades. He vows to pay her back someday.

Fast forward six years later. Robbie is sweeping through a fair, which Rosalin and her nephew attend. Both are taken by the Guard. Rosalin recognizes Robbie, but he does not recognize her. When she reminds him of what she did, Robbie is tormented: follow his duty, and keep her and the boy as captives, or follow his word, and let them go? In the end, Rosalin goes nowhere.

This allows the relationship between Rosalin and Robbie to grow. Both already had residual feelings for each other, but this gets serious really quickly. The chemistry between these two is fiery, and while both of them do a pretty good job of restraining themselves (especially Robbie, because he knows she's a captive), when things happen, they happen.

Nevertheless, I like the progression of their relationship. I liked watching Robbie and Rosalin fall in lust and love. They have hot chemistry, but they also have a really nice understanding of each other. In the end, both of them fought for each other, and both of them had to concede something to be together. Neither had it easy, but I liked how things ended.

I love the history that this novel brings about. McCarty really does her research with this series. I love reading about the Highland Guard, with all the strange Scottish names and places and language. The warriors are beautifully written, with their sense of honor and their brutal fierceness. Everything is portrayed with a good deal of accuracy, but also with a thread of modernism to keep things interesting.

Basically, I really liked this book. I really like this series. Each book features a different Guard, and I think it's cool to see each Guard reappear in each successive book. It makes me curious about the Guards who are single after every novel - hopefully, they'll get their own books!

I don't think there was anything specific that I didn't like about this novel. This book is long. That's not a bad thing, but sometimes, you just have to power through it. But otherwise, eh. It was great!

I would honestly recommend any of the Highland Guard books! I've only read book seven and this one, book eight, but I am quite sure that all of them are fantastic. If you're a romance novel lover, or a historical romance novel lover, this book (and series) is a good one!

4 stars. I really should go back and read the other six books of this series that I have not yet read. McCarty knows her Scotland history and a good romance!