Review: To Tempt A Viking by Michelle Willingham 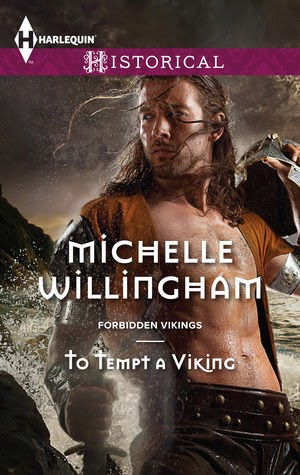 Warrior Viking Ragnar Olafsson stood by as his best friend claimed the woman he desired the most. There was only one way to quench the deep darkness within him—become merciless in battle.

When Elena is taken captive, fearless Ragnar risks everything to save her. Now they are stranded with only each other for company. Suddenly every longing, every look, every touch is forbidden. Elena could tempt a saint—and sinner Ragnar knows he won’t be able to hold out for long!

After reading To Sin With A Viking, I knew I could not wait to read the companion sequel novel! Yes, it featured Elena, and I was not a huge fan of her in the first book. BUT, it featured Elena, meaning that she would get her own happy ending! That was something I wanted to read.

Ragnar Olafsson has been in love with his best friend's wife since the three of them were kids, and no one was promised to each other yet. But he has never acted on his feelings or desires, nor will he ever do so, while Styr and Elena are married. Elena has always cared for Ragnar as a friend, as she has seen him through his worst as a young boy and young man, especially with the unique death of his father.

The other half of this book is spent on Ragnar and Elena, and their broken relationship. Elena is no longer married to Styr, but that doesn't mean that she can just climb into Ragnar's bed. Ragnar will not allow that, because he has his own demons to face. Ragnar has a twisted sense of self-worth, and doesn't believe that he deserve Elena. Nor does he believe that she could be safe from him.

I loved seeing the romance between Ragnar and Elena progress. There was always something there, but the time alone, the need for each other, Styr's departure, Elena's desire for children... everything just came together. The chemistry between these two sizzles, but neither can actually act upon their desires until way past Styr and Elena's divorce.

I liked how Willingham resolved the child issue. Elena is barren, and believes that she will never have children, because she never had a child or got pregnant for Styr. Well, Willingham created the prefect solution for Elena (and Ragnar) - doubly, if I may say so. I saw one of them coming, but not quite the entire scenario. Very cool!

Overall, I really liked this companion sequel novel. I really, really liked Ragnar, and while I didn't like Elena in the first book, I came to understand her in this book, and even like her. It was fascinating to see how the stories overlapped and intersected - it made things much more intriguing! This book is definitely worth the read.

I thought the first quarter of the book was a bit slow. I sort of powered through it, and by powered through I mean skim, sort of. Once I got past it, things started to get, um, interesting, between Ragnar and Elena, which helped me keep reading.

Not that I was ever in danger of NOT finishing this book. This book was too good for me to even consider that notion.

If you read and liked the first book, DEFINITELY follow up by reading this book. I thought I would hate reading Elena's story, because I thought she wasn't particularly pleasant in the first book of this series, but when you see her side of things, everything makes sense. I'm really glad I read this book. I recommend both books, for historical romance fans!

4 stars. Definitely an interesting and enjoyable companion novel! I wonder if Willingham has any more Forbidden Vikings books up her sleeve.