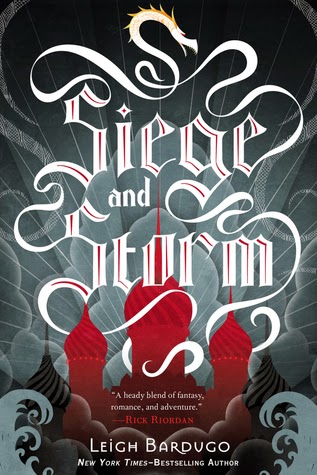 Hunted across the True Sea, haunted by the lives she took on the Fold, Alina must try to make a life with Mal in an unfamiliar land. She finds starting new is not easy while keeping her identity as the Sun Summoner a secret. She can’t outrun her past or her destiny for long.

The Darkling has emerged from the Shadow Fold with a terrifying new power and a dangerous plan that will test the very boundaries of the natural world. With the help of a notorious privateer, Alina returns to the country she abandoned, determined to fight the forces gathering against Ravka. But as her power grows, Alina slips deeper into the Darkling’s game of forbidden magic, and farther away from Mal. Somehow, she will have to choose between her country, her power, and the love she always thought would guide her--or risk losing everything to the oncoming storm.

What. A. Sequel. Wow. It took me long enough to read this one, right? I needed a little push, but I read it and I'm reviewing it, so that's what counts, right? But seriously, I have the worst fear of sequels - especially when the first book was SUPERB. I always think that the sequels are going to be painful (and possibly horrible) - and granted, sometimes, it happens! But the last bunch of sequels that I've read haven't been bad at all! And not too many cliffhangers, which is great.

THIS sequel is pretty amazing. I read Shadow and Bone about or over a year ago, so I'll be honest: I didn't remember too many specific things about the book. I remembered some names and roles and a few major events, but not much. I barely even remembered the climax of the book. HOWEVER, Bardugo does a fabulous job of getting readers back into the story. She actually didn't do too much of reminding readers what happened - she sort of jumped right into this book. It's definitely necessary to read book one, but if you were like me, and couldn't remember basically anything from book one, don't worry! You'll have no problems getting back into the story.

I actually think the summary is kind of vague and doesn't encompass the book very well, but I understand why - it would spoil A LOT if the summary included more general events of the book. Basically, Alina and Mal are on the run from the Darkling. But then he finds them somehow. Alina and Mal must work with a certain privateer and others in order to gather forces and fight the Darkling. But Alina must also gather power for herself, which is dangerous, as it makes her more and more like the Darkling. The stag's horns were just the beginning.

I love what Bardugo is doing with Alina. Alina is slowly becoming power-hungry, more and more like the Darkling. I feel like with fantasy novels in YA, in which the protagonist is extremely powerful, don't show this very well. Power brings about selfishness, a sense of entitlement, a sense of dictatorship. Bardugo is doing a very good job of showing this progressive change in Alina. Alina is NOT evil, and yet, as she tries to gain more power to fight the Darkling, she is becoming a little greedy with power. This makes her more like him than she realizes - until she DOES realize it.

This affects everything, including her disposition. She is sometimes cruel, and at times, enjoys the emotional pain of people that she does not particularly like. While I don't like this in Alina, I LOVE that Bardugo makes this an issue in this series. I love the Bardugo is willing to go there, to mess with her protagonist THAT MUCH.

Alina's change in conjunction to her increasing power also affects her relationship with Mal. Ah, yes, I have reached the romance. Alina and Mal are a couple, but as Alina grows stronger as a Sun Summoner, the pair seems to grow apart. Mal doesn't belong in Alina's world, but he belongs with Alina. Conundrum, no? But Alina's power, her role, her alliance with Sturmhond, it takes a toll on Mal. Their relationship is highly tested in this book, and I can't wait to see how Bardugo concludes the romance in this series.

In Shadow and Bone, one of the things I hated was that there was potential for a love triangle between Alina, Mal, and the Darkling. I didn't really see the Darkling as a love interest in book one, nor do I see him as one in this book. Now, there is another male in THIS book that could be a part of the love triangle, but I doubt it. We'll see.

I mentioned Sturmhond once? He's the privateer, and he is EASILY my favorite character of this book, and of the series. There are other fabulous characters introduced in this book, such as Toyla and Tamar, but STURMHOND. He is fabulous! He is so much more than a greedy privateer, as we find out in this book (not telling!). I really he gets what he wants, and that things work out for him. Hugs for you, Sturmhond!

Overall, I must say that this book is stunning. I could kick myself for waiting so long to read it, but at the same time, it means that I have to wait less to read Ruin and Rising! I cannot wait to see it all ends.

There wasn't much that I didn't like about this book. As usual, I must say that no book is perfect. HOWEVER, I honestly cannot think of anything in particular that I did not enjoy. It's quite long, and I admit, I did skim a few times, but not often enough that it was annoying, or that I didn't understand something.

This one is getting four stars, not five stars, because this isn't a favorite book of mine, and it didn't blow me away. Granted, favorite books aren't the only books that get five stars from me. Books that are incredible amazing and totally worth the buy get five stars. I really enjoyed this one, but I'm not overcome with emotion or anything. I don't think I'm a hardcore fan like some bloggers/readers, but I am totally invested enough to read the next book.

I would definitely recommend this book to anyone who read the first book. I was blown away by the first book, and I was nothing short of impressed with this book. I would also recommend this series in general. The debut was amazing, the sequel was astonishingly awesome, and I'm quite sure the conclusion to this trilogy will not disappoint!

4 stars. I can't believe I waited this long to read this book! But you all know my fear of sequels. As I continue to learn, some sequels just aren't that scary!