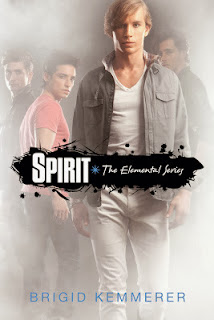 With power comes enemies. Lots of them.

Hunter Garrity just wants to be left alone. He’s learned the hard way that his unusual abilities come at a price. And he can’t seem to afford any allies.

He’s up to his neck in hostiles. His grandfather, spoiling for a fight. The Merrick brothers, who think he ratted them out. Calla, the scheming psycho who wants to use him as bait.

Then there’s Kate Sullivan, the new girl at school. She’s not hostile. She’s bold. Funny. Hot. But she’s got an agenda, too.

With supposedly secret powers rippling to the surface everywhere around him, Hunter knows something ugly is about to go down. But finding out what means he’ll have to find someone he can trust…

Shame on me for not reading this book sooner. Shame on me. I've had an ARC of this book since like, early winter 2013 (March ish?), and then I bought a copy (and had it signed, yay) at the Baltimore Book Festival, when I met Brigid Kemmerer and Jennifer L. Armentrout and Diana Peterfreund, and a few other Young Adult (and some adult) authors. Why did I wait so long to read this book?!

Well, no matter. I finally read it, and LOVED it. I couldn't have a brand-new, freshly signed book not get read eventually. And, I have Secret for review. Though these books can be read as standalones, I hate reading books out of order, or skipping books in series. So, I read Spirit.

This book deals with Hunter Garrity, the Fifth who did not kill the Merricks. He doesn't have it easy: his grandparents don't want him to live with them. His mother doesn't seem to care. Calla Dean is making things difficult at school. And the new girl, Kate Sullivan, has his interest, though he knows she is up to something. All the while, Hunter suspects that the Guides are coming (or already there), and everyone is at risk.

This book was a bit of a roller-coaster for me - very up and down. The plot is definitely engaging, as Kemmerer never stopped with the action and high stakes and twists. I felt like I was navigating a labyrinth while reading this book - every time I thought I had things figured out, I was wrong, because Kemmerer kept the curveballs coming.

One of the things I loved about this book was the way Kemmerer makes readers FEEL. You hear the phrase "all the feels" a lot in the YA community, but for me, very few books actually make me think, "FEELS!". This book, and the other books in this series, have a way of twisting up my emotions and grabbing hold of my heart. Hunter's pain was my pain - I could FEEL his angst, sorrow, bitterness, etc. Somehow, Kemmerer has a way of writing that goes straight to the heart. You can't NOT fall in love with the Merrick boys, or feel bad for Hunter, after reading their stories.

Maybe it's because Kemmerer likes to throw them around a lot. Or maybe because Kemmerer has a way of making things REAL for her characters. It's so powerful, and I don't understand how she does it, but I love it. Also, the voice of the characters is very teenager-esque. I don't know how she pulls off the authenticity, but she does. And I would know all about teenagers, since I am one, and I'm in college.

The romance in this book wasn't my favorite thing, but I didn't have significant problems with the romance itself. My problem was that I really didn't care for Kate, and if you don't like one of the two people, then there is a problem. Hunter, I really liked. It's funny - I kind of hated him in book one. From book two, I was on the fence. This book totally changed my mind. He deserved so much better at times - although at other times, he really was totally asking for it.

But I wasn't a huge fan of Kate. She was kind of shady the entire book, and I was not sold on the romance. But that's okay, because overall, this book was awesome. The ending kind of broke my heart, but it was a fitting ending. Kemmerer knows how to toy with her characters!

Like I said before, I wasn't sold on the romance, and I did not really like Kate. I'm sad about a certain thing that happened to her, but it made sense with the story. The romance between her and Hunter is slow and progressive, but to me, I just wasn't feeling it. In the previous two books, I LOVED the relationships featured (especially Chris and Becca's), but I feel like Hunter and Kate's relationship didn't resonate as well as the previous ones did. But that's just me.

And the plot being a roller-coaster, with the ups and downs. For the most part, it was filled with ups, but the occasional down had me putting the book down or rolling my eyes. Nothing that would make me not finish this book, or even think about not finishing the book.

I highly recommend this series, especially to paranormal fans, or paranormal romance fans. Each book can be read as a standalone, which is really great, because I hadn't read Spark or Storm in quite some time. I admit, I miss reading about Chris and Becca, but I love that each Merrick boy and Hunter will get their own story.

So, if you like series that feature companion novels rather than sequential novels, then this is the series for you! The series plot does require you to understand what happens in each novel, but Kemmerer takes care of that, by including snippets of information of key events that happened in the previous novels. Win!

4 stars. I am super excited to read Secret! And then Sacrifice. Brigid Kemmerer works magic! Squee!