Review: Be With Me by J. Lynn 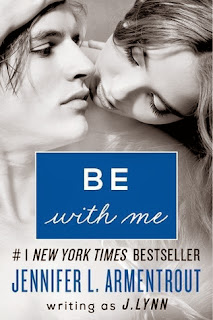 Be With Me by J. Lynn
Book Two of the Wait For You series
Publisher: William Morrow
Publication Date: February 4, 2014
Rating: 4 stars
Source: eARC from Edelweiss

Teresa Hamilton is having a rough year—she’s in love with her big brother’s best friend, but he hasn't spoken to her since they shared a truly amazing, mind-blowing, change-your-life kiss. She got out of a terrible relationship. And now an injury is threatening to end her dance career for good. It’s time for Plan B – college. And maybe a chance to convince Jase that what they have together is real.

Jase Winstead has a huge secret that he’s not telling anyone. Especially not his best friend’s incredibly beautiful sister. Even though he and Teresa shared the hottest kiss of his life, he knows that his responsibilities must take priority. He certainly doesn't have time for a relationship. But it doesn't help that all he can think about kissing the one girl who could ruin everything for him.

You all remember me and Wait For You, right? That book and I did NOT get along - I professionally ripped that book apart, back in March. I didn't know if I wanted to continue reading this series - after that book, it didn't seem likely.

So why did I request Trust In Me? And Be With Me? There was a tiny part of me that said, give the books a chance. Well, I ended up liking Trust In Me a little more than I liked Wait For You. And clearly, I liked Be With Me more than the other two mentioned. So, I'm glad I kept reading. Sometimes, you need to give books (and people...) second chances. There's a life lesson, people!

Anyway. This book is in Teresa's point-of-view, Teresa being Cam's sister. Teresa has been in love with Jase, Cam's best friend, for quite some time. There was that one night when they kissed, but nothing happened besides that. But as Teresa and Jase begin to see more of each other (mysterious, isn't it), things seem to change. As Teresa deals with an injury, her roommate, and her feelings for Jase, she finds out Jase's life is a lot more complex than she thought, and that he is willing to give her up to keep her out of his mess.

Well. Thank GOODNESS this book doesn't feature 90% of the usual New Adult contemporary romance tropes. Like, you know. The innocent heroine, the traumatic rape or near-rape experience, the overly alpha, macho hero with a terrible terrible past, the steamy romance (despite the fact that the heroine is innocent to such things), the reform of the bad boy hero, because you know, any woman can change a man ANYTIME.

Well, these tropes weren't in this book, for the most part. Jase isn't a crazy alpha male cracked on too much testosterone. Teresa... well, she did have a traumatic past, but it's different than rape, which is more original (thank goodness). The romance and chemistry is steamy, but remember, these two have a past, a history of feelings for each other. Also, neither of them are virgins or even close.  Yes, Teresa is a little on the shy side, but she's not a blushing maiden or anything. And Jase does have a past, but it's not terrible. It's ACTUALLY something of consequence, in my opinion. He didn't beat up anyone, or kill anyone, or show off his macho-ness which is disguised as a "terrible past".

So, this book didn't feel as bad, in terms of it being a New Adult contemporary romance novel. It was a lot more original than its predecessor, and more original than most New Adult contemporary romance novels. If it weren't, the rating of this book would have tanked (for me), and we'd have a repeat review of Wait For You. You all KNOW that I do not mess around with repetitiveness and unoriginal content. I also am not afraid to give 1- and 2-star ratings left and right.

So, Teresa. If you remember from book one, Teresa was abused by a boyfriend a few years before, and that was the source of Cam's "terrible past" - because he almost killed the boyfriend. Teresa has a knee injury, and cannot dance (which is her passion). Throughout this book, Lynn throws obstacle after obstacle at Teresa HERSELF - not just at the couple (Teresa and Jase). Teresa has to live and grow on her own, and not just with Jase.

Jase has a past, and it's pretty serious, but it's not awful or scary or anything like we expect from most New Adult contemporary romance heroes. It IS a lot to deal with, and Jase is completely justified, in that he did not want to be close to another girl, and that he pushed away Teresa. It makes sense, and I don't think he was being stupid at all. He's responsible for so much, whereas in Wait For You, Avery was responsible for what? Herself, and herself alone. She was the one who didn't want to pick herself back up and grow a spine.

Whatever. Moving on to the romance. The romance is really sweet, between Jase and Teresa. I really, really like Jase, and for the most part, I like Teresa. Teresa has more backbone than Avery, which is nice. Jase is not as much of an alpha male as Cam, which is also nice. Jase and Teresa are a great pair, and they know they are. They seem to do more communicating than shutting the other out - this is GOOD.

Basically, I enjoyed this novel a lot. I'm glad I gave this series another chance. I'm excited to read Stay With Me - the couple will be one that we haven't seen much of in the entire series, but this is great, because we have very little background on them. Excited!

There wasn't much that I didn't like, but this book is still getting fours stars. It's not a new favorite (or anywhere close), but I really enjoyed it, and I think it's a very well written story.

I do have a complaint in general, about Lynn/Armentrout's heroines. They all seem to be the same heroine. Like, they all sound the same, they have the same voice, the same somewhat feisty attitude that is often sprinkled with ditsy behaviors, the same smart mouths... there are just too many similarities. I haven't read White Hot Kiss yet (my next read, actually), but I hear she is also fiery and feisty, which is not different than most of Lynn/Armentrout's characters.

Avery in Wait For You seemed to be slightly different - more passive. In this book, she definitely seemed goody two shoes and passive, so I suppose that's a difference. But in Wait For You, occasionally, she seemed just like any other heroine of Lynn/Armentrout's. I'm still waiting to read a book with a different type of heroine than the ones I've seen.

The same could go for the males as well. They're all cocky, arrogant, good-looking, ripped, dirty-talking, sinful, etc. Hmm...

4 stars. I'm happy to say that I enjoyed this book more than I enjoyed Wait For You, and even Trust In Me! That's a nice feeling - when you give a series another chance, and it works in your favor. YAY!