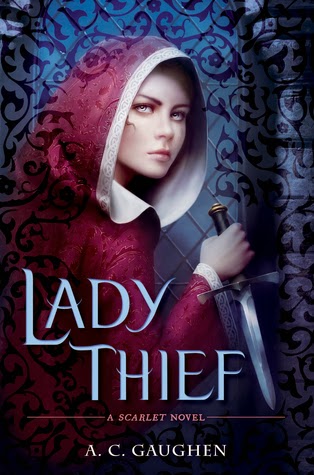 I read Scarlet almost two years ago. It ended pretty well, and honestly, I didn't really think there would be a sequel or more books to the series. I mean, there was definitely room for more, but I was content with what I read. So, when I saw that there would be two more books, I was ECSTATIC! I couldn't believe it! More historical fiction novels with pretty covers - win!

This book picks up where Scarlet left off, sort of. Rob is having awful nightmares from the awful physical and mental torture that occurred in book one. Scarlet is doing her best to avoid Gisbourne - which is no longer possible, because he offers her a deal: come live with him in the royal court when Prince John arrives, and when Prince John leaves, Gisbourne will annul the marriage between him and Scarlet.

Nothing is easy for Scarlet or Rob in this book. Gaughen gives these two no breathing room, cuts them no slack, catches them no break. Or whatever. You get what I'm saying. It seems like Gaughen is torturing Scarlet sometimes. Scarlet goes back to Gisbourne, hoping for the annulment, but sometimes it seems like she won't survive. She gets badly injured by several members of the court, which is so not fair. I suppose it's good to show the injustice of the court and whatnot, but it was too much.

I like how the romance in this book was clear-cut and separated. In Scarlet, there was a very obvious love triangle, and that was probably the only thing I didn't like about the book. In this book, roles and relationships are clear: Rob and Scarlet, John and Bess, prince and princess, Gisbourne and no one. Good.

I'd say I enjoyed the ride, but that wasn't always the case. See below for more about this book, the things that I did not enjoy. Many things that I would usually feature in this section are among them.

The plot. The pacing. The romance. The characters. The ending. There were many things about this book with which I was not pleased. Maybe I expected too much from this book. Maybe it had been so long since I read Scarlet, and because of this, I might not have liked Scarlet as much as I thought I had. Who knows. My point is, the bad basically outweighed the good, for me.

The plot was practically nonexistent. I mean, there was a plot, but I couldn't quite figure out what it was. Road to the annulment? Road to choosing a sheriff? I feel like the plot was all over the place, and therefore, it made the book lack a plot. And it dragged ON and ON. Most of it was Scarlet getting injured or purposely hurt by others. Sorry, but I don't really care to read that. Where is all the kickbutt action from book one?

So, the pacing was sort of just BAD. This book moved at a snail's pace. And it's a very short book, so it felt like not much happened, especially since the pacing was so slow. I feel like NOTHING happened (aside from Scarlet getting beat up by everyone). Things don't really start happening until the last 30%, and by then, I was like, REALLY. What happened to the other 70%?!

The romance was significant in that I feel like every time Rob and Scarlet were together, they were kissing. And touching. And kissing some more. It felt SO FAKE. And OVERDONE. Like, I did NOT want to read about them kissing all the time, despite how much I love chemistry (and romance). Every time they had a conversation, it led to, we'll be together, and I love you, and, don't give up, and, insert mushy gushy blubbering here. NO. It did NOT work in Gaughen's favor, in this case.

And the characters, ohhh, the characters. Rob feels so one-dimensional in this book. he doesn't seem to have any depth to him at all. Give him nightmares? Make him hurt people and feel guilty about it? Those things did NOT make him seem human, or like a real human. He was flat and unchanging and his only role seemed to be Scarlet's doormat. Like, let me bend over backwards and chop off all my limbs for you. Usually, I'd be like awww, that's true love right there, but in this case, if felt distant and fake. Rob seems like a robot, not a love interest. And shouldn't he be more than a love interest?! He's ROBIN HOOD. Who cares about Scarlet when history remembers Robin Hood? Ugh.

And Scarlet herself pissed me off. She seems weak and insecure and did I mention weak? I know that physically, she is weakened. Not sure why Gaughen did that - I really don't see the purpose. Scarlet is already at a disadvantage at court - why inhibit her physically? I don't get it, but anyway. Scarlet seems so weak mentally. She lets everyone else fight her battles, and in the end, the annulment isn't won by HER. She's so stupid too - why would you trust Gisbourne to give you an annulment in the first place?! Why would he want that, when the marriage between him and Scarlet benefits him? Why not just live with Rob - in sin, if you please. If that's what you want, then do it.

The ending was SUCH BULLS***. Pardon my language, except don't. What's the easiest way to get your characters out of trouble? Invent something about their birth! Better yet - magically make them have a high rank in society/the court! I won't say which character (or characters) experiences this fate, but Gaughen seriously took the easy way out. I could not help but roll my eyes and grit my teeth when I read about Eleanor and Scarlet. What. The. Heck. SUCH bulls***, if you ask me. Gaughen couldn't think of another way to patch that hole?! Unbelievable.

I'm not sorry that I read this book. I was thrilled to be given the chance to review the sequel of a book that I loved. And I will read the third book. But this one was such a disappointment. Sequel slump ran rampant in this book.

Ehh. I'm not going to say no, because fans of Scarlet (like me) will want to read this one no matter what. To new readers: Scarlet was so amazing - it blew me away and reinforced my love of Robin Hood retellings. HOWEVER. Lady Thief, in my opinion, did not live up to the standards of Scarlet, fell short of my expectations, and was not nearly as good as I had expected.

1.5 stars -> rounded up to 2 stars. I didn't absolutely hate this book, but I certainly didn't love it. I am interested in reading the final novel in this series, for whatever reason. I need closure.