Welcome to the Landry Park tour! I am super excited to be a part of this wonderful tour! Be sure to read my review, and enter the awesome giveaway! Enjoy and good luck! 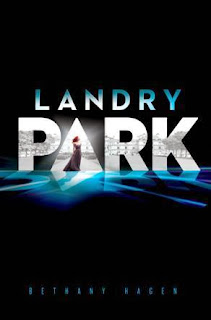 In a fragmented future United States ruled by the lavish gentry, seventeen-year-old Madeline Landry dreams of going to the university. Unfortunately, gentry decorum and her domineering father won't allow that. Madeline must marry, like a good Landry woman, and run the family estate. But her world is turned upside down when she discovers the devastating consequences her lifestyle is having on those less fortunate. As Madeline begins to question everything she has ever learned, she finds herself increasingly drawn to handsome, beguiling David Dana. Soon, rumors of war and rebellion start to spread, and Madeline finds herself and David at the center of it all. Ultimately, she must make a choice between duty - her family and the estate she loves dearly - and desire.

Oh, what a novel! I read this book in one shot, and I simply loved it. It's a mix of several genres, and I think the blend really works. I don't really know what I was expecting from this novel, but I was blown away with what I got!

Madeline is the sole heir of Landry Park - which means that she has to marry rich, she can't go to the university, and she doesn't get a say in, well, anything. Several eligible bachelors arrive, including one very handsome and charismatic David Dana. But everything seems to unravel after one fateful event - the attack of a gentry lady. The gentry believe that the Rootless are behind the attack - the Rootless being basically the poor class of people who deal with the nuclear radiation to power the lamps that saved the environment (designed by one Jacob Landry, Madeline really great grandfather).

So, it seems like your typical dystopia novel - in which there are the "rulers" (the gentry, who are rich and powerful), and the "enslaved" (the Rootless, who are powerless and poor, but numerous and angry). There is an incident (the attack), and soon Madeline much choose.

The thing about Madeline was that she already had preconceived notions about the Rootless. She felt sorry for them, and wasn't all that suckered to the gentry (even though she is one). The incident with the gentry lady (who happened to be a peer of Madeline's) piqued Madeline's curiosity, because Madeline didn't think it was the Rootless.

Nevertheless, the Rootless were blamed, and sides had to be taken. Madeline learns key things about several people, including the Rootless themselves. I really liked watching Madeline grow as a character. She didn't become a full-out revolutionary, which I thought was authentic. She helped as best she could, while still being gentry. Hagen emphasized that Madeline (and other characters) are still human, still gentry, and still enjoy their rich, opulent lives.

The plot of this book sounds straightforward, but it wasn't. I loved how Hagen kept twisting the story - both stories. The love story wasn't simple, and the revolution story wasn't that simple. Things weren't as predictable as they might seem on the surface.

The romance. It makes me sad, but the romance isn't clear-cut. YES, this is a GOOD thing, but I was rooting for David and Madeline, and things just didn't go their way ALL THE TIME. The romance seems really doomed at first, but read until the end - things start to look up. I just *knew* Hagen couldn't do that to the characters or the readers. Or could she...

Well, no matter, I hope that the series continues to be amazing! And the romance builds beautifully. I have a feeling that David and Madeline could be quite the couple, given the chance! I hope to see more of them in book two. And more of everything good I saw in this book! What a lovely start to a new series.

There wasn't much I didn't like - maybe just the romance. I could have sworn a love triangle was going to break out (in which I would have been extremely upset), but once I got to the end, I saw that that was not going to happen. Just read the entire book, don't jump to conclusions.

I would have liked to see more interactions between David and Madeline. It seemed like they were always arguing to fighting or not speaking to each other. Maybe start the next book with their relationship taking a softer turn? But I can't complain too much.

I most certainly would! This is a really fantastic novel with blends of many different genres - futuristic, dystopian (sort of), romance. I love the world that Hagen has created, the characters, the story, and I cannot wait for more! This one doesn't have the most straightforward romance, so don't expect too much, but it has a wonderful story and creative worldbuilding. I recommend it to any YA lover!

4 stars. You really do NOT want to miss this debut novel! I will definitely be looking out for the sequel.

Librarian by day, Bethany Hagen is the author of the forthcoming LANDRY PARK, set to be released from Dial February 4th, 2014. She lives in Kansas City with her husband and two children.