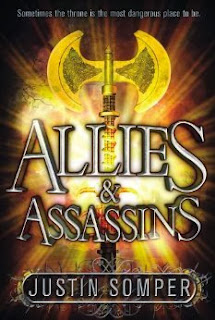 Prince Anders, the ruler of Archenfield, has been murdered, leaving his younger brother, Jared, to ascend the throne. Sixteen-year-old Jared feels unprepared to rule the kingdom and its powerful and dangerous court, yet he knows he can rely on the twelve officers of the court to advise him. He also knows he can just as easily be at their mercy-especially when it appears that one of them may be responsible for his brother's death. Unable to trust anyone, Jared takes it upon himself to hunt down his brother's killer-but the killer may be hunting him, as well. Murder, betrayal, and intrigue abound in Justin Somper's thrilling YA series debut. Exploring the political machinations of the medieval court and the lives that hang in the balance, Allies & Assassins is a gripping tale of a teen torn between duty and revenge.

I haven't read Somper's Vampirates series, or any of his other books, but this one sounds EPIC.
Posted by Alyssa at 12:00 AM