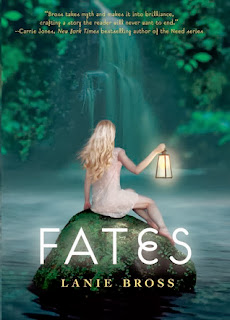 One moment. One foolish desire. One mistake. And Corinthe lost everything.

She fell from her tranquil life in Pyralis Terra and found herself exiled to the human world. Her punishment? To make sure people's fates unfold according to plan. Now, years later, Corinthe has one last assignment: kill Lucas Kaller. His death will be her ticket home.

But for the first time, Corinthe feels a tingle of doubt. It begins as a lump in her throat, then grows toward her heart, and suddenly she feels like she is falling all over again--this time for a boy she knows she can never have. Because it is written: one of them must live, and one of them must die. In a universe where every moment, every second, every fate has already been decided, where does love fit in?

I really, really wanted to like this book. It was a highly anticipated read for me, and when I received a review copy, I was ECSTATIC. There is nothing like getting one of your most anticipated reads really early, right? Or at all, to be honest. Nevertheless, I was heavily disappointed by this book.

Basically, Corinthe needs to kill Lucas, in order to restore the balance of the world. She is an Executor, sort of like a Grim Reaper who doesn't necessary kill, but this was her first kill mission (it's rare for her to be asked to kill directly). Everything does not go according to plan when she not only fails to kill him, but sends him through a gateway, and then falls in love with him.

I liked the writing style of this novel. It's very lyrical and descriptive, which was both good and bad. In the beginning, I thought it was gorgeous. Eventually, I got tired of reading the descriptions, and started skimming. That's bad.

Oh and no love triangle. That's ALWAYS a plus.

I can't think of any more positive comments.

Where to begin. I had so many problems with this book, but I really wanted to like this book, so I feel like while I was reading, I was trying to make excuses, so I would hopefully enjoy the book. That never really happened, which was unfortunate. The book was confusing and a bit dry, the romance was cliche and rushed, the plot was weird... I don't even know about characters or the character development.

My biggest problem was confusion. I was confusion pretty much from start to finish, which is never a good sign. I didn't understand what was happening in the beginning of the book, yet I held on to the hope that all would be revealed and explained by the end of the book. I don't know if things actually WERE revealed and explained by the end - if they were, then I completely missed those explanations (which is doubtful, because I'm a careful reader, even when I skim). So, things just didn't make sense.

Like, I still don't get exactly what Corinthe is and was. An Executor, a Fate, okay, but what are those things? What do they do? Where are they from? Describe that place - Pyralis? What is the Crossroad? The gateways? Where did Lucas end up when he went through the gateway initially? Where are all of those worlds? I don't understand and I hate being confused!

The setting was the WORST. After Lucas and Corinthe go through the gateway, they go from world to world (or what I'm assuming are different worlds). But that's just it! I don't know where they ended up! It wasn't Pyralis, Corinthe's old home, and it wasn't modern day human world. It was other places, but at one point the setting kept changing paragraph after paragraph, and I couldn't figure it out. Are they in a vortex or something? Is the Crossroad some sort of portal? Ugh.

I mentioned that I liked the writing style... which I did, but eventually, it just started to seem dry. The story didn't seem to have any life to it, and it was because of the writing style sometimes. I started skimming when I saw long paragraphs of descriptiveness coming, because they weren't helpful, they didn't help procure images in my head, and I was getting bored fast. Not that I was ever SUPER bored in this book, but seriously, the tone AND mood of this book is dry. Lifeless.

The romance is cliche, in my opinion. I have to kill you... but wait, I fell in love with you. Oops! And then when the reason for their instant connection is explained, I was like *roll eyes*. And yes, there is that connection, but from the beginning, their relationship seemed insta-love-based. I so wanted to like Lucas and Corinthe together, but it was based on nothing. There were hardly any interactions between them up until a certain point, in which Corinthe is still bent on killing Lucas. The romance seems forced and rushed. Boo.

I don't even know how to comment on the characters of Corinthe and Lucas. They seemed so flat to me. I didn't relate to either of them, although I could feel myself wanting to do so. Like, I wanted to feel Corinthe's plight over having to kill Lucas, but it didn't seem real on her, so that feeling didn't translate over to me. Does that make sense? And the characters didn't change much, from beginning to end. I can't even say much about character development because I really didn't see any in motion.

Overall, this was a poor start to a series. Confusion is not the way to go, my friends. Don't leave readers completely in the dark like though... or think that you're explaining things when you're not. It does not work in your favor. I struggled with this book (even though it actually was a really quick read).

Err, not really. I was so excited to read this book, and it was a total letdown for me. I wish I could say, yeah, totally READ IT! But this book was not what I expected or wanted. I ended up being more confused than anything else, and disinterested. It's unfortunate, but it happens!

2 stars. I really, really wish this book could have turned out differently for me. Unfortunately, that was not the case. I might still read the sequel though.