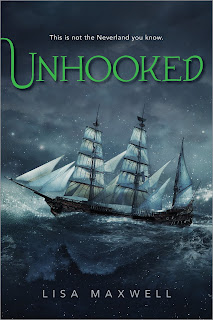 For as long as she can remember, Gwendolyn Allister has never had a place to call home—all because her mother believes that monsters are hunting them. Now these delusions have brought them to London, far from the life Gwen had finally started to build for herself. The only saving grace is her best friend, Olivia, who’s coming with them for the summer.

But when Gwen and Olivia are kidnapped by shadowy creatures and taken to a world of flesh-eating sea hags and dangerous Fey, Gwen realizes her mom might have been sane all along.

The world Gwen finds herself in is called Neverland, yet it’s nothing like the stories. Here, good and evil lose their meaning and memories slip like water through her fingers. As Gwen struggles to remember where she came from and find a way home, she must choose between trusting the charming fairy-tale hero who says all the right things and the roguish young pirate who promises to keep her safe.

With time running out and her enemies closing in, Gwen is forced to face the truths she’s been hiding from all along. But will she be able to save Neverland without losing herself?

I've never read any kind of Peter Pan retelling - and if I'm honest, I've not read Peter Pan, nor seen the movie. Whoops? I've never had a ton of interest in the story! But trust me, I know enough about it to understand the "retelling" aspects of this book. A job well done by Maxwell! This is my first book I've read by her and I REALLY enjoyed it!

Gwen is used to moving from place to place, at the whim of her mother's crazy hallucinations. This time, it's to London, but Gwen's friend Olivia is coming to stay with them for a bit. But their first night at the flat doesn't go as planned - Gwen is kidnapped and transported by monsters to a place she has never seen before or heard about - which turns out to be Neverland. Aboard a ship captained by a roguish pirate, Gwen is desperate to figure out what is going on - as well as to find Olivia and get back to London. But Neverland is full of dangerous secrets, lies, and perils - this isn't like the story Gwen knows at all.

The beginning of this was a tad bit slow - but as soon as Gwen is taken into Neverland, I was hooked (hehehe, see what I did there?). I could not read this book fast enough! Like I said, I've not read Peter Pan or watched the movie or read any retelling, but I could tell immediately that this retelling was different. So many things are upside down! Peter Pan isn't a good guy; Tinker Bell isn't a cute fairy; the Lost Boys are, well, lost, but also a bit bloodthirsty.

Gwen is such a mentally and emotionally strong heroine! She doesn't panic and freak out when she comes to understand that she's in Neverland, far far away from London. She goes toe to toe with the Captain, never backing down, always trying to find out more. She's persistent and never stops trying to remember her home, to find a way to get out, to get to Olivia.

Captain Hook is my favorite character of this book. The Captain is young, a few years older than Gwen, but he is hardened and wicked and very much a roguish pirate. He saves Gwen from drowning (which is how she ended up on his ship upon waking up in Neverland). The Captain has this innate charm to him, almost seductive, but not in a manipulative way. There are so many scenes with him and Gwen that made me swoon and reread and pause and reread again. Walk the plank scene. GUYS. That's my favorite scene. Chilling yet so, so swoony (weird combination, I know).

The story reads so quickly! Once we're in Neverland (which was very quickly into the book, maybe within 10%), the story takes off. Gwen needs to find Olivia and they need to get out. Gwen isn't sure why she or Olivia was taken, until she overhears a conversation and sees some information. She meets this fairy shortly after, who takes her to Olivia. And then things fall apart.

Despite what the synopsis might lead you to believe, there is NO LOVE TRIANGLE in this book. None. I promise you. Gwen falls for one guy... the other one is a manipulative bastard who never touched her, mind or body. I didn't like that the synopsis is so misleading, but then, I can see why the publisher would construct it as such. THERE IS NO LOVE TRIANGLE THOUGH. The author makes it very obvious, in terms of who is the (one) love interest, and who is being manipulative. Gwen doesn't fall for anyone's tricks at any point, try as one boy might.

I loooove the romance. The Captain and Gwen have such a fiery, passionate relationship; every interaction between the two of them have some charged tension to it. I swooned just about every time they were in the same room. There is a percentage of the book that doesn't involve the two of them together - but when they come back together, it's like lightning! More sizzly tension.

The climax of this book had me biting my nails! I had NO idea what would happen at the end of the book, especially given the amount of foreshadowing that the author set in place about one particular aspect of the book. HOWEVER. I am pleased to say that I loved the ending. It was perfect - especially the epilogue!

Overall, I absolutely LOVED this book. I can't even believe how much I enjoyed it! I was very apprehensive because of the synopsis (with the insinuated love triangle in the synopsis), but I was excited about pirates and charm lads and Neverland. No love triangle and our pirate was very charming and wicked and Neverland was craaaazy - this book was great! What in the world was I worried about?!

There wasn't anything in this book that REALLY bothered me enough to say that I'm taking away a star because of this or that. I wish the synopsis didn't insinuate a love triangle - but that's not the author's fault. I hated Peter Pan because he's soooo manipulative - but I think that was the point. The ending glossed over a few details that I questioned, but I was so relieved about other aspects, I didn't question those too much. The ending was lovely!

I so recommend this book! Readers of any genre in YA would love it! Pirates! Roguish captain! Insane storybook world that is trying to kill everyone! Hidden talents! Swoon swoon swoony romance! And it's a standalone and ends so well - this book made me smile so much.

4.5 stars. I'm rounding down to 4 stars but it's a strong 4.5-star rating. You should give this book a shot! Even if you're like me, who has never read or watched Peter Pan ANYTHING. Also no love triangle. Also swoony roguish pirate who charmed me from the start and can take me on his ship any day. Guys. You want this book! It's worth the wait!