Review: Crashed Out by Tessa Bailey 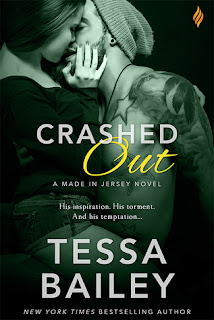 Crashed Out by Tessa Bailey
Book One of the Made in Jersey series
Publisher: Brazen
Publication Date: December 7, 2015
Rating: 4 stars
Source: eARC from NetGalley

His inspiration. His torment. And his temptation...

Jasmine Taveras is the reason Sarge Purcell grabbed his six-string and bailed the hell out of New Jersey four years ago. She's the fuel for every song he's ever written-each one laced with bitter, hard-edged, hungry lust. Now, with his hugely successful band is on temporary hiatus, Sarge is determined to prove to Jasmine that this "kid" turned into every inch the man she's always needed...

Men are slim pickings for a single factory girl in Hook, New Jersey...until tall, broad-shouldered hotness walks-or rather storms-into Jasmine's life. Sarge's return shouldn't affect her this way. He's her best friend's much younger kid brother, and the kind of rough, gritty, sexiness Jasmine has no right to taste for herself. Even if he lets her.

WOAH this book was not what I expected. I mean, you have to expect certain things from Tessa Bailey if you've read any of her books before. Smoking hot chemistry. On-fire sex. Spunky ladies and cocky males who aren't a**holes. But this book... this book is probably tied for my favorite Bailey book (Officer Off Limits is still one of my favorite Brazen novels ever). Crashed Out might be Bailey's hottest book yet!

Also, this cover is probably my favorite Brazen cover. No one is particularly naked, and omg beanie dude! Stick a beanie on a guy take his shirt off leave some stubble/5 o'clock shadow and BAM, I am all over that guy. So this cover really worked for me.

At twenty-two, Sarge Purcell is the lead singer and guitarist of a very successful band. With the band on temporary hiatus, Sarge goes home to Hook, New Jersey for the holidays. He hasn't been back in four years, so he hasn't seen his sister River, his three-year-old niece Marcy... or Jasmine, his sister's best friend and the reason for every song he's written  When Sarge shows up in Hook, Jasmine is surprised by how much he's grown... and how much he now affects her. The attraction between them is practically combustible, but Jasmine knows that he isn't here to stay. But that doesn't stop them from engaging in some steamy encounters...

I. Love. Sarge. He's twenty-two, seven years younger than Jasmine, and he's always idolized Jasmine. He's been attracted to her for years, but she had no idea. She's River's best friend, and she's always thought of Sarge as River's little brother. Now all grown up (both mentally and physically), Sarge is a threat to Jasmine's composure. He makes her feel feverish, and she makes him sweat. Sarge is a really yummy guy - he's a tiny bit arrogant, with a dirty mouth and a straightforward attitude. He never gives up on going after Jasmine, but he always gives her an out if she doesn't want his attention.

There is also a seriously swoony side to Sarge that I love. He's a musician, so he does sing to her a few times in this book. I'm usually wary of the type of protagonist that is famous, but I think Bailey wrote the archetype well. It didn't really bother me that Sarge was in a really popular band, because all he had been seeing and could see was Jasmine.

Jasmine is twenty-nine going on thirty, quite a bit older than Sarge (especially since technically he's like a boy fresh out of college). She didn't expect to be attracted to the boy she used to babysit. She hates the cougar vibe that she feels, and she's constantly reminding herself that Sarge is so much younger than her, that she's so much older than him. But she can't deny the attraction, and Sarge never fails to leave her more satisfied. Add in his sweet and thoughtful side, and she can't resist him.

I love that Bailey reverses the stigma and has a female who is so much older than the male. I personally DO NOT like these types of stories (call me weird or whatever), but it was great to see how Bailey brought about the romance. As readers, we never forget about the age difference because it constantly bothers Jasmine, despite it not bothering Sarge at all.

The chemistry is SO hot in this book. This might actually be Bailey's steamiest book (and literally all of her books are ridiculously fiery hot). Sarge and Jasmine sizzle off the page (especially Sarge!). I love that their relationship started off so physically but developed into something more. This scared Jasmine, but she quickly realized that Sarge was what (who) she wanted.

I LOVE the climax of this book -- it isn't your typical "breakup" climax! It has significantly less drama, and I LOVED that Jasmine was the one to right wrongs and go after her man. Sarge left the ball in her court, and so Jasmine was the one to decide certain things. I LOVE this. I won't discuss further for fear of something anything but I LOVE the climax of this story.

And the ending was very happy. Overall, I so enjoyed this book. It's definitely one that I'd reread again, and recommend. I've read a number of Bailey books but this is probably my favorite (or tied with Officer Off Limits)!

This isn't quite a dislike BUT, if you don't like stories in which the female is significantly older, this is your "warning": Jasmine is going on thirty, and Sarge is twenty-two. This usually bothers ME, but I absolutely loved how that aspect played a role in the story.

4.5 stars -> rounded down to 4 stars (no particular reason). I am so glad that I gave this book a chance, despite my reservations against it! I pretty must trust Tessa Bailey so I had a good feeling that she would change my mind. I can't wait to read River's book! Gosh her story is so intricate.