Review: Ignite Me by Tahereh Mafi 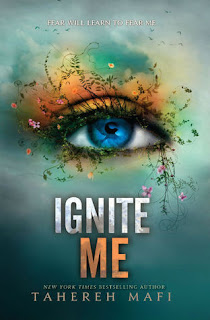 With Omega Point destroyed, Juliette doesn’t know if the rebels, her friends, or even Adam are alive. But that won’t keep her from trying to take down The Reestablishment once and for all. Now she must rely on Warner, the handsome commander of Sector 45. The one person she never thought she could trust. The same person who saved her life. He promises to help Juliette master her powers and save their dying world . . . but that’s not all he wants with her.

The Shatter Me series is perfect for fans who crave action-packed young adult novels with tantalizing romance like Divergent by Veronica Roth, The Hunger Games by Suzanne Collins, and Legend by Marie Lu. Tahereh Mafi has created a captivating and original story that combines the best of dystopian and paranormal, and was praised by Publishers Weekly as “a gripping read from an author who’s not afraid to take risks.” Now this final book brings the series to a shocking and satisfying end.

I know I'm giving this book three stars BUT I actually really liked this book! There was one rather big thing that didn't sit well with me, but overall, I was pleased. I never thought I'd read this series, let alone enjoy it. Overall, this series gets 3.5 stars from me. Thank you, Pili, for recommending the series so much! This is my December Pili-Pushed review.

Omega Point has been destroyed, and the world thinks that Juliette is dead. But she isn't - Warner saved her. With Warner's help, Juliette is determined to find her friends and destroy the Reestablishment, starting with Anderson. The world is changing - and so is Juliette.

I zipped through this book in lightning speed! It picks up right were Unravel Me left off. Juliette has been taken back to the Sector 45 base by Warner, but Warner helps her go back and discover what became of Omega Point and the survivors. Adam, Kenji, James, Lily, Alia, Castle, Winston, Ian, and Brendan made it out alive. But Juliette brings chaos with her, as Adam no longer wants her around.

I'll start with him. I distinctly remember some people being angry about how much of a jerk Adam was in this book, and how they thought Mafi was copping out of the love triangle by making Adam a jerk. Honestly, I thought Mafi did a smooth job of whatever she did with Adam. I found it perfectly reasonable for him to be angry, scared, frustrated, hurt. He lashed out again and again - and it makes sense, because the girl he's been obsessed with broke up with him a month ago, and now she's defending the man who tried to kill him (Warner). I never liked Adam much, but I understand why he acts like a jerk in this book.

Juliette is easily the strongest and most confident in this book, more than she's been throughout the series. Job well done by Mafi, as we can clearly see Juliette's character development. I love how she made clear choices with what she wanted in her future, in terms of the Reestablishment, the rebellion, and the guys.

Warner... Warner has always been my favorite. I KNEW there was more to him than the heartless, cruel crazy person. I had a feeling that there were reasons for everything. I always liked him, but this book made me like him even more. He's this perfect, handsome, polished specimen of a male, and he's also got this personality that is thoughtful. And fashion-oriented. I like him.

I won't say too much about what goes down in this book but there is the build-up towards the big climax, and then the finale. I think I expected more (see below), but the book ends in a satisfying (yet slightly abbreviated?) way.

I am VERY pleased with the romance. Of course, I knew before starting the series how the love triangle would end, but it was nice to experience. There are some really steamy scenes in this book - for a YA book. I approve!

Overall, I liked this book! And the series. I'm glad I waited so long though, so the love triangle didn't quite affect my enjoyment of the rest of the story.

The big that I didn't like was how anticlimactic the climax felt. The rising action was... rising, but it didn't quite feel like it was building up to something epic. It felt like there was less action in this book than the other two books.

And then the climax happened. And it felt so boring. It was over in like, twenty pages. I thought the ending was way too quick, and there was no falling action. Also, the way the book ended, in terms of the aftermath, made no sense. OR it would make sense if I could see it in an epilogue. I can't say much without spoiling things, but I wasn't buying the way things ending, the role Juliette took on. The ending IS satisfying, but not realistic.

I HATE love triangles, but I knew the outcome of the series before starting the series. So honestly I would recommend the series if 1) you don't mind love triangles or 2) you find spoilers and know beforehand. Trust me, it makes reading this series SO much easy and more enjoyable! I really enjoyed the series (and WARNER!). I can see why people are raving about Mafi's writing and talent - it shows, in this series! Of course, I'll think twice before reading any of her stuff (or perhaps wait until all the books in the series are published, like I did with this series), but I like the stories she tells!

3.5 stars. I'm rounding down to 3 stars because I found the climax SO anticlimactic and the ending very vague and unrealistic, but I really enjoyed this conclusion novel! Especially the romance. Super swoony and steamy stuff happening, people.