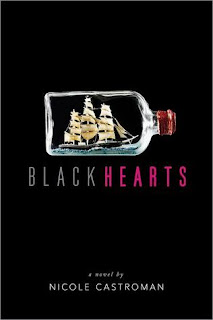 Blackbeard the pirate was known for striking fear in the hearts of the bravest of sailors. But once he was just a young man who dreamed of leaving his rigid life behind to chase adventure in faraway lands. Nothing could stop him—until he met the one girl who would change everything.

Edward "Teach" Drummond, son of one of Bristol's richest merchants, has just returned from a year-long journey on the high seas to find his life in shambles. Betrothed to a girl he doesn’t love and sick of the high society he was born into, Teach dreams only of returning to the vast ocean he’d begun to call home. There's just one problem: convincing his father to let him leave and never come back.

Following her parents' deaths, Anne Barrett is left penniless and soon to be homeless. Though she’s barely worked a day in her life, Anne is forced to take a job as a maid in the home of Master Drummond. Lonely days stretch into weeks, and Anne longs for escape. How will she ever realize her dream of sailing to Curaçao—where her mother was born—when she's stuck in England?

From the moment Teach and Anne meet, they set the world ablaze. Drawn to each other, they’re trapped by society and their own circumstances. Faced with an impossible choice, they must decide to chase their dreams and go, or follow their hearts and stay.

I'm actually kind of mad at this book right now - how dare it end that way! The book was excellent, such a good read, until the ending. Rationally I know I probably should have expected the ending, given Blackbeard's true history, but it still made me bitter. Anyway, the book is REALLY good. The ending is... not.

Anne is a maid in the Drummond household, despite the fact that her father was a merchant. Her mother was a West Indian slave in his household, and so Anne's mixed heritage does her no favors. When Master Drummond's son Edward ("Teach") returns from a year at sea, everything in the Drummond household changes. Teach's engagement progresses, which brings his awful fiancee to the house often. But from the moment Teach and Anne meet, it's like lightning, fire, fate. Teach knows he shouldn't be interested in the help, but Anne seems like more than a maid to him. Anne knows she shouldn't be interested in the master's son, but Teach is so much more than a wealthy man's son...

This book is written in third-person dual POV, switching between Anne and Teach, starting with Anne. This is my favorite type of narration (third-person dual), and Castroman writes it well. I loved seeing the story unfold from both sides. Usually I'll end up loving one character and feeling kind of meh about the other - not the case here!

Anne is a lovely and complex character. She's judged everywhere she goes, because she's of mixed heritage (white father, West Indian mother). She was sent to the Drummond household to work. Anne is the only one of the household who knows who her father was (a rather important man), and so she knows she isn't supposed to be a maid. She longs to be free, to go to the West Indies, to stretch her wings and fly.

Meeting Edward was an experience. Edward "Teach" Drummond is a huge man, well-educated and clever, but also weighed down by his father's expectations. He's expected to marry a baron's daughter, and he's expected never to travel and sail again, after getting married. But meeting a certain maid changed things drastically. I liked Teach's intelligence and his kindness and his persistence.

The story is very much centered around Anne and Teach, as well as Teach's upcoming marriage. I loved seeing the two of them interact, and eventually fall for each other. While I kind of found their relationship to be unrealistic, I did like it. I never liked Teach's fiancee, Patience, and I'm glad she got what she deserved in the end. No love triangle. Cute and sweet romance.

I enjoyed Teach and Anne's mutual struggle for independence, and seeing them grow into what they wanted, rather than what they thought they wanted initially. I loved the climax of this book - finally, wrongs are righted!

But... the ending. Overall, I actually really liked this book. Just the ending really bothered me.

I could look past the unrealistic romance. Teach, a wealthy man's son, magically falling for a maid of mixed heritage? It seems to unlikely, from the late 1600s. He, like everyone else, should be disgusted by her heritage (the prejudice of the time), even if his travels have opened his eyes a little. What did Columbus and Spain and all those colonizing superpowers do to indigenous people (people of color?) Enslave them. Hate them. Think of them as lower than human. So why was Teach different? And why did he treat Anne with kindness? Don't get me wrong, I'm glad he did. But it's unrealistic. If he thought she was so beautiful (which he did), typical males of time who were masters of the house forced themselves on the help.

But anyway. I could stretch my imagination and look past that.

The ending, however, could not be ignored. It's bad. Real bad. Cliffhanger might begin to cover it, except that there are no contracted sequels (or even just one book to follow). This is a standalone. Don't believe me? Read the Rights Report on Publishers Weekly. I also asked the author outright - no contracted sequel. This crushed me. The ending is so painful - especially knowing that there will most likely never be a book to follow.

And if we think it through - historically speaking, Blackbeard had 14 wives. And his ship is called Queen Anne's Revenge. Sooo... some things technically make sense. BUT. This is supposed to be a fictional retelling ISH of the Blackbeard story! Why the cruel ending!? Cruel isn't even a good word for the ending - merciless? Horrible? RUDE? I was not okay. Still not okay.

Heh. This is hard to say. On the one hand, I absolutely loved everything about this book up until the last 10% or so. On the other hand, the last 10% was bad. And "bad" not meaning the author's writing was bad, or it was poorly constructed or written or anything, but bad as in heartbreaking and cruel and unforgivable. I'm one of those readers that needs to be satisfied on one or two counts if you're going to write a standalone... one of those counts was ruined, in this book's ending.

3 stars. All because of the ending. If I knew there was a contracted sequel, this book would get 4 stars. But the author is only contracted for this one book, and she says she has "ideas for another" - meaning she isn't even writing one (and there is no contract for one, so it makes sense). Ugh! I need a good HEA!