Hi bibliovores! Welcome to the 2015 Debut Authors Bash. Today, I'll be hosting Romina Russell, author of Zodiac and Wandering Star! Stick around for my interview with Romina, and a giveaway!

Alyssa: Hi, Romina! Thank you so much for joining me today!

Romina: Thank you so much for hosting me!

Alyssa: How has your debut year been?

Romina: Breathlessly amazing! It feels like I compressed a lifetime’s worth of emotions into a single year, and I had an absolute blast. In particular, I was blown away by the incredible community of YA readers, who have cemented for me that this is what I want to do with my life.

Alyssa: How has the experience been different, as book two’s publication gets closer?

Romina: The second time around feels quieter, yet more intense. Since I’ve been through the publication process once already, I’ve become better at balancing the demands on my time, but since by now ZODIAC already has readers, I feel much more pressure for the sequel to resonate with fans of the series.

Alyssa: Were there any parts of Zodiac that were cut that you wished stayed put? Anything you can share and/or give details without spoiling anything? :)

Romina: Nope—if anything, I actually kept tacking on additional scenes to ZODIAC; hence its heft and height and tiny type! After the first ARC was printed, I added so many extra pages—including wholesale new chapters, like Helios’s Halo and the prologue—that Razorbill decided to print a second ARC, which bears the beautiful current cover art. And I’m still working on getting you a copy of the first ARC (I remember from your blog posts that you loved the original cover colors)! <3

Alyssa: OMG! *squishes* You are awesome! What can we expect from book three?

Romina: ANOTHER AMAZING COVER! Sorry, I had to get that out—I’ve already seen a draft of the book 3 cover, and I know I say this every time, but this one might be my favorite! LOL. Story-wise, we’ll adventure to more Houses and discover new cultures as Rho comes closer than ever to unraveling the mysteries of her universe and the secrets of her past.

Alyssa: I cannot WAIT to see that cover! Razorbill has outdone themselves with these two. And that’s it from me! Thank you for taking the time to be here, Romina. :)

Romina Russell is a Los Angeles based author who originally hails from Buenos Aires, Argentina. As a teen, Romina landed her first writing gig—College She Wrote, a weekly Sunday column for the Miami Herald that was later picked up for national syndication—and she hasn’t stopped writing since. When she’s not working on the ZODIAC series, Romina can be found producing movie trailers, taking photographs, or daydreaming about buying a new drum set. She is a Virgo to the core. 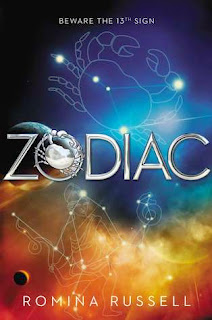