Review: Endure by Sara B. Larson 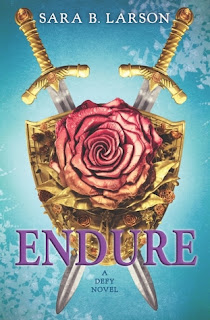 At last, Alexa and King Damian are engaged to be married. But their lives are far from safe. The kingdom of Antion is under siege, and Rylan is a prisoner of the enemy. Even worse, Alexa remains at the mercy of the evil Dansiian Rafe, who controls her mind and can force Alexa to kill or harm Damian at any moment. Despite this, Alexa is determined to rescue Rylan, which soon leads her far from Damian and deep into enemy territory.

When she arrives, what awaits her is deadlier than anything she could have ever imagined: an army of black sorcerers, and a horrifying plot to destroy the world as Alexa knows it. Will she be able to gather the strength to free herself, protect the love of her life, and save the land? Will there ever be true peace?

What a lovely conclusion to this series! I thought Defy and Ignite were pretty good, but this book is probably my favorite. Another series completed! I'll definitely be looking out for more books by Larson in the future. This series is a light, quick trilogy that you could binge-read over a few days, and fall in love with the characters!

Alex has accepted Damian's proposal, but all is not completely well in Antion. Damian has no idea that Rafe can take over her mind at any minute. What's more, Rylan has been taken by Rafe, and Alexa must bring him back. The war against Dansii spreads to Blevon, and the showdown will be as devastating and as epic as expected.

This book wrapped up really well, exactly as a conclusion novel should. It's intense and had me at the edge of my seat at times, but everything is wrapped up by the end of the book. There are deaths, realizations, and new beginnings at the end, and I loved it all.

Alexa shows her strength and her nine lives in this book. She loves Damian with all of her heat, but she is determined to save Rylan. He saved her in Ignite, and he's like a brother to her; she can't leave him to die. Traveling to Dansii proves to be troublesome, and Alexa has to face King Armando of Dansii, Rafe, and the Summoner. I like Alexa's character growth overall, throughout the series. It's pretty brave of her to accept Damian's proposal, to be willing to step into the role of queen. It's even braver that she is willing to lay it all down to save a friend. At first this didn't sit well with me - she would leave Damian?! But then I thought about if my sister were taken - honestly I would totally leave my boyfriend behind to save a sibling or loved one.

Damian is such a sweetie! He carries so much weight on his shoulders, as a young king and newly affianced man. We often see him struggling, trying to make the right decision for Antion, for his people, for Alexa too. He never tries to cage Alexa in, though he always wants to protect her. I respect him so much for not trying to own her or use his title over her - though he'd be within his rights to do so, technically.

I won't say much about the plot but the story had me hooked - I didn't stop reading until the book was over. I was DYING to know what would happen, who would survive, why Alexa was so important to King Armando, etc. Rest assured that all questions are answered by the end of the book!

The ending is bittersweet but also very uplifting. I say bittersweet because there were many, many deaths (seriously, who survived?!), but there is hope for those that survived. I ADORE the epilogue - don't skip ahead and read the ending! Trust me, the ending makes all the pain of this book (and series) worth it!

I remember there were a few things that made me raise an eyebrow while I was reading the book, but I can't specifically remember them and they're not really bothering me anything - I really enjoyed this book. Larson took me through ALL the emotions!

If you've read Defy, or Defy and Ignite, there is no reason not to read Endure! It's an excellent conclusion novel that really makes the characters work for their ending, but there is a good ending. The "body" of Endure's story was thrilling, heart-stopping, and somewhat shocking, and I couldn't read the book fast enough. If you like fantasy, especially fantasy that isn't *too* heavy and reads pretty quickly, give this series a shot!

4 stars. I am so happy with the way this book went, and how the series ended! I can't wait to read more by Larson in the future.