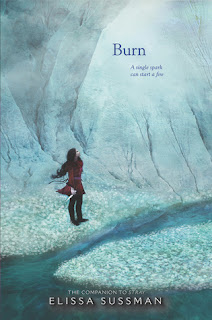 I was so incredibly excited to see that there would be a book to follow Stray, one of my favorite novels of 2014. I remember thinking that while Stray ended well, good enough for a standalone, there was a lot of potential for a companion novel. Burn is a companion sequel - it's told from a different character's POV, but advances the story from where Stray left off. In fact, Aislynn and Thackery are pretty big players in this!

Elanor is finally back in the Mountain with the other Orphans, rebels trying to take down Queen Josetta. There is something off about the Wicked Queen - her huntsmen have been going through different routes, expanding to different areas. Elanor used to be enslaved by the Queen, and there are certain things that she'd rather never remember. Elanor has been haunted by the past for so long. But she and the other Orphans are determined to make the Queen pay for evil - forever.

There was so much incredible depth to this book. Elanor is different from Aislynn (protagonist of Stray), and I loved seeing this completely different heroine. Elanor is totally kickbutt, able to wield a dagger or bows and arrows or ax with incredible ease. She's level-headed and somewhat stoic. We get a look into her past bit by bit, so we're slowly exposed to her story. It's a heartbreaking story in a very different way than you'd think. I really like Elanor and how her character is shaped by her past, as well as how her character grows throughout this book.

Elanor is also dealing with family struggles; her adoptive brother is going to leave the Mountain (which is basically unheard of, among the Orphans) - and their adoptive mother wants to go with him. This breaks Elanor's heart, preparing to lose both members of her family. I love that this book isn't just a fantasy book that deals with an evil queen - family is such a central important part of the story.

And not just for Elanor! A new character, Matthias, joins the Orphans after he is rescued from the Queen's dungeons by Elanor and Rhys (fellow Orphan). Matthias's father gave him to the Queen at a young age, and he rarely ever saw his mother. Matthias is sweet and eager, but also very determined and focused on what he wants. I liked him, even with all the secrets and truths surrounding him. He's an interesting guy, and I'm curious to how his role in the story will grow in the next book (I'm assuming there will be two more books? "Four Sisters" series?).

There are so many secondary characters that I loved and wish I could hug. Rhys, who is a charming sweetie. Wren, whose story is more heartbreaking than Elanor's. Brigid, who is a warrior in her own way. Even the animals, Dagger (a fox) and Cinnamon (a wolf). I love them both!

Stray was known to be an original fairy tale - I'm not sure if Burn is supposed to be another original fairy tale, but I think it's just as lovely and intricate and sweeping as a fairy tale. There is something magical about Sussman's writing, how she constructs this world, how she crafts the story. There is a character's growth and story, but there is also the rest of the world, the secondary characters, etc.

I like that this is a companion sequel! It takes off the pressure a little when the sequel is a companion. You know that the story will continue to progress forward, but in the eyes of another character. We see a lot of Thackery and Aislynn in this book, who are swoony and lovely as ever. I definitely see Thackery as more than a love interest, though I love his relationship with Aislynn!

And the series plot has developed little by little - there is significance to several magic items, and a connection to the Four Sisters. What will happen if someone has all four? Let's hope Elanor, Aislynn, Thackery, and the gang never find out...

There is romance in this book! It's such a sweet romance - I loved the subtle swoon in this book, just like in Stray. I love how empowering some of the scenes were, as well as how romantic others were. I won't say too much on the romance, but rest assured, it's very satisfying... I just wish there was more, especially towards the end.

This book ended well, just like a standalone, really! Which makes sense, since it seems like each book in the series will be a companion that could function as a standalone but also advances the plot really well. No cliffhanger (thank goodness - my last few reads have had cliffhanger after cliffhanger!), no brutal ending. I can't wait to read the next book!

There is one loose thread that was not tied, and it's bothering me a lot. Unfortunately I can't say it here without spoiling a whole bunch of things (literally it's a small sentence but it would unravel so much if I typed it). I want to know more about This Certain Thing, because it didn't get resolve in the end, and it mad me sad. However, it's highly possible that the author will include more resolution to This Certain Thing in future books, just like how we saw so much of Thackery, and Aislynn, from Stray. Right? *rationalizes everything*

I highly recommend this series! I adore the fantasy, the fairy tale, the world that Sussman has created, and the characters especially. There is a beautiful quality to these stories! You don't have to be a fantasy fan to enjoy them. And the books read so quickly!

4.5 stars -> rounded down to 4 stars. Unfortunately that Certain Thing dropped my rating slightly - but I so loved this book. I can't wait to read more!