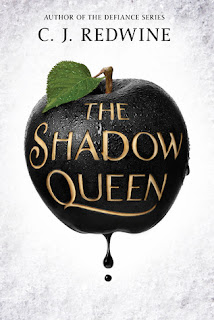 Lorelai Diederich, crown princess and fugitive at large, has one mission: kill the wicked queen who took both the Ravenspire throne and the life of her father. To do that, Lorelai needs to use the one weapon she and Queen Irina have in common—magic. She’ll have to be stronger, faster, and more powerful than Irina, the most dangerous sorceress Ravenspire has ever seen.

In the neighboring kingdom of Eldr, when Prince Kol’s father and older brother are killed by an invading army of magic-wielding ogres, the second-born prince is suddenly given the responsibility of saving his kingdom. To do that, Kol needs magic—and the only way to get it is to make a deal with the queen of Ravenspire, promise to become her personal huntsman…and bring her Lorelai’s heart.

But Lorelai is nothing like Kol expected—beautiful, fierce, and unstoppable—and despite dark magic, Lorelai is drawn in by the passionate and troubled king. Fighting to stay one step ahead of the dragon huntsman—who she likes far more than she should—Lorelai does everything in her power to ruin the wicked queen. But Irina isn’t going down without a fight, and her final move may cost the princess the one thing she still has left to lose.

I adore retellings! Especially fairy tales ones. Redwine's Defiance trilogy is one of my favorite trilogies, and as soon as I saw that she was working on a "fairy tale project", I knew I would love it. This book was delightful to read! I breezed through it so quickly - the pages could not turn fast enough for me!

Lorelai and her younger brother Leo have been hiding from Queen Irina, who killed their father nine years ago, and took the Ravenspire throne. Lorelai is the rightful queen, and she, Leo, and the former captain of the guard have been plotting to take back the throne for Lorelai. Lorelai's magic will be very important in attempting to defeat Irina. In the kingdom of Eldr, Prince Kol is now King Kol, after his father and older brother were killed by ogres. Kol strikes a deal with Irina - banish the magical-wielding ogres, and Kol will bring Lorelai's heart to Irina. But when Kol catches Lorelai, he finds that he cannot do it, and he fights Irina's control over him. Together, the princess and the dragon king could destroy Irina - but Irina is not so easy to kill.

I had no idea that this book had dragons in it! Kol and the people of Eldr are human dragons with two hearts, a human one and a dragon one. Kol is a fierce Draconi warrior who can hunt and catch prey easily - which is why Irina struck the deal with him. Who better to find Lorelai than a master dragon huntsman? Kol is honorable and noble and loyal, but unfortunately, making the deal with Irina gave her control over him. It's with Lorelai's help that he get control back, bit by bit. But Irina has his human heart, so they must destroy Irina not only to restore the Ravenspire, but to get Kol's human heart back.

So I really liked Kol. I also liked Lorelai. She is sweet and kind like Snow White, but she is also very tough and intelligent, analytical and calculating. She does not hesitate to help or heal anyone, and uses her magic in good ways. She isn't a helpful princess by any means! But she's also very kind. I love how she never gave up on Kol, despite Irina's control over him.

The story is very engaging, and I read the book in no time! It's about four hundred pages, but I literally could not stop turning pages. I will say that the first couple of chapters lagged a little, but not enough for me to be bored or starting skimming.

I do love that this book is written in third person POV, occasionally switching between Kol and Lorelai. Both of them are lovely characters to follow, with very different burdens and lives and motives. I liked both of their voices and didn't mind reading from one side or the other.

What's also interesting is that we get Irina's third person POV at times. I love how Redwine digs deep into the heart and soul of all of her characters, including the villain. I didn't hate the queen as much as one might have! Really well written by Redwine.

The romance isn't a make-or-break aspect of this book, and I like how gradual it sweeps through the story. Kol and Lorelai kind of do a 360-degree turn in their relationship - it starts well, gets poor, and then gets better again. I love their interactions, their tenacity, their determination to be good to and for each other. Cute romance and no love triangle!

Overall, I really enjoyed this book! I think the story here is closed - the next book in the series should be a companion novel, I imagine? Set in the same world, but with different characters? I wouldn't mind that! Which fairy tale will Redwine take us through next?

There is one aspect of this book that is bothering me a bit- it's something to do with Lorelai's brother, Leo. I didn't quite like his resolution, at the end of the book. It just wasn't clear, in my opinion. But I think this might be addressed in another novel? I hope I'm right!

I recommend this book! Fantasy fan, retellings fan, Snow White fan, this book is magical and epic and will appeal to anyone who loves a fairy tale. And hey, I'm pretty sure it's a standalone, so it's nice to know that (most) things are resolved. The ending was very resolved, in this story. Hopefully future books are companion novels!

4 stars. I have faith in Redwine's storytelling! This book did not disappoint at all. The retelling aspect was well-written, the magic was larger than life, the characters were so likable, and the romance was sweet! Sign me up for the next book!