Review: Nothing Left to Burn by Patty Blount 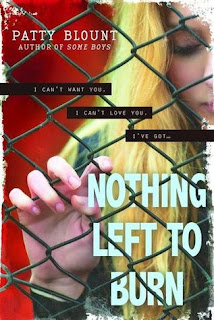 Reece’s father hasn’t spoken to him since the car wreck that killed Reece’s brother. Desperate for forgiveness, Reece joins the Junior Cadet program at his dad’s firehouse. But the program is grueling, and Reece isn’t sure he can make it through. Then he meets Amanda.

Amanda understands wanting to belong. As a foster kid, the firehouse is the only place that feels like home. She agrees to help Reece, but falling for him wasn’t part of the deal. And when a string of arsons suddenly point to Amanda, their relationship could go up in flames.

Reece Logan's brother Matt died in a car accident - and Reece was the one driving. Months later, Reece's father hasn't forgiven Reece, and Reece's mother hasn't stopped crying. Reece decides to join the junior fire fighting squad (his father is a lieutenant, and his brother used to be on the junior squad), after his brother made him promise as he was dying. Amanda is a member of the junior squad, and used to have a crush on Matt. Seeing Reece is like seeing Matt, and Amanda can't help but feel anger towards Reece. But Amanda slowly realizes that Reece might be just as "messed up" as she is. Junior squad is what is keeping them going, and when a series of arsons are connected in an eerie, Amanda and Reece will put everything on the line - even their relationship.

This book is written in dual, first-person perspectives, switching off between Reece and Amanda. Sometimes this works for me, sometimes it doesn't, but usually it does, especially with a couple (as opposed to best friends or siblings or worst enemies or something). I enjoyed reading from Reece's perspective especially - Blount does an excellent job of writing in the male and female perspectives, creating unique voices for each character. But I especially like Reece's voice.

Reece is an interesting guy, from the start. His brother is the more athletic one, the more likable/outgoing/charismatic one, the one that their father loves more. Reece is very intelligent, with photographic memory. He likes chess, isn't on the junior squad, isn't a bulky/ripped guy, doesn't have all the ladies after him. Reece is quiet and doesn't stand up to his father. He takes the blame for his brother's death and carries the burden and pain of losing a brother - and indirectly, a father - with him all the time.

And when he joins the junior squad, the juniors see the pain and loss. Lieutenant John Logan treats his son terribly, calling him a nickname he hates, picking on him when Reece wouldn't know, expecting him to be perfect, after only just joining. John leaves him and his mother. It's no wonder that Reece thinks that no one cares - and he begins to write his feelings down, in the form of a letter to his father.

Amanda... I think I like Amanda. I'm kind of on the fence with her. The reason why this book didn't get five stars is because of her. I had a weird feeling about her from the start, and she didn't exactly redeem herself for certain things as the story went on. I wanted to cut her some slack though. She's a well-developed character, and I can understand some of her thoughts and feelings, but I don't necessarily like her. She wasn't a bad protagonist though. I liked Reece much more.

Both characters develop and grow throughout the story - Blount writes the characterization and development of both Reece and Amanda well. Even though I was meh about Amanda, it was clear how she grew and matured. It was very obvious with Reece - without spoiling anything, I can say that Reece learned a lot about himself throughout the story. Reece is a complex and complicated character, and I think Blount developed and wrote him well.

This book had me close to tears for nearly the entire book! You know that's powerful because I literally do not cry for books, movies, TV, etc. I really felt for Reece. The scenes that Blount wrote involving Reece and his father - over and over, Blount captured loss and pain and regret and betrayal, in terms of the father-son relationship. I read this book on Father's Day - it was definitely a good one, given the holiday. Blount does an amazing job of injecting gripping emotions into her stories, and making the situations understandable and easy to relate.

There is so much more to the story than Reece and his father's relationship, and how it affects Reece's life on the junior squad, or his home life. Reece and Amanda begin to get closer, after a rough start. Reece begins to drift apart from his friend Alex, and isn't sure of how to fix that. Meanwhile, Reece is really enjoying junior squad, no matter the hard work and workouts that he has to put into getting into shape. And the bigger picture plot - a series of arsons has been spreading throughout the town, and it's related to someone in the story that we wouldn't expect. I love this mystery plot - I did not guess the culprit at all.

The romance wasn't my favorite aspect of the book, mostly given that I didn't like Amanda, but I liked the romance. It was a hate-to-love type of relationship, and I like those. Reece is a sensitive guy, not your macho type with cute feelings. He is sensitive and quiet and intelligent, but he has a hidden temper and he's determined, a hard worker. Amanda is in-your-face and in-your-business, and she doesn't want to like Reece. But they both fall for each other, despite everything.

This book ends pretty nicely, on all ends. I was surprised by who the culprit of the arson attacks was! And I was surprised with one or two others things, but in a good way. The ending made me very happy and a bit sad, too. We learn a lot about Reece, and I wanted to hug him so hard by the end of the book. Overall, I really liked this book!

Like I said above, I didn't really like or hate Amanda. She did things that I didn't like and couldn't forgive (I'm not Reece). But besides that, she just wouldn't be someone that I'd like in real life, I think. She's too callous. I understand that people have their own issues, but first impressions are everything, and I would have flipped her off and kept far away from her from the very first day. But then, maybe we're of similar temperaments and that's why. Or maybe not. Either way, I didn't really like/hate her. She was a decent character, but she wasn't a favorite, by any means.

I loved this book, and all of Patty's books (with the exception of Send - I own it, but have not yet read it), and I will definitely keep reading her books. I'm not a tough-issue contemporary fan, and this book deals with a lot of tough issues (especially with Reece, the poor guy!), and I know fans of contemporary will love this book. But this is one of those books that I wish everyone would read - dealing with feelings of not being wanted, suicide, etc. are definitely intense topics that need to appear more (and have been appearing more) in YA literature!

4.5 stars -> rounded down to 4 stars (see above). I really, really enjoyed this book! My second favorite Blount book, I think. I look forward to reading more from this author in the future!