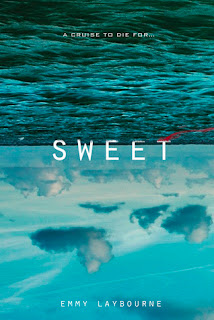 Emmy Laybourne, author of the Monument 14 trilogy, takes readers on a dream vacation that goes first comically, then tragically, then horrifyingly wrong!

The luxurious celebrity cruise launching the trendy new diet sweetener Solu should be the vacation of a lifetime. But Laurel is starting to regret accepting her friend Viv’s invitation. She's already completely embarrassed herself in front of celebrity host Tom Forelli—the hottest guy ever!—and she's too sick to even try the sweetener. And that's before Viv and all the other passengers start acting really strange.

Tom knows that he should be grateful for this job and the chance to shed his former-child-star image. His publicists have even set up a 'romance' with a sexy reality star. But as things on the ship start to get wild, he finds himself drawn to a different girl. And when the hosting gig turns into an expose on the shocking side effects of Solu, it's Laurel that he's determined to save.

This book was... odd. Really strange. I don't think I've read a book like this. I've read Monument 14 - I think Laybourne is really great at creating worlds that are destroyed by horrifying disasters. In this case, it's a nutritional supplement - a sweetener - that drives people crazy.

Laurel is going on an expensive cruise with her rich friend, who wants to lose wait. Vivika's father is paying for them both. This cruise is sponsored by the makers of Solu, a new nutritional supplement that has not yet been released in the market. The people of the cruise will be the first to try it. Solu is designed to help people lose weight - no matter what you eat. It is put in the dessert. At first, it's totally working! People are losing weight rapidly, and celebrity teen star Tom Fiorelli has interviewed countless people on the cruise who love Solu. But things take a dark turn when people get addicted to Solu, and will do just about anything to get more. Laurel, Tom, and the few others that did not try the sweetener must figure out how to get off the cruise before it's too late.

This book was mad creepy. From the start, it had goosebumps. The funny thing is, this book didn't start on a dark tone. I would say that this book started on a comical, almost awkward tone. Laurel is a size fourteen and most of the people on the cruise are must smaller in size than she is - as well as most of them are minor celebrities. Laurel is totally comfortable in her body, but her friend Viv is not (hence why Viv is there - and she invited Laurel for the mortal support). So this book starts off really funny, but then gets dark and creepy. Laybourne did an excellent job with setting the tone.

I think I liked Laurel, throughout the entire book. I love that she is comfortable with her size and feels no need to slim down. At first, she doesn't take the Solu or desserts because she was seasick. But then she gets better and still doesn't want to take them - good for her! She sees everyone losing weight and yet, she still does not care about changing her image. You go, girl!

Tom is the other protagonist of the story. This book is written in first person, alternating points-of-view (between Laurel and Tom). Tom was a child celebrity, and wants to be the next Ryan Seacrest. Everyone knows him as "Baby Tom-Tom", but he wants to be known for more. He used to be super chubby, but with careful dieting and an insane amount of exercising, he is muscular and fit and refuses to try Solu. I liked Tom. He develops a lot as a character, from start to finish. At times throughout the book, he was a bit cowardly, but he grows a spine.

This book is well-written, in my opinion. I have no idea how in the world Laybourne came up with this idea, but good for her. The world-building is solid, with the setting taking place over seven days on the cruise. Seven days! Laybourne takes us through almost every minute of the seven days (it might have been six, actually), so it feels like an eternity passes. And there is a HUGE difference between day one and day six.

The plot is very interesting and very, very creepy. I was creeped out by a certain point, and then it just got even more creepy. I won't say anything specific, but this book gets really weird. The thing is, I could see it being plausible. I could see this happening in our world today, over drugs or marijuana or addictive substances. In this case, it's a nutritional supplement designed to help people lose weight almost instantly. The physiological reaction to this supplement is terrifying. The reasoning behind the creation and marketing of the supplement is equally as terrifying.

I want to say I liked this book... I couldn't stop reading, I had to know what would happen. But I'm not sure I enjoyed it. I'm a bit disturbed (which is probably what the author is going for), and I can't see myself reading this one again. But woah.

Like I said, this book is creepy. And I'm a bit disturbed. I think that's the effect the author is intending, but I just... some parts of this book made me gasp out loud. Creepy! Weird! Insane! Woah! I feel like this book is totally plausible in real life though! But... it's so hard to see and read.

I didn't quite like the romance. There IS romance! Laurel and Tom are a thing, even after only six days. Tom sees Laurel and thinks she is quite "real" and not like celebrities or famous girls he has been set up with in the past. Laurel has always had a crush on "Baby Tom-Tom", but it's the type of crush you have on Channing Tatum or Luke Evans. Anyway, I'm not sure if I like the romance - it was very fast and I'm not sure I understand the basis and foundation of the romance. And then, I feel like Laurel falls fast and deep too quickly - calling Tom her "boyfriend" within days. Did they ever discuss this? You can't just call a guy your boyfriend, no matter how you feel about him. Especially if he's a popular celebrity with an important public image or whatever. Everyone probably calls him their boyfriend. Anyway, I wasn't really feeling the romance.

The ending. Um. The ending. First, I would have liked more detail on Viv. I won't spoil anything but I'm not sure what happened to most of the passengers on the ship (maybe it just wasn't clear to me). Also, the ending is very inevitable and predictable - I couldn't see this novel ending any other way (then again, I'm not the author), but that doesn't mean I necessarily liked the ending.

Ugh. This book. I couldn't stop reading, but I don't know if I liked the book. It's a very well-written story! Just... probably not one for me. I'm a bit disturbed by the story. Again, probably the intended effect!

Um. Read at your own risk? There are a lot of reviews on Goodreads that are pretty furious about this book, and there are reviews on Goodreads that are really intrigued! I'm in the middle because while I recognize that this is a very well-written book, I don't think I enjoyed it. I have no idea, really, so it gets three stars, right in the middle. It's not a must-read book, but it is quite a... gripping novel. I'm glad I read it, I won't be able to stop thinking about it, but gosh, I don't think I could read it again! It's a standalone, and it wraps up well as a standalone. So there's that.

3 stars. Laybourne's books are so raw and apocalyptic! Perhaps I'll be prepared for all kinds of disasters and crises, thanks to Laybourne and her strange books. This book is definitely going to stick around in my brain for a while - it's creepy and intriguing and a bit disturbing!