Review: Most Likely to Succeed by Jennifer Echols 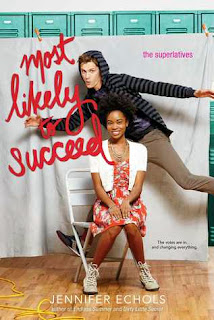 Ahhh, this book was a bit of a disappointment. It was good, but disappointing compared to Biggest Flirts or Perfect Couple. I really, really enjoyed those two, and could not wait to experience Sawyer's story. I liked Kaye in the previous books, but Sawyer was who I was concerned about. Also you really can't go wrong with Echols.

Kaye is a model student - perfect grades, perfect transcript, perfect extracurricular activities (including student government AND a sport - cheer-leading!). To be honest, she is very much like me in high school - I was also the same meticulous, slightly obsessive, perfect person. I would say that I still am, but everyone here at Hopkins is, so who knows. Anyway. Kaye is dating Aidan, the student government president, valedictorian in the running (against Kaye), and a general pain in the butt. Kaye has been annoyed with him for a while... and then she hears about her and Sawyer getting the vote as Perfect Couple That Never Was. Kaye develops feelings for Sawyer, feelings that were already there... on both sides.

This series is cute, but this book is probably the cutest. For most of the book, Kaye is "dating" Aidan - I have that in quotes because they're a couple, but Kaye can't stand him. He is demanding and controlling and doesn't like it when he doesn't get his way or when someone else has a great idea. Too bad his girlfriend goes toe-to-toe with him, in academics, student government, etc. Kaye eventually grows a backbone and speaks her mind to him (she usually let things go). And then things go way south with Aidan.

All the while, her issues with Aidan open up opportunities for her and Sawyer to get closer. Sawyer has a reputation for hooking up with girls left and right - he's the high school's "bad boy". In a pelican suit at games (he dresses as the school's mascot). I'm not sure if I liked Swayer in this book. He didn't seem like himself, from what I saw in Biggest Flirts and Perfect Couple. In this book, he seemed a bit juvenile. I didn't find much depth to him, even with his sob story.

But Sawyer was an interesting character, even if I found him to be a bit juvenile/immature. He has been through a lot, with no mother, deadbeat father, and no other family. He bounces around in terms of shelter (we can't even call it homes), and eventually ends up staying in Harper's mom's B&B restaurant (there are rooms there to live in!). I felt bad for him!

Kaye and Sawyer are a great couple! It takes them forever for them to realize that they are good together and good for each other (really, it takes KAYE forever - Sawyer already seemed to realize that he likes her a lot, from the beginning). You'd think the romance would be weird since Kaye is dating someone for a good portion of the book, but their breakup is inevitable. You could feel it from the first and second book in the series! Anyway, the romance is sweet (and bumpy too though), and there is a little bit of chemistry, though I wouldn't say much.

Overall, the book was okay... stay tuned for the big things that I didn't like about the book, that really detracted from my overall opinion of the book.

Kaye in general kind of bothered me. Something about her, I didn't like. Maybe because she was basically a doormat for most of the book? And not only in terms of her boyfriend (ex-boyfriend), but also in terms of her parents (specifically, her mother). I'm not saying I would be defiant at every turn and fight with my mother, but I would VOICE my opinions and concerns, even if it wouldn't make a difference. Kaye never voices her opinions with her mother - she never pushes for her mother to listen to her. She just silently hates how her mother is, but does nothing about it. Girl, you are not mute.

On the subject of Kaye's mother - let me tell you. I understand parents like her mother. Overbearing, controlling, domineering, loud, rude, stubborn, know-it-all. My mom is kind of like that (or used to be). I get it, and I know this type of parent is real. But Kaye's mother really, REALLY bothered me. I HATED her, and if I were her child, I probably would have launched a vase at her by age seven or something. Kaye's mother's attitude very much took away from the story, and made the book worse. Yes, she is (somewhat realistic). But including her and her negativity and borderline verbal harassment (disguised as tough-luck, no-nonsense mother) was not amusing, and really brought the story down. This book was no fun to read, with Kaye's mother. The mother has a serious attitude, hates Sawyer, hates Kaye's choices, controls where Kaye applies to college, what extracurricular activities she does, how much time she spends on homework, who she dates... again, I know this type of parent exists (my mom used to be like that), but this CRAP really brought the story down. And the fact that Kaye always kept silent (beginning to end) and didn't stick up for herself, let alone Sawyer? Pathetic. Also very detracting from the quality of the story, as well as how much I enjoyed it.

Seriously, this book is losing stars because of Kaye and her mother. Not fun to read. Not a good character arc - or plot arc. Making the mother a villain like that? Didn't work for me. It's an okay story, but it's really bogged down by the parent llama drama. Kaye's mother hates everything and everyone, including Sawyer. So... this story wasn't fun to read, though everything not tainted by the mother was very lighthearted. Towards the end, the mother plays a more and more important role in the story, and it just goes straight to the garbage by the end of the book. I didn't like the ending - too much drama, and then too much happy.

And then there was the fact that I found Sawyer to be immature. Yes, he was a goofball in the first two books. But now that we have him up close and personal, I expected... more. Well, I guess I can say that he is an IMMATURE goofball. The "player" side of him doesn't seem to fit at all.

Nah. I mean, maybe. I liked this series, and I thought this book was okay, but I'm not sure I'd recommend it. I'd highly recommend Perfect Couple though, that book was good. And Biggest Flirts was good too! But this one is worth skipping. I know, I know, Sawyer. But he was so flat, as a character! And Kaye's personality - I didn't really like her much. So, there's that. This book was a bit of a disappointment!

2.5 stars -> rounded up to 3 stars. Disappointing, but good enough to get 3 stars. But it's more on the negative side of 3 stars. Echols could have done so much with this book! I didn't like how she portrayed Sawyer (immature boy!), or how big of a deal she made Kaye's mother. Find/utilize a different plot arc!