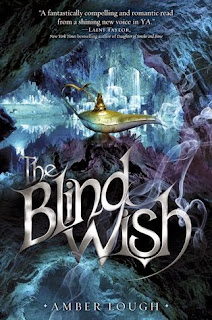 Ah! I just realized that this book is a July 14th release, not July 28th. When did that change?! I'm kind of meticulous when it comes to my review schedule, so this review is totally out of place (it's with the July 28th reviews, not the July 14th reviews, ugh)! Anyway, I guess in the long run, that's a good thing. This book is heading your way even faster!

In this novel, Zayele attempts to wish her half-brother Yashar into good health - she wants to cure his blindness, which was brought on in the desert (so it was kind of her fault, which is why she is desperate to heal him). But Zayele is no healer, and the wish goes poorly. Yashar is brought to the Cavern, and Zayele is now training like she should have been - as a magus. Meanwhile, Najwa is forced to avoid Prince Kamal, as he has accepted the position of vizier. With the war looming, Najwa must discover who is the third player in the war, the third side that is sabotaging the jinn efforts for peace. Neither sister can prepare for - or stop - the impending force of war that crashes upon the jinn - and the humans.

While I'm giving this book three stars, I actually really enjoyed the book. The story was great, if not a little slow. Lough digs deep into the story, and pushes along the series. Now that everyone knows about Najwa and Zayele, the sisters can each do their part and helping the jinn find peace with the humans - and stopping the war. Each sister has a distinct role to play.

I really like Najwa. She is depressed throughout this book, missing Faisal (her mentor), her mother that she never knew, and of course, Kamal. It's like everything has been taken away from her, and she has no one - not even her new sister, who forgets about her for most of the book (one of the reasons why I didn't like Zayele in this book). Najwa has lost so much, and is still fighting for her people. She is a million times stronger than her sister, through physically/magically, one wouldn't think so.

There is romance, though the romance between Atish and Zayele is more prominent than the one between Kamal and Najwa. Kamal and Najwa's romance is bittersweet, and it's constantly there, but neither of them can act on their feelings while Kamal is vizier, so physically, their romance is stoppered. Atish and Zayele are training to be a Dyad (kind of like parabatai in The Mortal Instruments). A Dyad is a member of the Shaitan (warrior - Atish) and a magus (powerful jinn in terms of magic - Zayele).

The plot is a bit slow, but things take off like a rocket in the last one hundred pages or so. The climax creeps up quickly and the story is over before you know it. High stakes, high action, towards the end! Make it to the end and you'll see that it's worth reading this one, despite the slow pacing of the first half of the book.

Zayele. I did NOT like her in this book, for so many reasons. One, she's selfish. She selfishly assumed that she could "fix" her blind half-brother, that he would want to be "fixed". She couldn't "fix" him AND he didn't want her to try. She tried anyway - selfish! And failed miserably.

And then she had the nerve to get angry with everyone else when Yashar is brought to the Cavern to be treated (she made his blindness worse). She acts like it's everyone else's fault but her own. Zayele does not ever take responsibility to her actions.

And then there's the fact that she's practically rewarded for being a stupid and powerful magus. Yes, she needs training, but she is so impulsive and ruins things time and time again. She deserves to till soil or something! She is SUCH a spoiled, conceited person!

She's also very entitled. Being the more powerful of the two sisters, she just assumes that she's powerful enough to do this or that, or that she can do this or that without needing permission. She is only concerned about using her jinn magic and indirectly showing off.

Poor Najwa! She has little magic, yet being a jinn is all she's ever known. And then her sister takes over her life, and is now a much more powerful jinn than Najwa could ever be. So heartbreaking for Najwa. Throw in the fact that Zayele is the WORST SISTER EVER, never remembering her sister throughout the book. Najwa is suffering from jinn depression and all Zayele thinks about is her powers and her upcoming Dyad bonding and basically everything that doesn't have to do with Najwa, or even the war. Najwa serves the jinn over and over, but Zayele is in this for the fun and romance. Her Dyad is going to be the boy she is falling for. Good for her.

It's obvious that I liked Najwa a lot more than Zayele. I just didn't like Zayele in this book. I struggled with her in The Fire Wish too. She's just a terrible person, forcing wishes on people that don't want them. Stop being selfish!

So, yes, this book loses two stars (it might have gotten five - at least four!) because of Zayele.


Despite my severe dislike of Zayele, I'd still recommend this book. I LOVED The Fire Wish, and I definitely enjoyed this book... minus Zayele. Too bad her perspective covered half the book (alternating chapters with Najwa). Najwa's story was more fleshed out, real, raw, developed. Zayele seemed like a toddler flailing around from start to finish. But hey, you might like her more than I did, who knows!

3.5 stars -> rounded down to 3 stars. I hope there is another book in this series? Though I can see this series ending as it does, because the ending of this book was quite satisfactory.