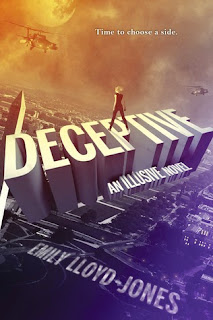 You don’t belong with us. These are the words that echo through the minds of all immune Americans—those suffering the so-called adverse effects of an experimental vaccine, including perfect recall, body manipulation, telepathy, precognition, levitation, mind-control, and the ability to change one’s appearance at will.

When immune individuals begin to disappear—in great numbers, but seemingly at random—fear and tension mount, and unrest begins to brew across the country. Through separate channels, super-powered teenagers Ciere, Daniel, and Devon find themselves on the case; super criminals and government agents working side-by-side. It’s an effort that will ultimately define them all—for better or for worse.

The first thought in my mind when I cracked open the review copy was: crap - I've forgotten most of what happened in book one, Illusive! I remember the characters, the general conflict, the world-building, but not a lot of specifics. For one, I don't remember very much of what happened to Daniel, in Illusive. I loved Illusive, but there are a lot of holes in what I remember. So I thought this book would be a struggle. Luckily, it wasn't!

In this sequel to Lloyd-Jones's stunning debut, Ciere, Daniel, and Devon are split up and fighting on each of their ends, on very different sides. People who are immune are being kidnapped, and the kidnappings don't seem random. Two individuals are of interest, and Ciere, Daniel, and Devon all have a stake in the arrest of these suspects. But each teenager is not prepared for the truths to be uncovered, for the limits that will be tested, for the lives that will be lost.

This book is written in three perspectives - Ciere's, Daniel's, Devon's. Ciere and Alan Fiacre (the boy who has the formula for the Praevenir creation memorized) are in the hands of Guntram, a powerful illusionist they owe. Daniel is in the hands of the FBI, with a man named Gervais. Devon has been offered an internship position in a small branch under the leadership of a man named Macourek. The three teens have gone in three different directions, willingly or unwillingly.

This book is written in third person POV, with three separate perspectives (each chapter has a different perspective). Ciere's was the most interesting, but I liked Devon's, too. Devon is kind of like a spoiled troubled rich kid who needs a bit of direction, so he is recruited to the for the small organization to work as an intern, doing data entry. Devon is spoiled, but he wants to work hard. Ciere is determined to protect Alan, even if it seems like the only thing he cares about is protecting the formula. And Daniel - he hasn't seen Ciere in quite some time. He's busy with the FBI, trying to figure out the mystery of the disappearances of immune people.

I think Ciere's character development is the easiest to spot, and I'm happy about the direction her characterization was taken. Ciere really learns how to use and wield her illusionist ability. She grows more comfortable with her own skin, and can do powerful illusions, under the tutelage of Guntram. I like Ciere a lot. She's tough, she's been through quite a bit, and she never stops.

There IS romance in this novel - YAY! I do remember mentioning in my review of Illusive how I wanted more romance in the sequel. Well, there is a subtle development in two people's relationship, which was really sweet. It wasn't super important to the plot, but it is clear as it develops. I love the pair! I can't remember much of their interactions in Illusive, but I love them in this book, little as they interact!

I'm quite happy with this book's story, characters, resolution, and even the subtle romance. I really enjoyed both books in the series. I'm not sure if there will be more books (probably not - the ending of this one was really wrapped up), but I wouldn't mind more. Nor would I mind if this series ended as is. I'll definitely be looking out for more of Lloyd-Jones's books in the future!

At times, this book was a bit slow. Also at times, I really struggled with not remembering things from Illusive. Overall, Lloyd-Jones made it so you really didn't need to remember too many specifics, but at the same time, the gaps in my memory were pretty large. Not necessarily a negative, on Lloyd-Jones's part, but a fair warning to readers.

I'd highly recommend this series! The original comparison for Illusive (which I usually hate, fyi), was something like X-Men meets Ocean's Eleven, which is a pretty hardcover comparison - and a good one, too. Lots of action, great world-building, hilarious characters, sweet romance. An all-around fantastic package!

4 stars. I'll be awaiting more novels from this author, whether they be sequels to this book, or new works! Lloyd-Jones has a knack for writing amazing world-building and unique characters. More, please!