Review: Of Dreams and Rust by Sarah Fine 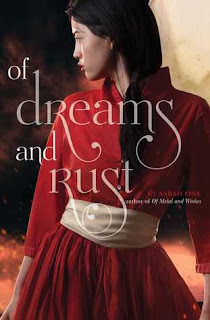 War erupts in this bittersweet sequel to Of Metal and Wishes, inspired by The Phantom of the Opera and called “relentlessly engrossing” by The Romantic Times.

In the year since the collapse of the slaughterhouse where Wen worked as her father’s medical assistant, she’s held all her secrets close. She works in the clinic at the weapons factory and sneaks away to nurse Bo, once the Ghost, now a boy determined to transform himself into a living machine. Their strange, fragile friendship soothes some of the ache of missing Melik, the strong-willed Noor who walked away from Wen all those months ago—but it can’t quell her fears for him.

The Noor are waging a rebellion in the west. When she overhears plans to crush Melik’s people with the powerful war machines created at the factory, Wen makes the painful decision to leave behind all she has known—including Bo—to warn them. But the farther she journeys into the warzone, the more confusing things become. A year of brutality seems to have changed Melik, and Wen has a decision to make about him and his people: How much is she willing to sacrifice to save them from complete annihilation?

Bittersweet, indeed. The synopsis says it all. I am very pleased with the ending of the series, with this novel, but I can't help but feel slightly sad about this book. This book ripped me to shreds, and by the end, I was in emotional disarray. So much happens to Wen, from zero to one hundred to zero and back to one hundred again, in so many aspects of her life. There were things with which I was not entirely pleased, and there were things that melted my heart and made me smile. This book was a pleasure to read, even in its bittersweet loveliness.

This novel picks up a year after Of Metal and Wishes ends. Melik and the other Noor have left, and Wen stays with her father to continue aiding the injured in the factories, and keeping Bo company. A year passes but Wen never stops thinking of Melik. As the war draws closer, Wen makes the decision to warn the Noor. But when she is captured by the Noor and taken into Noor territory, she begins to realize that there is no good or bad side to the war - the Noor are just as guilty as the Itanyi in hurting and killing. Melik does not seem to be the same Melik who left her. But Wen is determined to lessen the pain and suffering of the war, and she wants to help the Noor. But the war could cost her everything that she loves, and more than she is willing to lose.

I loved Of Metal and Wishes, and I was really excited to see that this series would only be a duology, and nothing longer. While I found this book to be bittersweet (especially towards the end), I absolutely loved the book. There are scenes that I can pick out from memory that made my heart hurt, in a good way. So many sweet scenes. So many heartbreaking ones.

Wen is a brave and strong character, in her own way. She isn't physically strong, like a Noor soldier, but she is mentally strong and capable. She is more than willing to offer her services as a doctor/healer to the Noor who are injured throughout the journey and in the war. Wen is scared and indecisive sometimes, and she is kind and selfless. What really bothered me about her was her indecisiveness in some situations, but it wasn't childish indecisiveness. I liked how Wen thought, how she approached situations, even if I didn't like how she wavered. She figures things out on her own pace and terms.

Melik! It's not too long before Wen and Melik are "reunited". I put that in quotes because while they are brought back together in terms of physical distance, there is an emotional barrier between them. Melik is forced to take Wen to his Commander and his General, as she is Itanyi and in Noor territory. It broke my heart to see how Wen was treated by some of the Noor soldiers, even as she cared for them. But Melik did his best to take care of her subtly, though she did not always notice. Melik! He lost and loses so much, yet he never stops fighting for his home, his family, his people.

I love how different the Itanyi and Noor are. I love the way Fine creates both cultures and people, how different the customs and traditions are. This leads me to comment on the world-building - this series has a setting that I've never read or seen before. I think Fine does an amazing job of creating the world and setting, especially for it to be so lush and original. Most of this book takes place in Noor territory, and I really enjoyed seeing things in the Noor world, with Noor customs. Fine masterfully creates this world, setting, characters, plot. The Noor world is a harsh one, and there is some violence and gore that really lends to the reality and harshness of the world and war.

This book is relatively short, but a lot happens in this story. The war is brewing and storming, and eventually, everyone must stand and fight. The war is inevitable, but Melik's, Wen's, and even Bo's role in the war is surprising, each one. I like the direction of this story, and I like how the climax kept building until the end.

The end! Oh, it was somewhat sad! For several reasons. There were some deaths, there were some death scares, there was a lot of pain and sadness. So much grief to pass around, yet the ending itself - the last few pages - were very uplifting. Honestly I think this book ended very well, but like I've been saying very bitter-sweetly! I loved the ending.

The romance was achingly beautiful! I feared a love triangle with Bo and Melik vying for Wen's affections and Wen caught in between, but I didn't really find that to be the case. There is only one man that captured and held Wen's attention from the start of the series. Bo and Wen are friends, and it is clear that while Bo might see Wen differently (since she is the only female he ever sees), he is meant to be a strange (and strange one, at that). Melik and Wen simmer and burn together, breaking each other's hearts and having me swoon left and right.

Overall, I really enjoyed this book. This is my seventh Sarah Fine novel, and it is just as one would expect from Sarah Fine! She is so talented.

Like I mentioned above, I didn't like Wen's indecisiveness in some matters. I can't say more, but I wish Wen were the tiniest bit more decisive sometimes? And the Itanyi in general are poor at communicating. You all can do better! But this is something that makes the Itanyi the Itanyi, and Wen wouldn't be herself otherwise!

I would totally recommend this novel! I'm not even sure how to categorize it, it's so distinctive and original. I absolutely love the world-building, characters, romance... there is something that could draw just about everyone! I really enjoy Sarah Fine's books in general, but there is something about duology that I like the most!

4 stars. Another Sarah Fine success! Up next for me is Claimed, and then Burn, and then Fated. And then The Impostor Queen! I have yet to read a Sarah Fine book I didn't enjoy. That's not a challenge!