Review: The Heart of Betrayal by Mary E. Pearson 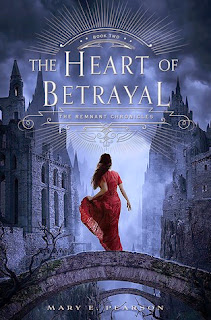 I'm half-tempted to just leave this review saying, "GO READ THIS SERIES NOW". Seriously, the struggle of writing a review for a book you really, really enjoyed. This book is super close to five stars - The Kiss of Deception was a five-star read for me - but it came just a wee bit short. Still, I LOVED this book. I cannot wait to read book three.

In this novel, Lia and Rafe are taken to Venda to live at the mercy of the Komizar. Lia has no allies in Venda, though she starts to build small alliances with unexpected citizens. There is something about Venda that is unlike anything Lia has experienced. Her gift changes and starts taken shape. Lia begins to see things in Venda that she has n seen before. All the while, Lia has drawn the Komizar's interest, and not a good interest. Rafe lies his way into staying alive, with everyone believing that he is the Royal Emissary of the Dalbreck crown prince. With each passing day, it is clear that there are no rules to survival, and both must do what they can to have a chance at escaping.

I had a bad feeling about this book, initially. We're on Kaden's home turf, which led me to believe that the love triangle would grow more strong, fueling Kaden's feelings for Lia, and possibly having Lia develop deep for Kaden. Sorry, Kaden fans. The romance isn't straight and clear-cut, but it's no longer a love triangle. Lia uses Kaden to survive, and while she feels guilty, she doesn't feel love. There are no rules to survival.

Continuing on the vein of the romance. It seems like EVERYONE is in love (or in lust) with Lia. The Komizar is around Lia, Kaden, and Rafe's age, and he becomes interested in her too. But his interest is more in power - the Vendan people begin to see Lia as a divine sign of some sort (because of her gift), and Lia works hard to build a good reputation and relationship with the people. So we have the Komizar, Kaden, and Rafe all vying for Lia's hand.

Of course, the Komizar has zero shot (he's the villain - or one of them). In my opinion, Kaden NEVER had a shot (not even in The Kiss of Deception), but that's just my opinion. In this book, it becomes very, very clear who Lia has feelings for, who Lia cares about, etc. It's stated in her thoughts, how she loves one and how she cares for one. Two totally different emotions going on, and Kaden is not on the receiving end of the emotion he wants. I believe Kaden truly loves her, but it seems like a blind love. Honestly, Kaden's feelings for Lia seem more like obsession or fascination. And Lia... she cares about him, but not like that.

Rafe. Oh, Rafe. I loved Rafe in The Kiss of Deception (I think I was one of the few that knew prince from assassin), and I love him even more in this book. Both he and Lia do terrible things to survive, to fight for each other, to keep each other alive - especially Lia. Rafe has a good heart, but he is also fierce and clever, calculating and, well, a bit impulsive. He and Lia both don't have patience. Rafe could chop up Kaden in a heartbeat, but he never does. He's smart like that.

I don't really feel much for Kaden, if you didn't notice. We get a lot of backstory in this book for Kaden (and the Komizar, too), but I don't really care all that much about Kaden (or the Komizar). I'd love to push Kaden towards Calantha, or Pauline.

So, in my opinion, the love triangle (or potential love triangle, however you saw it in The Kiss of Deception) is pretty much resolved in this book. The emotional romance is pretty clear-cut in this book. There are some things that made my heart ache for Lia, but once you read the book, you'll get it. I respect her for all of her decisions.

The romance between Rafe and Lia heats up in this book. Lia is still angry at Rafe for deceiving, and Rafe is angry for the same reason, and there is plenty of tension between them. But at the same time, they both care about each other, and fell in love with each other, and fall in love with each other all over again. Imprisoned, forced to play roles and deceive everyone and act like they hate each other - and yet, they still fall deeper for each other. It's sweet! And sizzling. Wink.

On to the story, sans romance! I feel like not much occurred in this book, in terms of the war and such. Venda has been massacring enemy camps and soldiers, killing many and taking supplies. It's awful, and in my opinion, hard to feel sorry for Venda. I do, but I don't. It's obvious that Pearson wants readers to fall in love with Venda - she spent so much page time describing Venda, having Lia convinced that it's not all bad, etc. I wasn't really buying it, but then, I don't really care for Venda or Kaden. I'm more curious about Dalbreck.

Venda is like a bubble, and Lia and Rafe don't really know what is happening outside of Venda. Short snippets of news might pass around, but the war and policies and declarations aren't made known often. So, in my opinion, the SERIES plot was slow. The book's plot mostly focused on Lia and her relationships with the Vendan people, the Komizar, Kaden, and Rafe. A lot with Rafe.

I like the mysterious "gift" part of the series plot though. A lot of it revolves around Venda, curiously. And yet, I feel more lost, in terms of Lia's gift, and its connection to Venda. Hopefully all will be explained in book three.

Book three! I need it! The ending of this one wasn't TOO cliffhanger-like, but it makes me anxious. Not for Lia and Rafe, but for the kingdoms. I actually like the ending (I think), though the fact that there are so many perspectives (since The Kiss of Deception though) makes me wonder if the author is going to pull a Veronica Roth...

I wish things Lia had to do didn't have to happen. It's not like in A Court of Thorns and Roses, between Rhysand and Feyre (sexual assault, rape, anyone? How in the world is anyone finding Rhysand sexy?!), so no worries about that. But I wish things were different! Of course, there are no rules to survival.

Anyway. YES. I would totally recommend this series in general. This sequel novel is great! I loved The Kiss of Deception, and I really enjoyed this book. Now, as long as the love triangle is officially dead and Rafe and Lia can ride off into the sunset from start to finish of book three (that might be an exaggeration)... I'll be happy. Maybe. Perhaps I want Venda to burn a little too. And maybe Morrighan too.

4.5 stars -> rounded down to 4 stars (for a reason I can't say without spoiling things!). Overall, I'm really pleased with this book, especially with the romance. I definitely want to see more from the series plot (and not just the romance - stop pushing the triangle, Pearson!), so hopefully there will be an epic showdown in book three! I have a feeling that Pearson will take us to Dalbreck - finally!