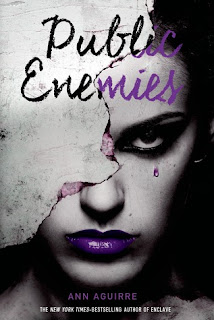 In Book 2 of the Immortal Game trilogy, Edie must learn the rules of the game . . . and then play better than anyone else.

Through a Faustian bargain, Edie Kramer has been pulled into the dangerous world of the Immortal Game, where belief makes your nightmares real. Hungry for sport, fears-made-flesh are always raising the stakes. To them, human lives are less than nothing, just pieces on a board.

Because of her boyfriend Kian's sacrifice, she's operating under the mysterious Harbinger's aegis, but his patronage could prove as fatal as the opposition. Raw from deepest loss, she's terrified over the deal Kian made for her. Though her very public enemies keep sending foot soldiers--mercenary monsters committed to her destruction--she's not the one playing under a doom clock. Kian has six months...unless Edie can save him. And this is a game she can't bear to lose.

I'm actually not 100% sure how I feel about this book. There was no doubt that I would finish it, because I was engrossed in the story while I was reading. But I'm not sure if I fully understood and enjoyed what I was reading. This series in general is weird... this book is weirder than Mortal Danger. I'm not sure if that's a good thing or bad thing.

In this sequel novel, Edie Kramer is desperate to find a loophole to save her boyfriend, Kian. He sacrificed his life for hers, and he will die in a few short months because of the deal he made. But Edie isn't going to take no for an answer, nor is she going to quietly do as she is told by the Harbinger (who is supposed to protect her, courtesy of Kian's deal). Armed with a new and deadly weapon, Edie is more dangerous than weak, and the immortal players of the game fear her. But Edie's battle isn't just with the gods and immortals, but also with Kian's deal to save her. Can she save him?

This book departs completely from the story of Mortal Danger - it's no longer about getting revenge on her classmates. Few characters from book one are present in this book. The plot is completely different - it's all about playing the immortal game, and staying alive. Everyone seems interested in Edie, but Edie is interested in spending time with Kian, trying to find a way out for him, and getting her dad to less of zombie, after her mother's murder.

I can't say I really enjoyed the story... Edie was an okay character, though I barely see any of who she was in Mortal Danger, to be honest. Her voice is just another bland YA female voice, to be honest. I liked her in Mortal Danger, but I was feeling kind of meh towards her in this book. I guess she's kind of kickbutt, but she's not a favorite of mine. Still, better than a whiny YA female.

One thing that I REALLY liked was the Harbinger. I am intrigued by that guy. He's probably a gazillion years old and he can take on any face he wants, but I like him. I bet his hair is soft (this is totally relevant). I would give him a hug! Yay lovable villains.

In general, the story is interesting and well, creepy, which I think the author wants. I don't know if it's this series is my thing (I don't do horror or even low-key creepy books) but I'm intrigued. I am HIGHLY interested in the third book, despite how this one went for me. The ending of this book is INSANE and then WACKY - two events are incredible shocking and I really want to know how things end!

What I Did Not:

One of my biggest issues with this book seriously hindered my ability to really enjoy the book - I couldn't remember much of what happened in Mortal Danger, and I struggled to keep up. The author didn't do a good job of slowly recapping events from book one, so there were a lot of times when I was like, wait. Edie's mom was murdered? Kian bargained away his life? Does xyz friend of Edie's know about the immortal game? Does Edie's father? All of these things (and more) happened in/were details of book one, and yet, I couldn't remember any of them! So I was surprised a lot as I was reading this book, and it had nothing to do with this book - more so, with book one. I needed to reread book one - or the author didn't recap things well.

So this really hurt how well I could enjoy the book. This could have been a "me" problem, I realize that. But I didn't enjoy the book was much as I'd hoped because I was hopelessly confused. Still, the story was good. I just didn't really follow where things were going. Especially since the few things that I DID remember - Edie getting revenge on her classmates - didn't show up in this book basically at all.

In general, this book is strange. I didn't quite remember that this game involves immortals and gods and whatnot, so that took me aback. And spirits - there is a creepy plot associated with spirits. I didn't care for that and was totally weirded out.

Kian is pathetic in this book! I didn't find him strong or brave or kind or even swoony. He knows he has a time limit, but literally all he and Edie do is argue and fight, and it's annoying.

So, the romance is... meh. No real swoony scenes, though Kian and Edie take their relationship up a notch. The bickering and fighting and miscommunication really turned me off. Edie doesn't trust Kian for whatever reason, though he loves her so much. Ugh!

Meh. Maybe. I don't think this book was disappointing, but I didn't really enjoy it as much as I'd hoped. I really, REALLY liked Mortal Danger though, and I'm really, REALLY excited to read Infinite Risk, despite not liking this one much. So, sequel slump?

3 stars. The meaning of sequel slump! When you want to like the book because you liked book one, but it just isn't happening. But I absolutely will still read Infinite Risk - I must know what happens!