Review: All the Ways to Ruin a Rogue by Sophie Jordan 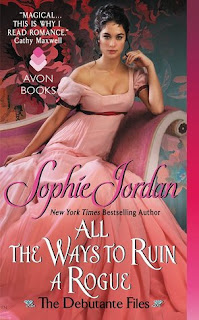 There was once a lady who loathed a lord...

Lady Aurelia hasn't always hated Max, Viscount Camden, her brother's best friend. In fact, as a besotted girl, she thrived under his kind attention – sure that he was the most noble and handsome man in the land. Until her young heart discovered what manner of rogue he really was. Now, though she enjoys nothing more than getting on his last nerve, she can’t deny Max drives her to distraction—even if she tries to pretend otherwise.

...and a lord who was confounded by a lady.

Max cannot recall a time when Aurelia did not vex him. If she was not his friend’s sister, he would stay far away from the infuriating vixen. Unfortunately, they are always thrown together. At parties and family gatherings…she is always there. Infuriating him, tossing punch in his face, driving him mad...until one night, she goes too far and he retaliates in the only way he can: with a kiss that changes everything.

I wanted to like this one more! Two stars isn't the worst rating, but I finished this book with a feeling of disappointment and discontent. My problems with solely with Aurelia - I seriously do not like that girl and she pretty much ruined the book for me. Nevertheless, I thought the story was okay, and I LOVED Max.

Aurelia has two options: get married in the next few months, or move to Scotland with her mother at the end of the season. Her older brother and his wife are having a baby, and Aurelia will be a burden and a spinster old maid if she stays. So she sets out to get married. Max needs to clean up his act too - he's been caught yet again with someone's wife. Max and Aurelia have a bad relationship, ever since they were little. Aurelia antagonizes Max at every turn, the boy who she used to love, but never saw her as more than a friend, and then enemy. But there is a fine line between hate and love, and there is much more between Max and Aurelia than they think.

I didn't like Aurelia, and I will list all the reasons in the next section. I LOVED Max though. I think his character was a bit rough and could have been seen as cliche, but I liked the tortured hero thing going on. Max had a terrible childhood, and it shows in his present personal life. He doesn't want to love anyone, he doesn't want children, he doesn't want to fall in the trap of feeling anything for anyone. Which is why he goes from woman to woman, and doesn't want to marry.

I felt bad for Max, throughout the entire book. Aurelia is a witch and drew a caricature of him when they were in their teens, with him having a small, um, package. She was angry because she saw him getting impersonally intimate with a maid. She was sixteen, in love with him, and got angry at him. At this time in history, he saw her as a friend, nothing more. So she threw a tantrum, drew a picture of him with a small you-know-what, and ruined his reputation. Again, witch.

The romance isn't as steamy as one would expect for a historical romance novel, or for Jordan. Probably because most of the book is spent with Aurelia and Max hating each other - it takes quite a long time for Max to feel something other than annoyance towards her. Aurelia always liked him, but held a grudge (for no reason, mind you - it's not like they were engaged or he owed her). So the romance wasn't steamy. The chemistry was took a while to boil, but ended up being pretty hot.

So the romance was blah, the female protagonist was blah, the story was okay but not amazing. I did like some of the plot arcs in this book - but I can't say anything specific about them because that would be spoiler-y! But I like what Jordan did towards the end. Anyway. On to the dislikes.

I did. Not. Like. Aurelia. Borderline HATED her, really. From the start, I wanted to choke her. How dare she ruin Max's life like that, just because he was having sex with a maid/someone that wasn't her?! Max and Aurelia were NOT engaged, or promised, or anything at this point! Max and Aurelia's brother were friends, so Max saw Aurelia as Will's little sister. Aurelia was stupid in love with Max, and I suppose she expected him to be in love with her too. UGH. And then she goes and does that stupid thing with the caricature, ruining his reputation for years.

Aurelia is quite possibly the dumbest historical romance heroine I've read about. I think I liked her in A Good Debutante's Guide to Ruin, because she seemed intelligent and clever. In this book, she seems dumb and senseless. She continues to create the caricatures, or misbehaving ladies, cheating lords, etc. Dumb dumb dumb. Aurelia claims it's her hobby, the only thing keeping her occupied. But then her brother and sister-in-law announces their pregnancy, and she realizes that she needs to catch a man.

Problem? Yes, because Aurelia is as prickly as a porcupine and no one wants her for more than her breasts and behind (apparently she's not pretty, but she is curvy). Throw in her awful, high and mighty attitude, and no man (especially given this time period) would want her. UGH! She is a terrible person! I wouldn't want her either, if I were a gentleman looking for a wife!

And she goes and hurts Max over and over again - the scene at the lake was mortifying and enraging. The author tries to paint the lady that Max was with as a cruel woman, which is supposed to make Aurelia's actions excusable. NO. Aurelia is a b****. And a dumb one. She doesn't even realize how stupid and cruel she is. UGH.

I have a lot of frustration with Aurelia. Mostly, I can't believe Max would want her (or want to be with her), because he pretty much hates her the whole time. Jordan definitely forced this story in this direction, so it seemed choppy and fake.

I could go on, but I won't. One last thing - what is up with these titles? They make no sense! A Good Debutante's Guide to Ruin was not at all in any way a good debutante's guide to ruin. This book in no way enumerated all the ways to ruin a rogue. This is a small thing but ugh!

Sadly, I wouldn't recommend this book. I like Jordan's books (I've read some of her YA, NA, and adult), but this one was a hot (and awful) mess. The female protagonist really deserves to be a spinster. I know fans of Jordan are going to want to read this one, but if you're not really familiar with Jordan's historical romance novels, don't bother with this one.

2 stars. I wanted to like the story! But Aurelia and her terrible personality ruined it for me. Still, I suppose I could have given this book one star. Oh well. I'll probably read the next book in the series (if there are more?), because I liked the first one (A Good Debutante's Guide to Ruin), but this one was no good.