Review: The Highlander Takes a Bride by Lynsay Sands 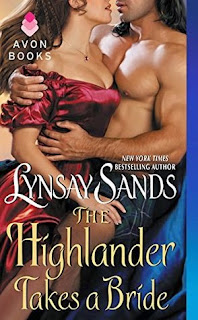 Sword fighting, swearing, and riding astride come naturally to Saidh Buchanan. Simpering and holding her tongue—definitely not. Raised alongside seven boisterous brothers, Saidh has little interest in saddling herself with a husband... until she glimpses the new Laird MacDonnell bathing naked in the loch. Though she's far from a proper lady, the brawny Highlander makes Saidh feel every inch a woman.

She has an angel's looks, a warrior's temper, and seeks out his kisses with wanton eagerness. Little wonder that Greer is intrigued by his comely guest. When reckless desire overtakes them, he's more than willing to make an honest woman of her. But Saidh is the target of a hidden enemy, and Greer faces the battle of his life to safeguard the woman he wants above all others.

First, let's get the chuckles and giggles out of the way. YES, the cover is a bit cheesy. Very cozy, but very cheesy, reminiscent of the covers from thirty and forty years ago. Greer is definitely meant to be that big and muscular, but goodness. The guy on the cover is meaty. The cover definitely fits Greer and Saidh though - they are a passionate and steamy couple! But the cover is, um, cheesy. Hehe.

Also, a huge thanks to my lovely friend Racquel for bringing this book to my attention! I would have passed it straight on Edelweiss, sadly, because of the cover. I know, bad Alyssa. Sad face.

Saidh is the youngest of eight children, with seven older brothers. She knows how to ride a horse well, use a sword, and swear like no other. Saidh is sent to the MacDonnell properties (castle?) to comfort her cousin, whose fourth husband, Laird MacDonnell has just died. The new Laird MacDonnell (cousin of the dead one), is fierce and dominant, all power and strength and cleverness. Sparks fly between Greer and Saidh, and nothing stops their passion from igniting. But danger lurks in the castle, and Saidh is not safe within its walls. Was Allen (the former Laird MacDonnell) murdered? Is the murderer looking to kill Saidh?

This book was HAWT, guys. Steamy, sizzling chemistry scorched the pages. Saidh and Greer see each other, fall in lust, have a few interactions, but then go straight after what they both want. Neither of them are afraid to give and take - even Saidh, who is unmarried and a virgin. I love this dynamic! Saidh doesn't see herself as "ruined" after being with Greer - good for her.

I liked Saidh a lot! She is feisty and strong-willed - as she should be, with seven older brothers to fight with her. She manhandles Greer and proves that she isn't a light-skirt or simpering lady - not that she needed to prove this to anyone. She is neither of those things, and she owns it. A but of a tomboy who also discovers some of her more feminine qualities she didn't know she had, thanks to Greer.

Greer is hilarious, and quite likable as well. He is nothing short of an alpha male, but he is also caring and sensitive, and never tries to change Saidh or make her dress or act a certain way. He likes her eccentricities, and he likes her. I liked him a lot!

The romance is very steamy! I have not read the other two books in this series, nor any of Sands' other series/books, but I found this book to be quite sizzling in terms of chemistry and intimate scenes! But tastefully done by Sands. Very well-written! But besides the chemistry - the romance is really developed. It's insta-lust to a progression of feelings. I like that neither Saidh nor Greer admit to loving each other prematurely, and are totally aware of this. But they do fall for each other slowly, and it is very sweet!

There is a mystery plot to this book! The romance is not the only important part of the book. Did Allen die of drowning by accident, or was he murder? And who is now trying to kill Saidh? Is Fenella's terrible record of husbands (she has buried four husbands in as many years) cause to believe that she is behind everything? Secret after secret is revealed, and the killer is not who we think it could be! I love the climax and the big reveal. I was pretty surprised about certain things!

Overall, I really enjoyed this book! I want to check out Sands' vampire series - there are over twenty books in the series! But vampire adult romance novels might appeal to me, who knows. In any case,t this Scottish historical romance novel was pretty amazing!

I almost wish there were more suspects to choose from! I know that sounds weird. In the end, there were only three... it would have been interesting to add more players to the "game", to add layers to the suspicion. But then the book would have dragged on. So never mind?

4 stars. I'm so glad Racquel pushed this one on me! I wouldn't have thought to download it from Edelweiss at all. I've been craving a good Highlander romance recently! What would my life be without this book!? Thank you, Racquel!